Does it really matter what Balmain throws down the runway anymore? The label, which is just months removed from an H&M collaboration that incited scenes that wouldn’t be out of place in a zombie apocalypse movie, thrives on the power of social media. Today was no different.

Kanye West sat front row with his creative director and Off-White designer, Virgil Abloh, and Kris Jenner. Twitter was alight with pictures of Kendall and Gigi, who flipped hair colors, walking in the show. Rosie Huntington-Whiteley, Karlie Kloss, and Jourdan Dunn also made a trip down the runway. But Balmain designer Olivier Rousteing was just getting started. 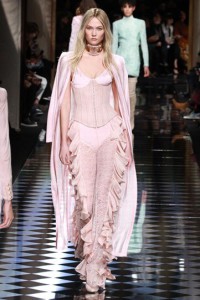 A live band (because people who insist they’re classy often are) played versions of David Bowie and Queen’s “Under Pressure” and Savage Garden’s “To the Moon and Back.” People have often criticized Rousteing for being excessive to the point of nauseousness and this live orchestra was a step further in his quest to always be doing the most.

Rousteing is a maximalist and he has always willingly added his aesthetics to current trends. Last season, as the ’70s swept the fashion industry, the designer played with suede and applied gold hardware and ruffles wherever he could.

This season was off to a more subdued and controlled approach with elegant patterned tops and slim-fitting silhouettes in pastel colors like blush and aqua blue. However, Rousteing’s control unraveled as he fell back on old habits. Ruffles and gold began to weigh down the collection and there was a parade of pieces embellished with pearls (similar to the sweatshirt Kanye’s sporting in slide 45), glitter, tassels, ruffles, and fur — sometimes all at once.

And heres the full video of the Show