Share on Facebook Share
Share
Share on Pinterest Share
Share
Share on Linkedin Share
Share
Share on Digg Share
Share
Since native Texan Daniel Roseberry’s arrival at the head of the house two years ago, Schiaparelli has carried on establishing itself on social media as one of the haute-couture brands to watch. In the wake of the Covid-19 pandemic, the brand decided to once again showcase its Spring-Summer 2021 collection digitally. The show, which took the form of a three minute long video and a series of portraits, undoubtedly benefited from the buzz surrounding President Joe Biden’s particularly emotional inauguration where the world watched lady Gaga sing the US national anthem wearing Schiaparelli from head to toe. She wore a black fitted jacket, a red silk faille ball skirt, and a golden dove brooch. This historical outfit set forth the equally original collection that the brand presented a few days later.  For a house like Schiaparelli,” Rossebery said, “dressing Gaga for the inauguration speaks to capturing the moment. That’s what I’m trying to do with all of our celebrity moments: to nail the zeitgeist.”

The American designer delivered on Monday a full collection entirely in keeping with his spellbinding Gaga gown. Instead of playing into the ceremonial character of haute-couture, he decided to zap it out altogether. The body is delineated without ever being constrained. The breastplates, bomber jacket, dangerously draped gowns, trompe-l’oeil statement jewels, corsets and leather trousers are made with strong materials but instead of compressing the silhouette, they protect it. The golden breast plate for instance looks like it is delicately painted on the model. The gilded toes moulded onto the shoes are also beautiful. Rosseberry’s taste for technical innovations aligns very well with the multiple nods to Schiaparelli’s signature symbols (the padlock, the hooded veil) he integrated into the SS21 garments.

The pink satin gown depicted below dangerously and humorously hangs from the large hoops the model is wearing. However, the risk-taking cut of the dress is more than just eccentric. The large metallic sea of fabric unfurling around the figure gives it a peculiar elegance, as if it was emerging from a surrealist world. If there’s one recurrent theme that deserves analysing, it is probably that of volumes. Roseberry is fascinated by the structure and the spaces that his designs occupy or let free. His dresses often expose the lower chest and oversized hats cover like bells the jackets which themselves overlay the skirts. 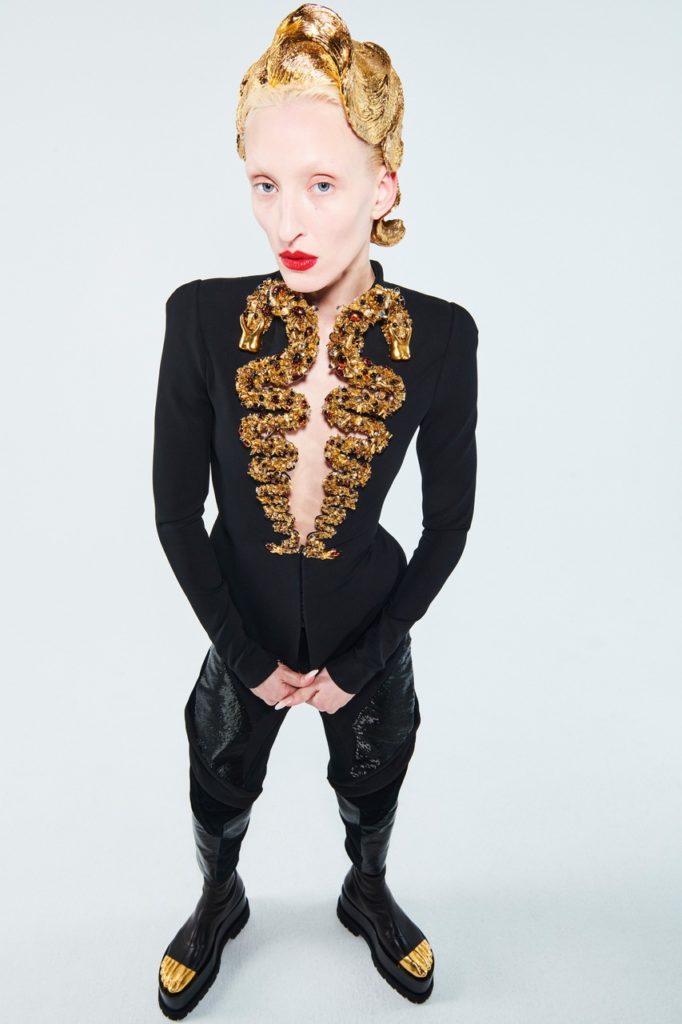 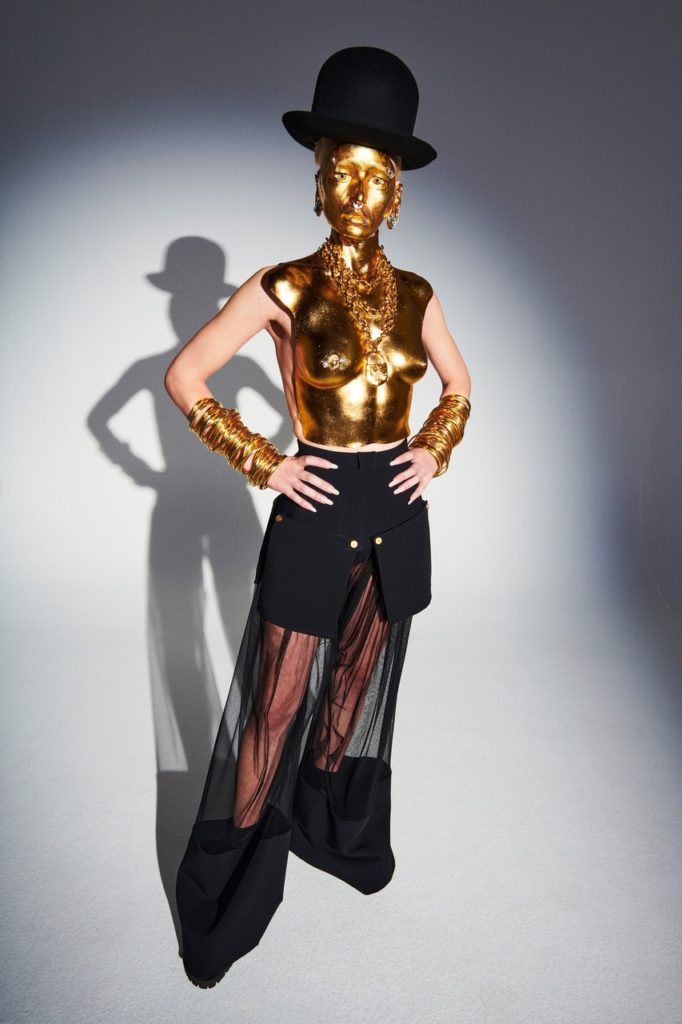 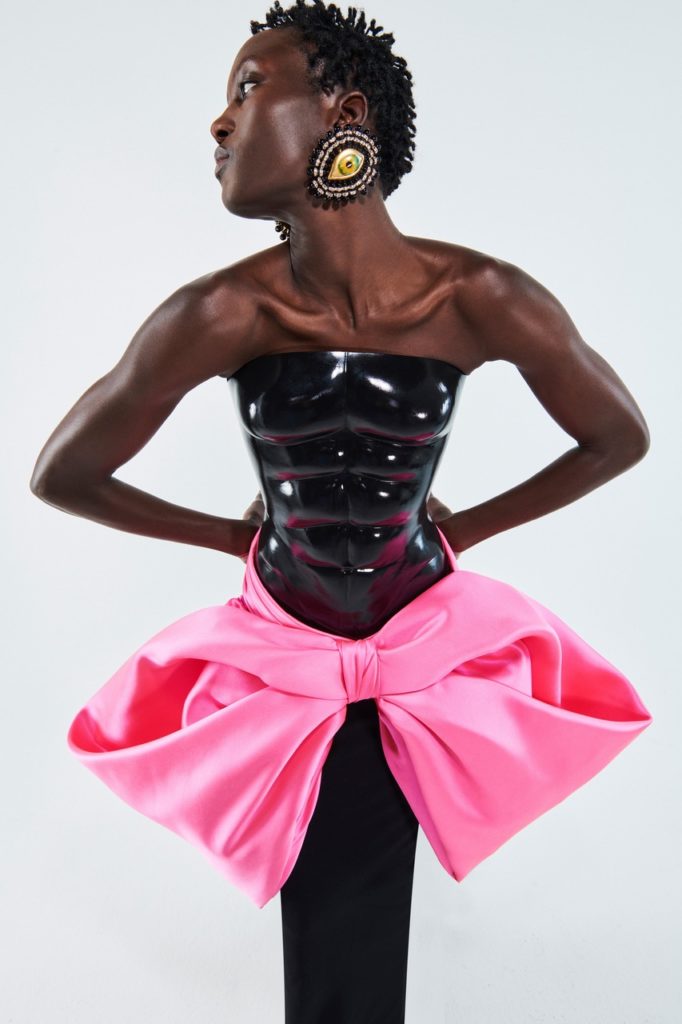 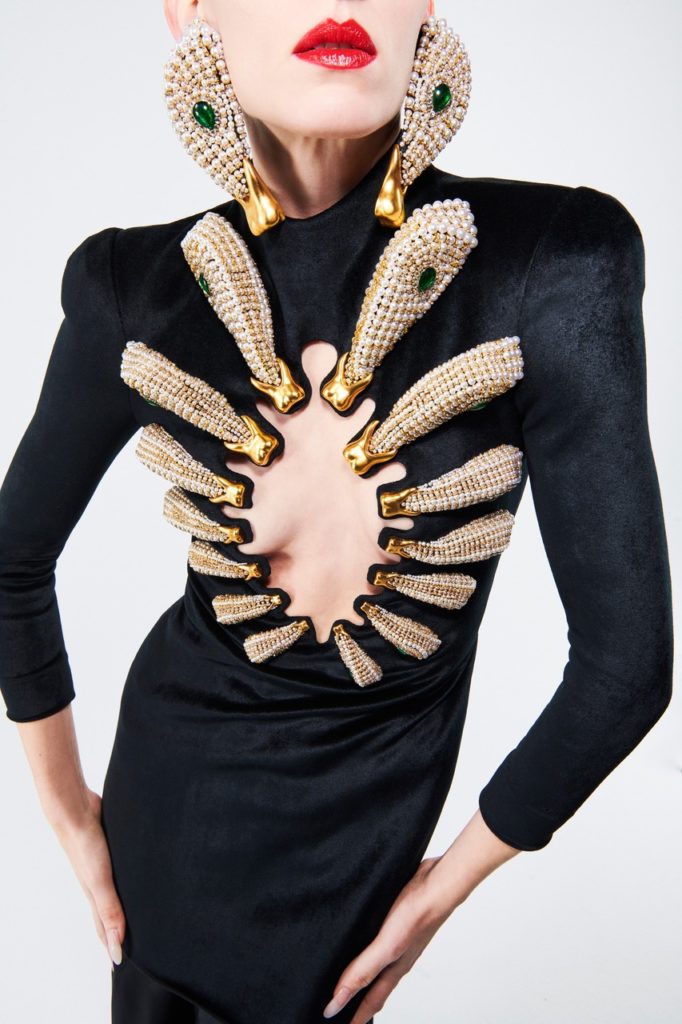 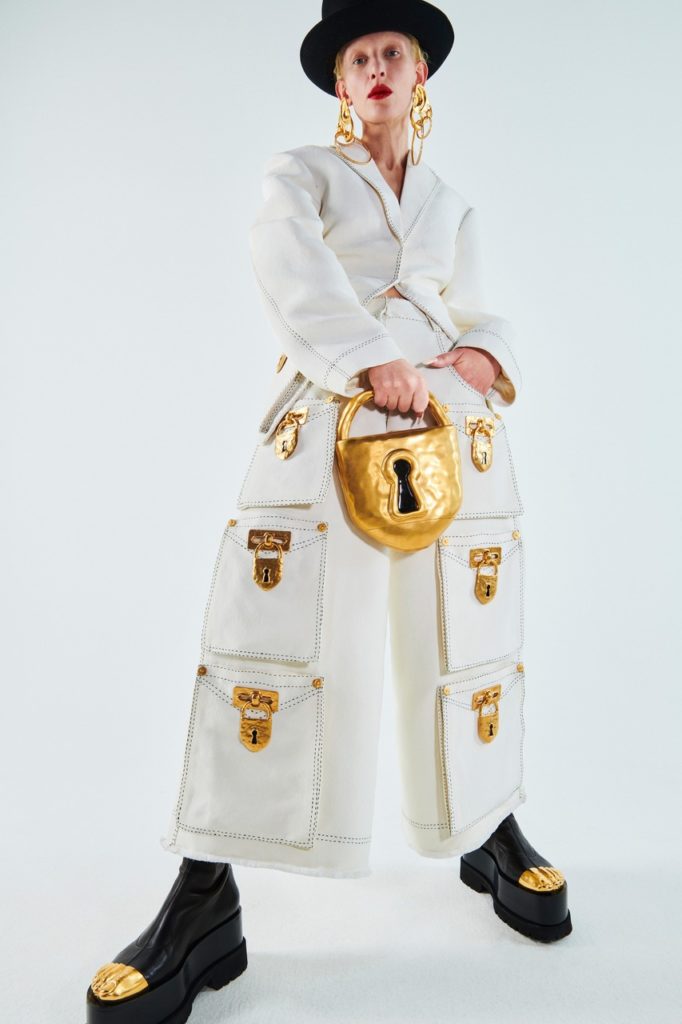 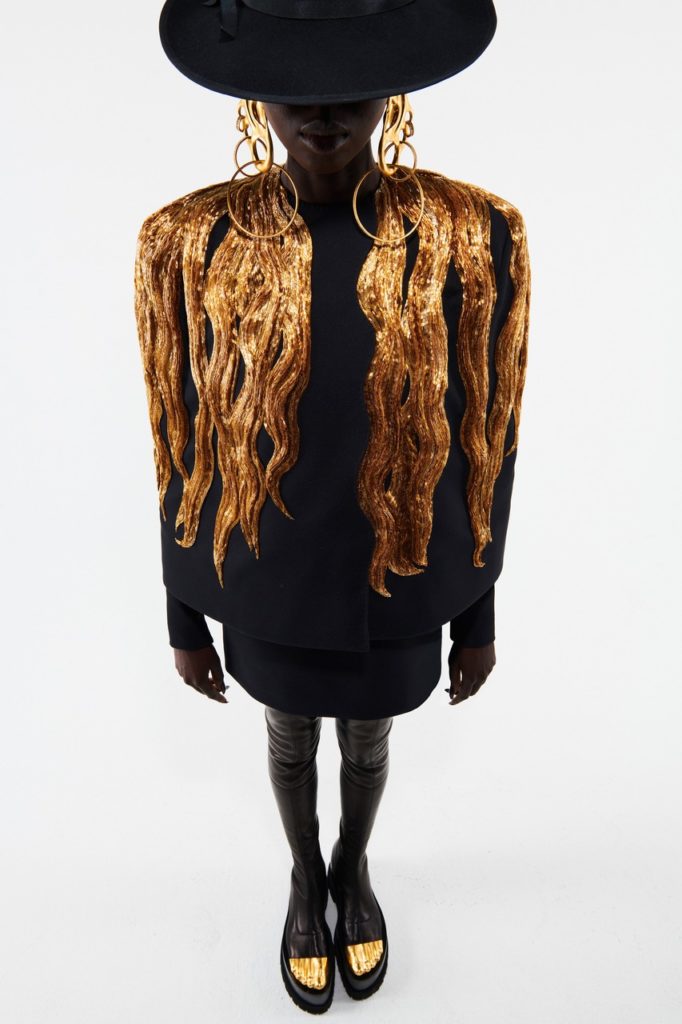 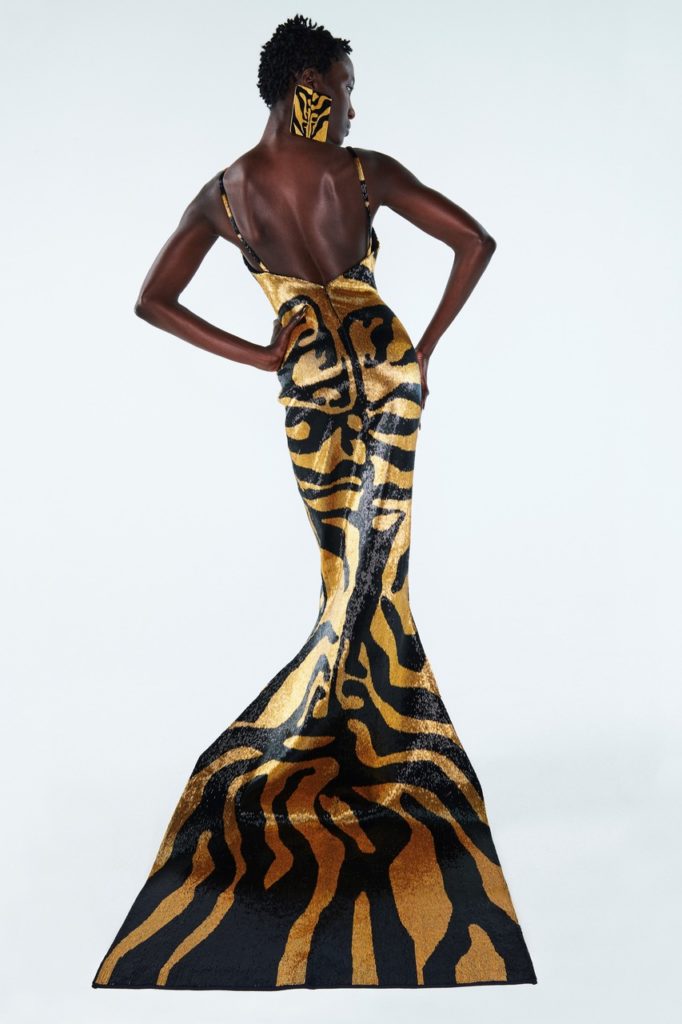 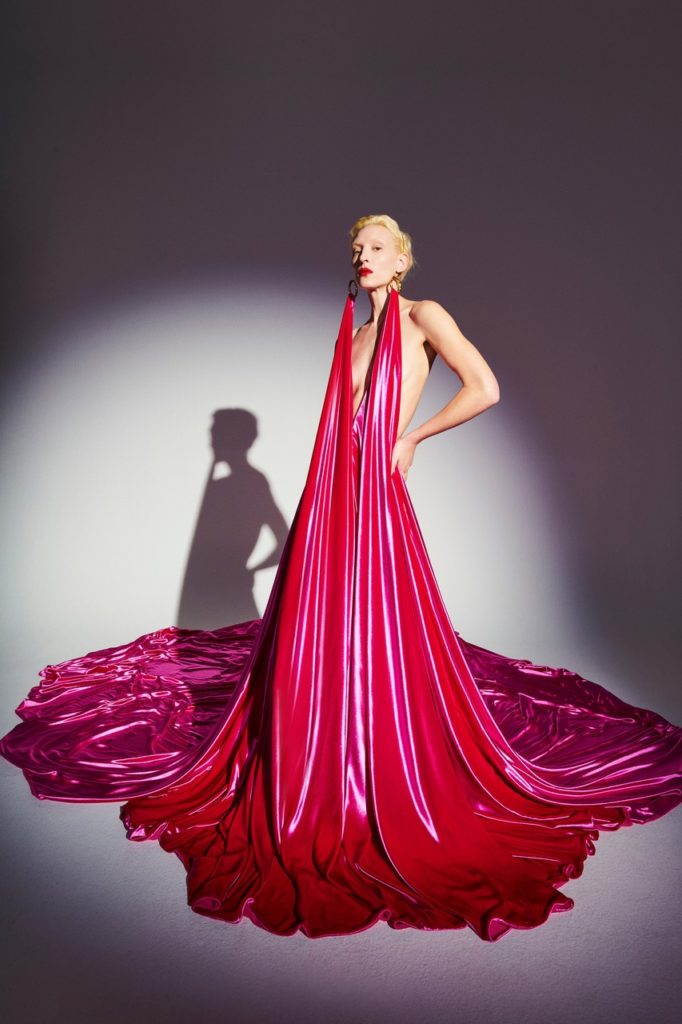