An Alien-Goth Invasion in Venice: Rick Owens Shows a Collection of Gargantuan Proportions with Loungewear (but not as you know it) as the Star of the Show.

To see the full collection https://www.rickowens.eu/en/IT/collections/women-gethsemane-fw21 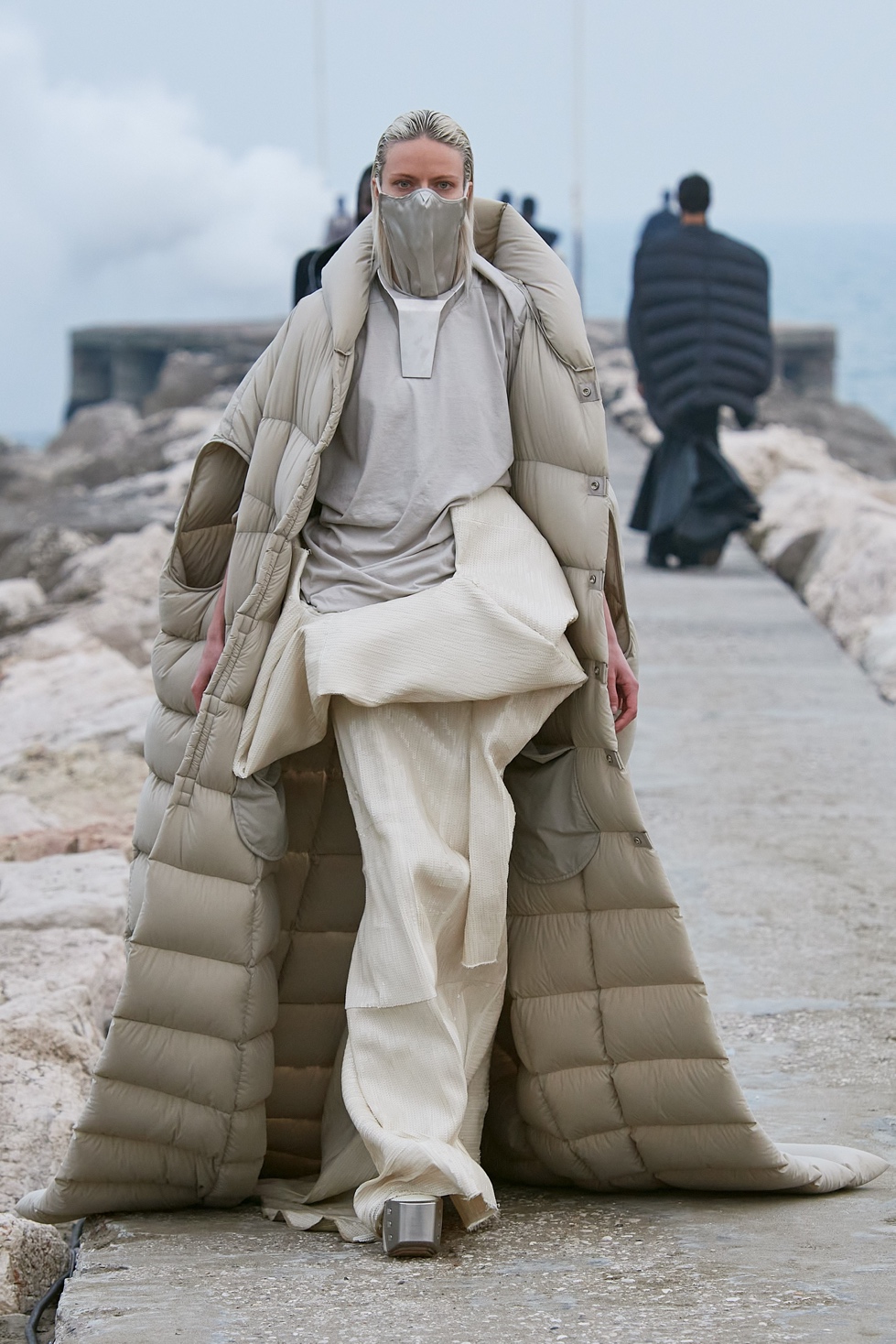 A floor-sweeping gilet over an asymmetrical skirt and cashmere top

The bad boy of fashion continued his Italian saga by filming his Fall/Winter womenswear 2020/21 collection rather conveniently at the beach across from where he lives, sans audience. He turned more than a few local eyebrows when parading his men in ‘Pentagon briefs’ in front of Venice’s revered war memorial at the Tempo Votivo on Venice’s Lido during his menswear show in January 2021. This time the Venice Lido with its pier (or is it a sewer?) housed Rick Owens’ models as they teetered on staggering platforms across the uneven ‘catwalk’ (oftentimes close to doing a Naomi Campbell in that super famous supermodel fall at a Vivienne Westwood show in 1993), into a bleak-looking, foggy Venice oceanscape, complete with atmospheric smoke billowing out at the end of the pier. 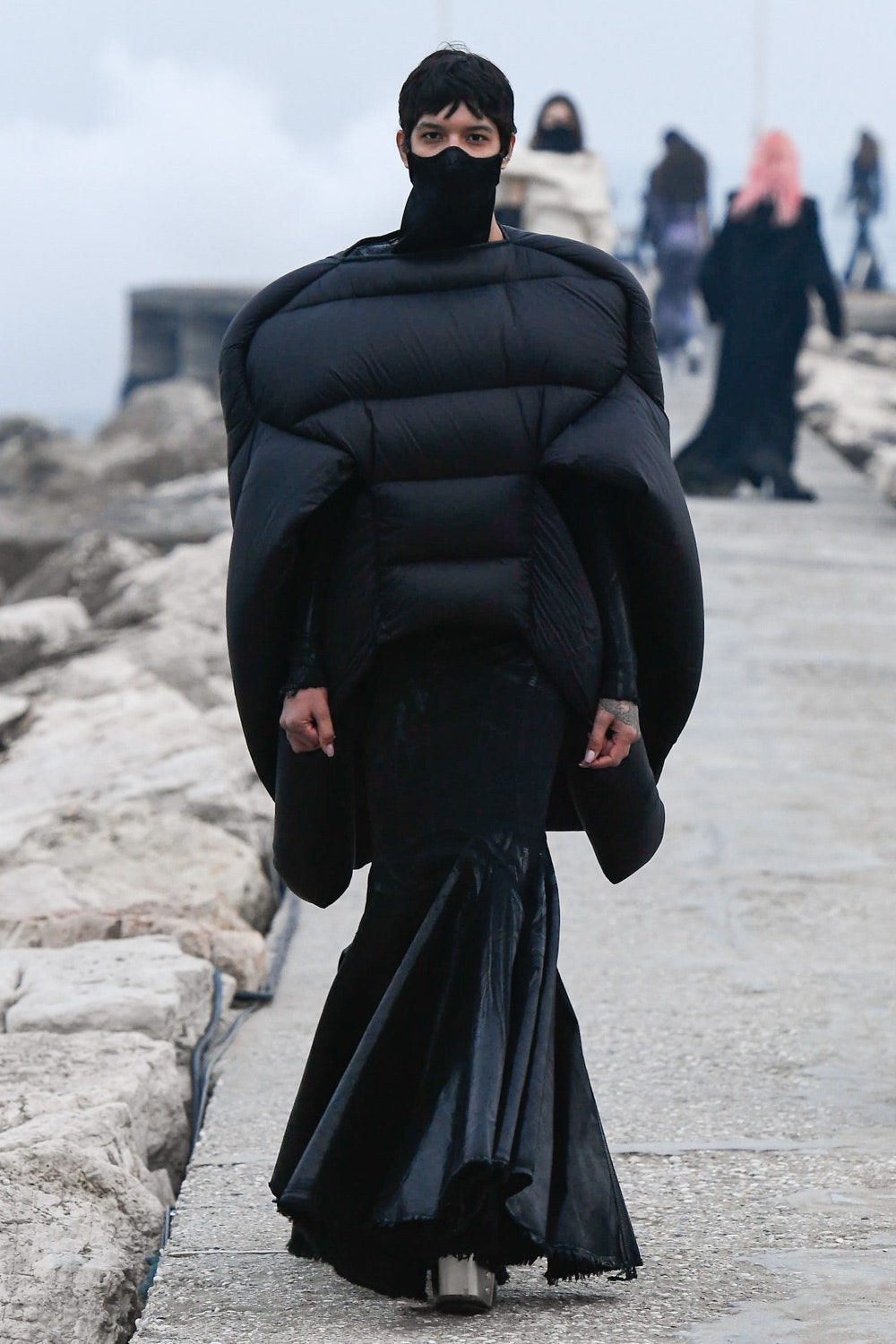 A power cape over a shapely fishtail dress 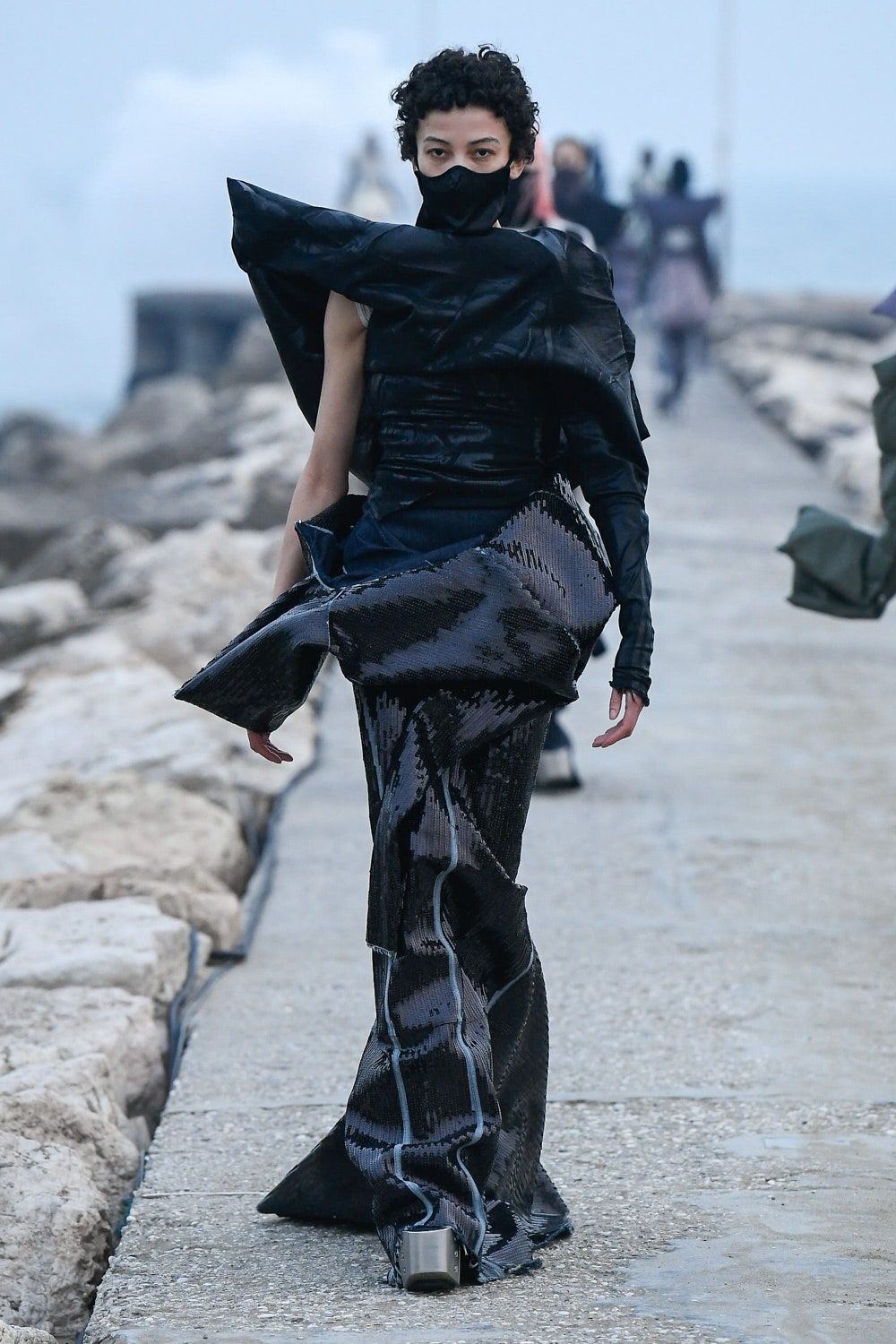 Since founding his eponymous label in 1994, Rick Owens has become synonymous with a certain kind of fearless fashion, that I struggle to label as ‘fashion’. Rick Owens does what he does in a very autobiographical, introspective and intellectual way and this just happens to translate into clothes that can only be described as epic, sculptural and even architectural in their design and construction. The silhouettes change fractionally from season to season (one can certainly not imagine Rick Owens ever succumbing to that cheap word ‘trends’) but the Rick handwriting is so strong that you’d never mistake a Rick Owens leather jacket or drop crotch trouser for anyone else’s – not back in 1994 or in 2021. 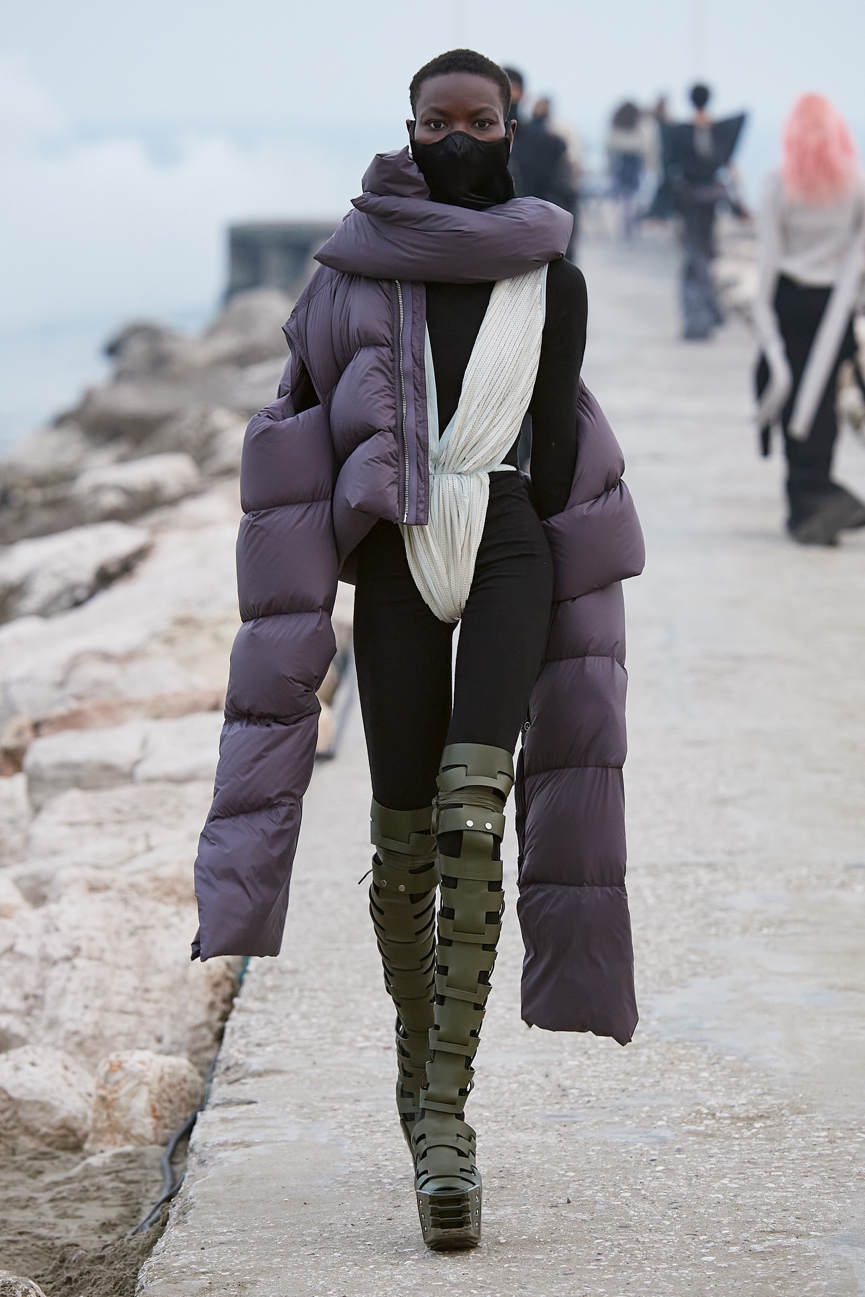 The puffer coat gets elongated sleeves – no gloves needed here! 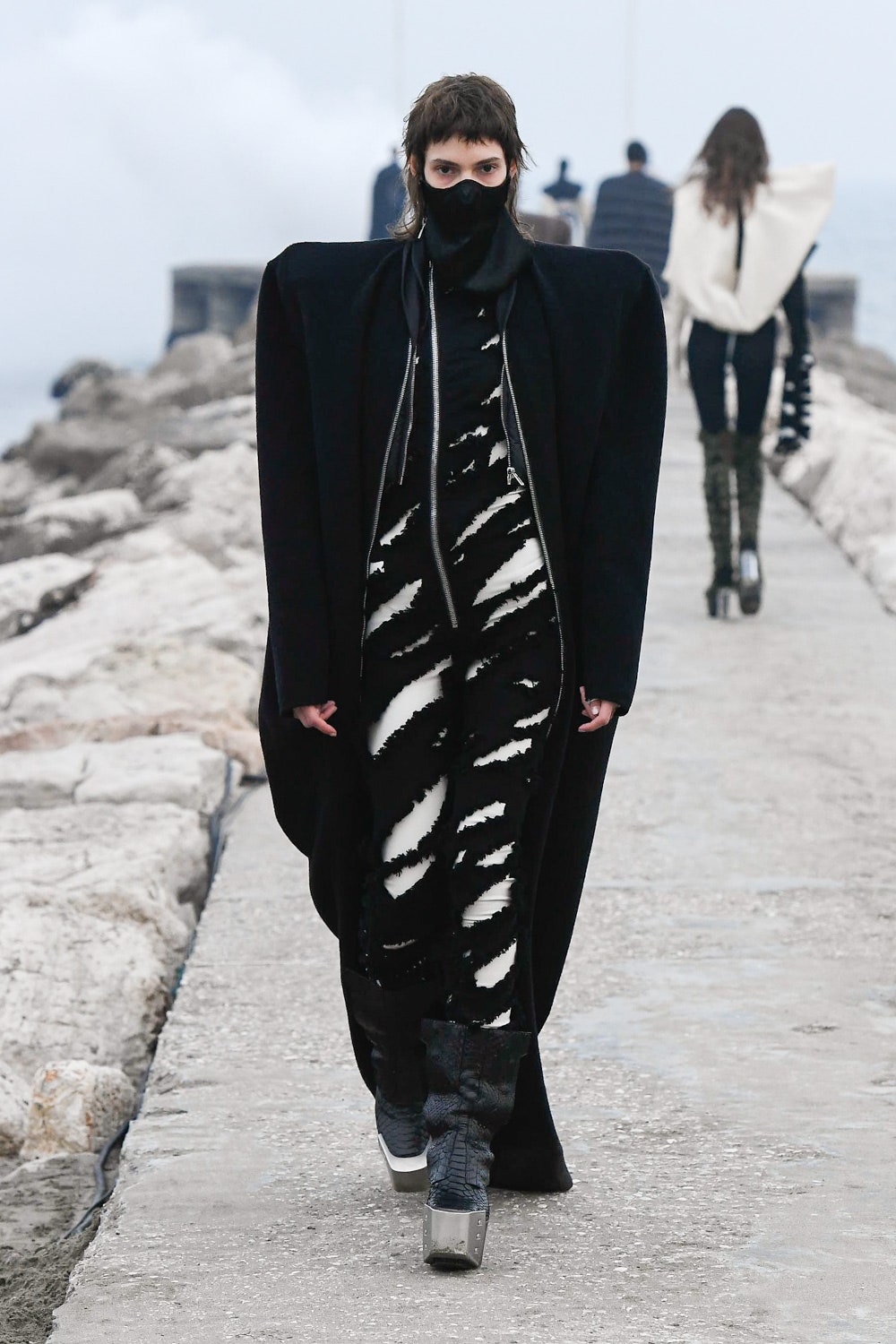 Can shoulders get any broader, Dracula? 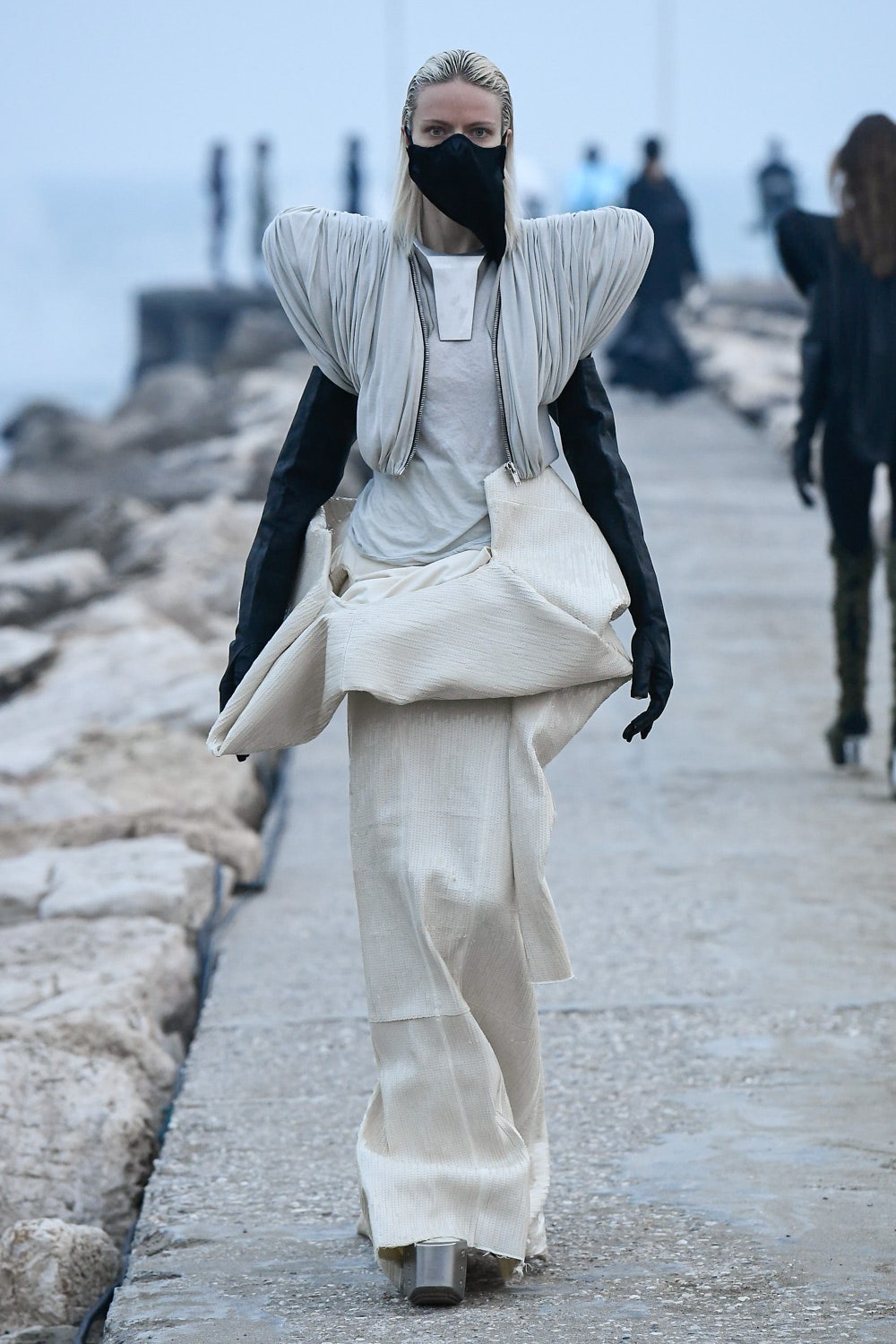 According to the gospel of Rick Owens, and I quote, ’when things are difficult, you have to step it up and you have to give vitality and energy and power’, which is exactly what transpired in this womenswear collection of cinematic proportions. Watching these almost off-the-scale dystopian silhouettes make their way down the pier it’s hard not to let Mad Max, Star Wars and Jules Verne’s Twenty Thousand Leagues Under The Sea spring to mind. 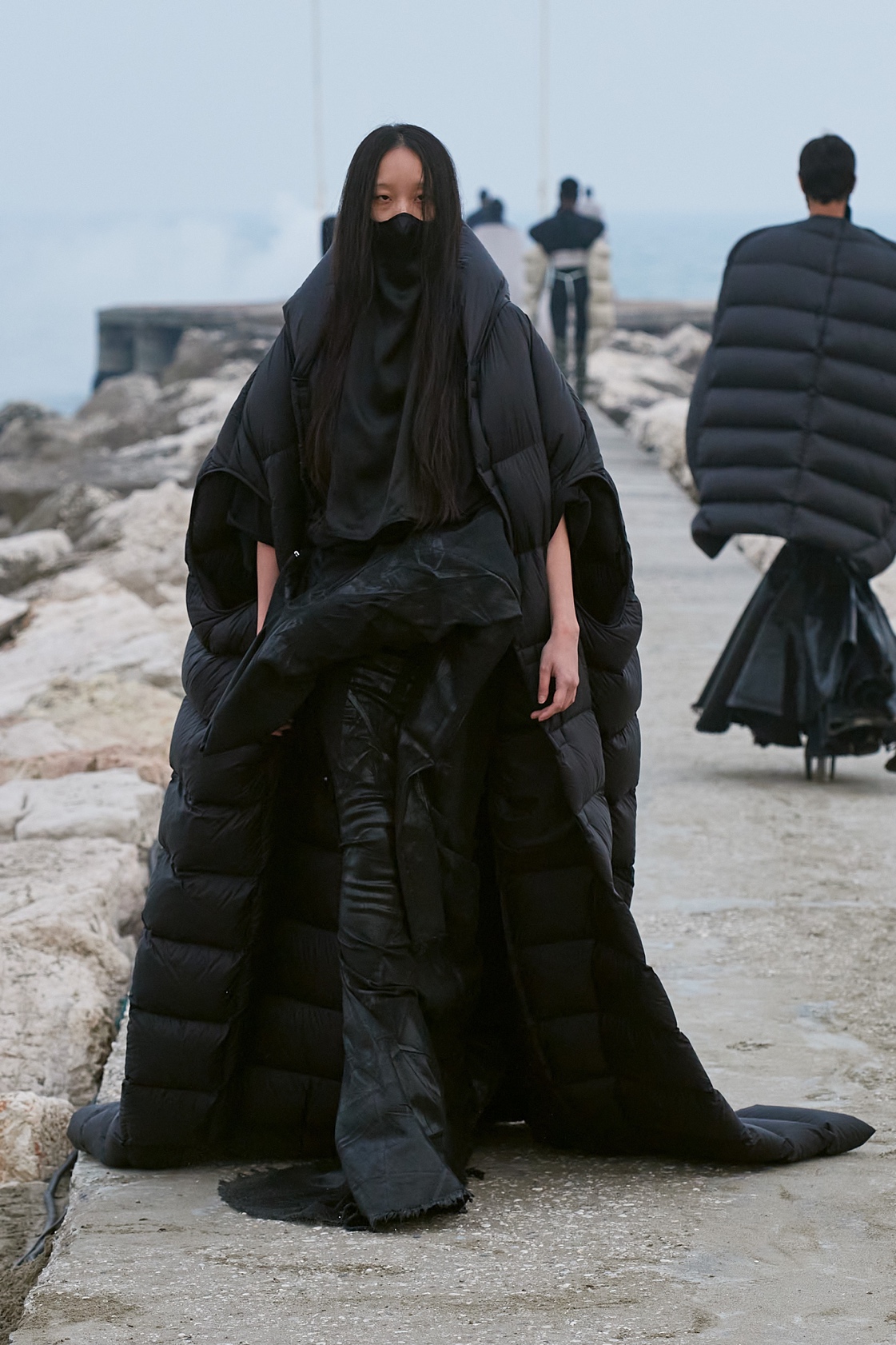 A floor-sweeping puffer gilet over a fishtail silhouette 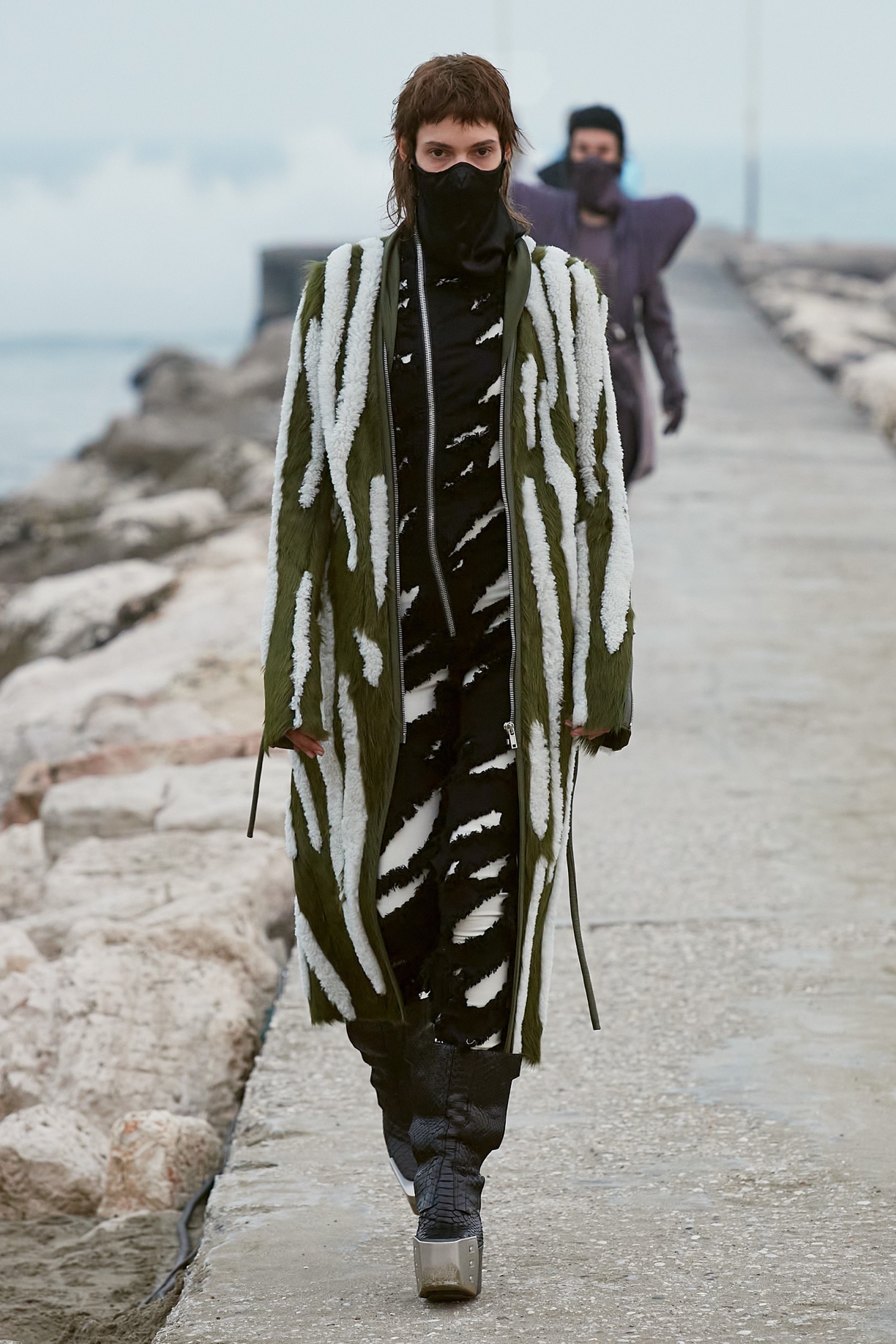 A ripped denim bodysuit worn underneath a camouflage coat 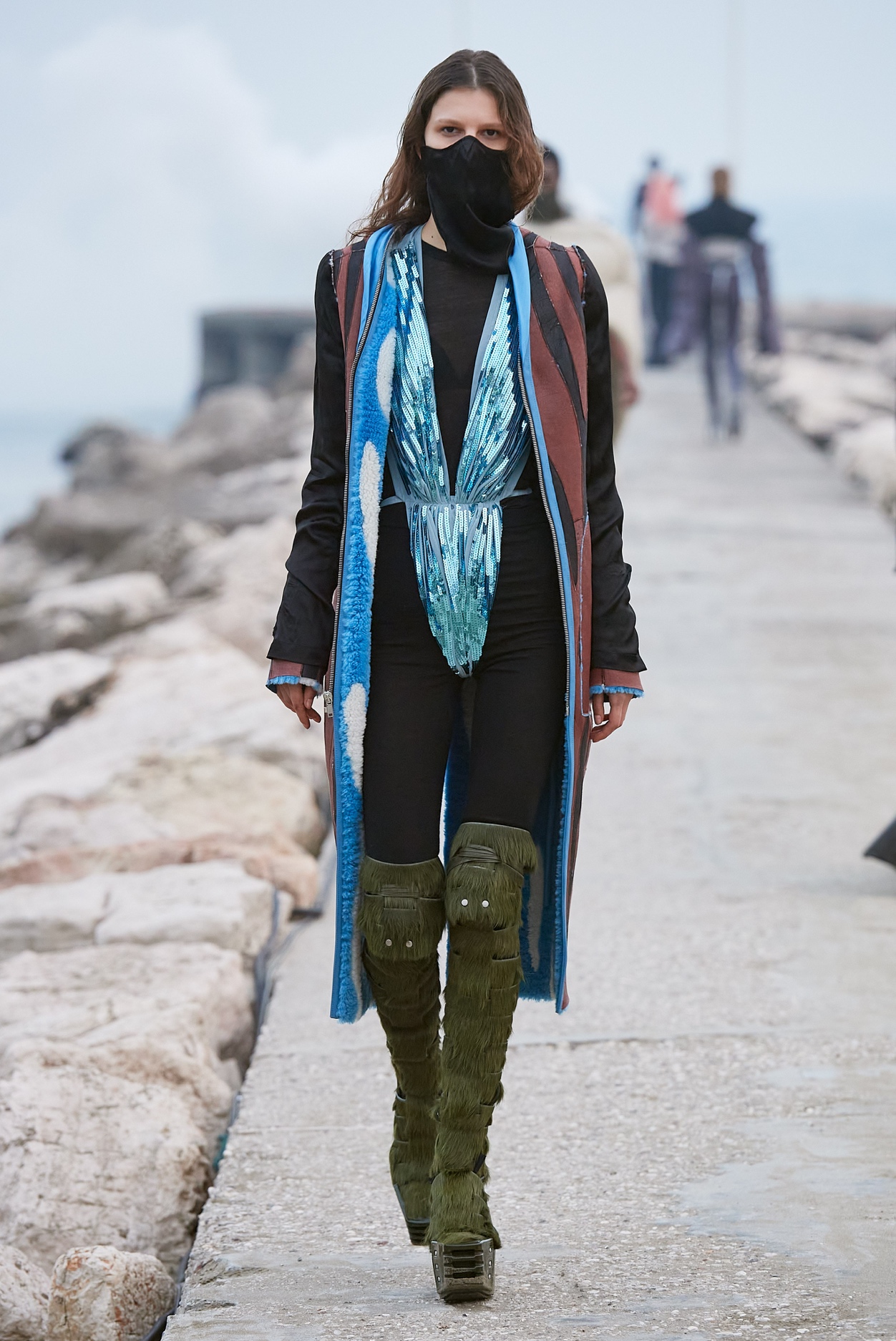 A touch of mermaid in this sequined body

After a year’s worth of lockdowns and social restrictions (together with other noteworthy world events we won’t go into here) Rick Owens went all out and translated loungewear into body armour: mega-mega shoulders, haute couture-style puffer jackets, sweeping capes, glittery sequin cat suits, hourglass fishtail dresses, luxurious cashmere bodysuits worn close to the skin and power platforms. Now I am by no means suggesting this is comfortwear for your average Joe … 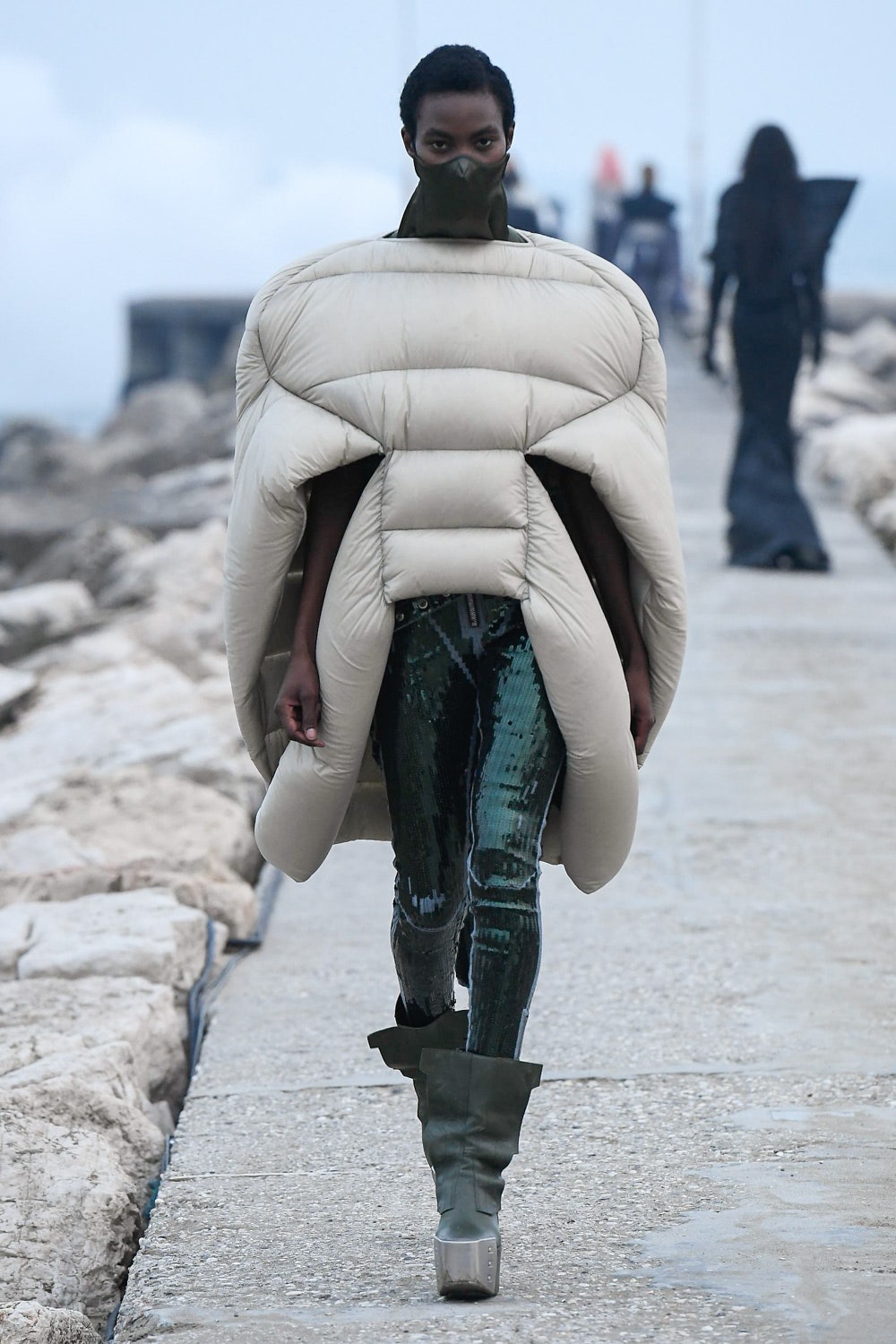 A puffer cape of epic proportions 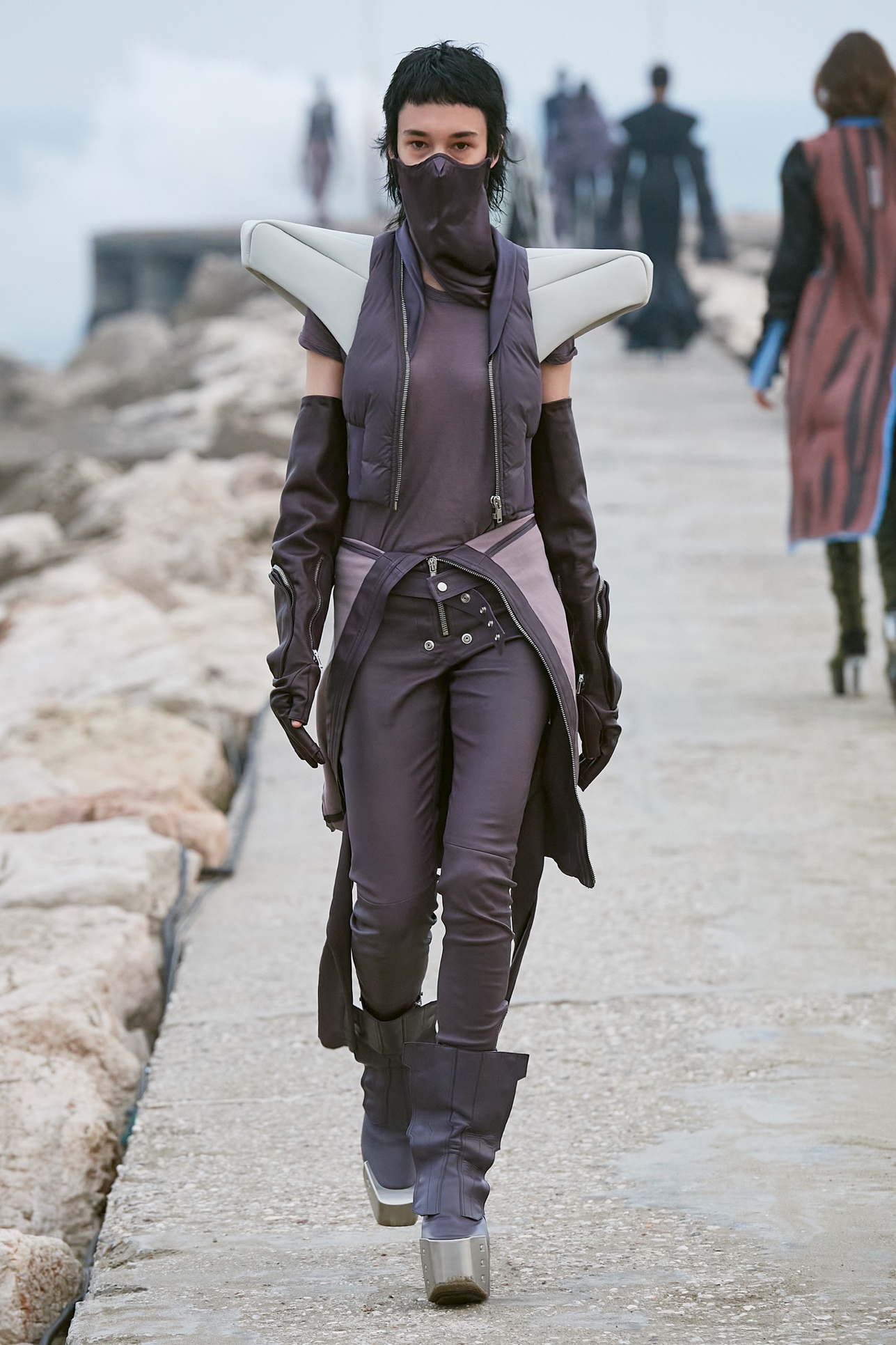 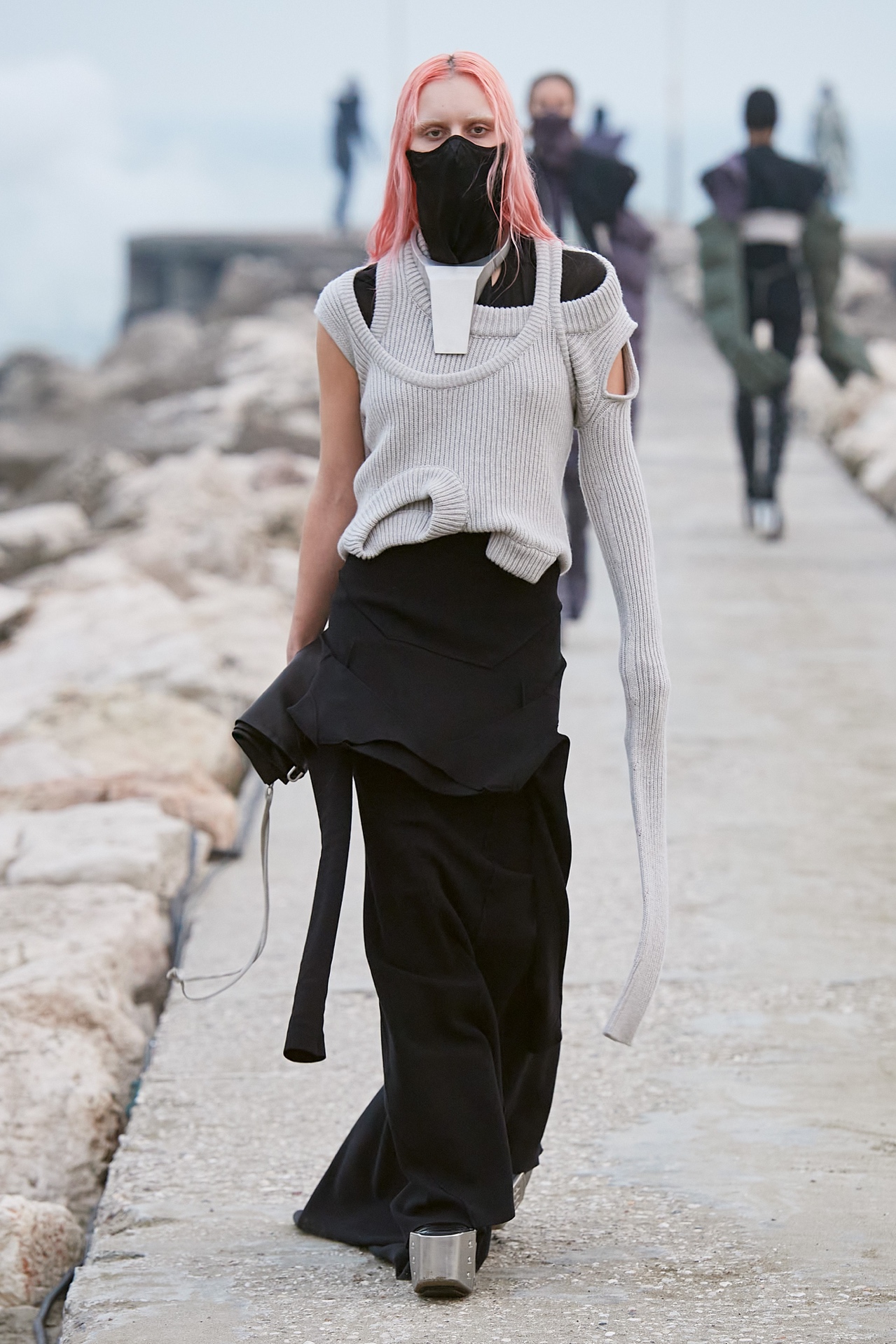 A postmodern take on cashmere layering 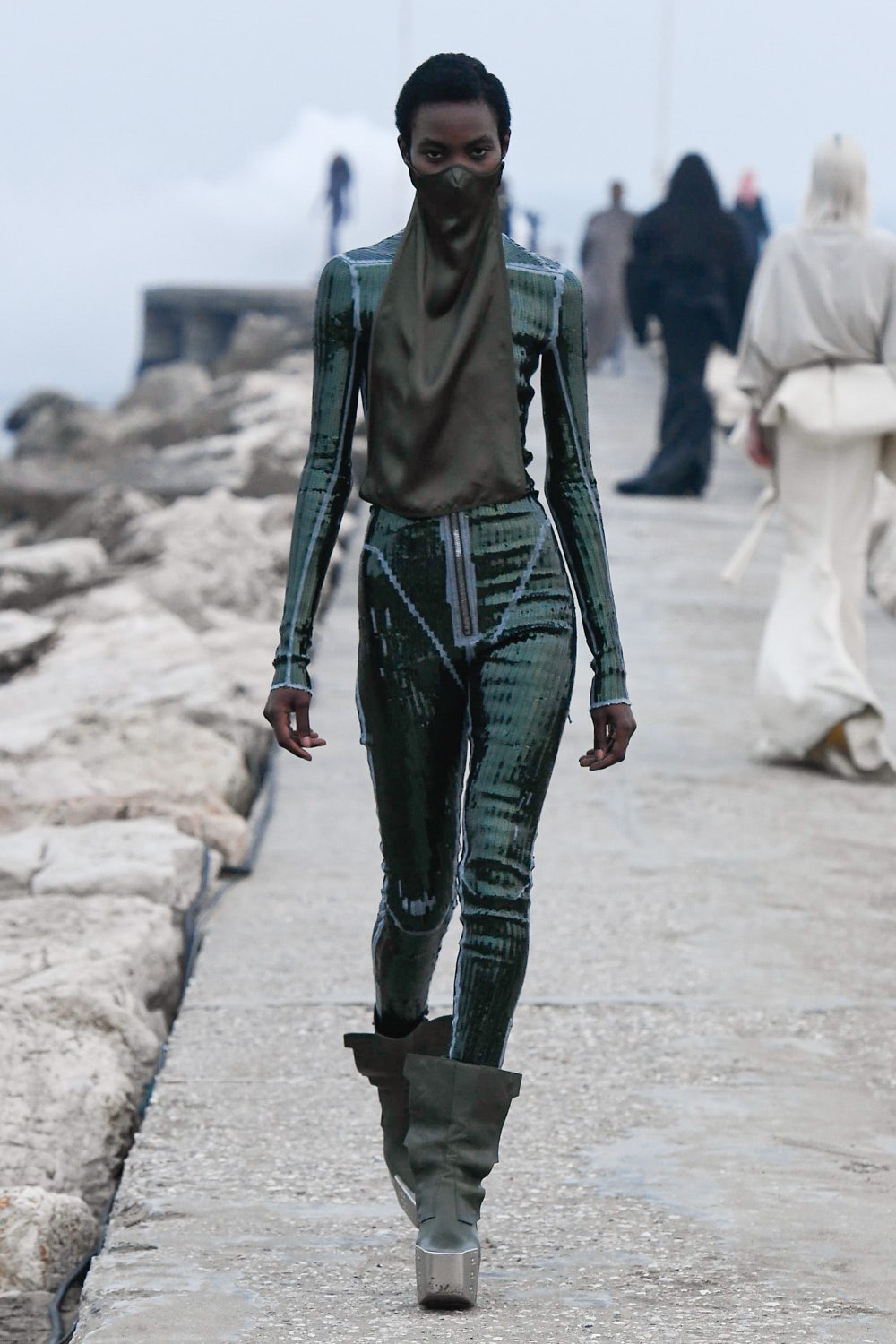 ‘I rarely talk about aggression or violence when I’m doing a women’s show, because all of my shows are kind of autobiographical and an examination of my own psyche. And, I have moments of aggression that still surprise me and horrify me. But on the other hand, I think I sometimes need that aggression to propel me forward. With women, it’s not autobiographical, so it’s more about my admiration. The funny thing is, though, Michele [Lamy] had told me in the past that sometimes my women get a little too stately, and that they’re not fuckable enough. So, I try to listen to her.’

Whatever keeps your creative juices flowing, Rick! The fact of the matter is that Rick Owens lovers all over the world are more than happy for you to keep admiring us women, if that’s the thing that lets you dream up these otherworldly creations for us.