PDC – This Week In The PDC 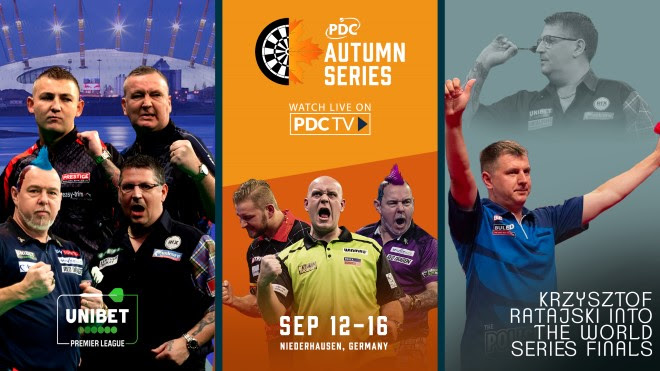 PDC Darts came back with a bang last week as the Unibet Premier League returned behind closed doors in Milton Keynes. Nine players started the journey way back in Februrary and now just four remain, who will be heading to The O2, London to compete in the Play-Offs on October 22.

Saturday saw the 16th and final night of league phase action take place, with five players vying for the final three qualifying places… find out how the final night unfolded by clicking the link below.

The action doesn’t stop as elite level darts returns this Saturday with the PDC Autumn Series arrives in Niederhausen, Germany from September 12-16. 128 The Autumn Series will see PDC Tour Card Holders will once again be going toe-to-toe on the oche, competing in five one-day Players Championship events across five days.

The PDC Autumn Series will be broadcast live on PDCTV to all registered Annual and Monthly Subscribers, so please ensure you have a valid subscription before Friday September 11.

Poland’s Krzysztof Ratajski has come into the field for next week’s World Series of Darts Finals in Salzburg following Gary Anderson’s withdrawal.

The 24-player field for the event will be headlined by reigning champion Michael van Gerwen and World Champion Peter Wright, with coverage on ITV4, as well as through the PDC’s international broadcast partners including RTL7 and DAZN and for PDCTV Rest of the World Subscribers.