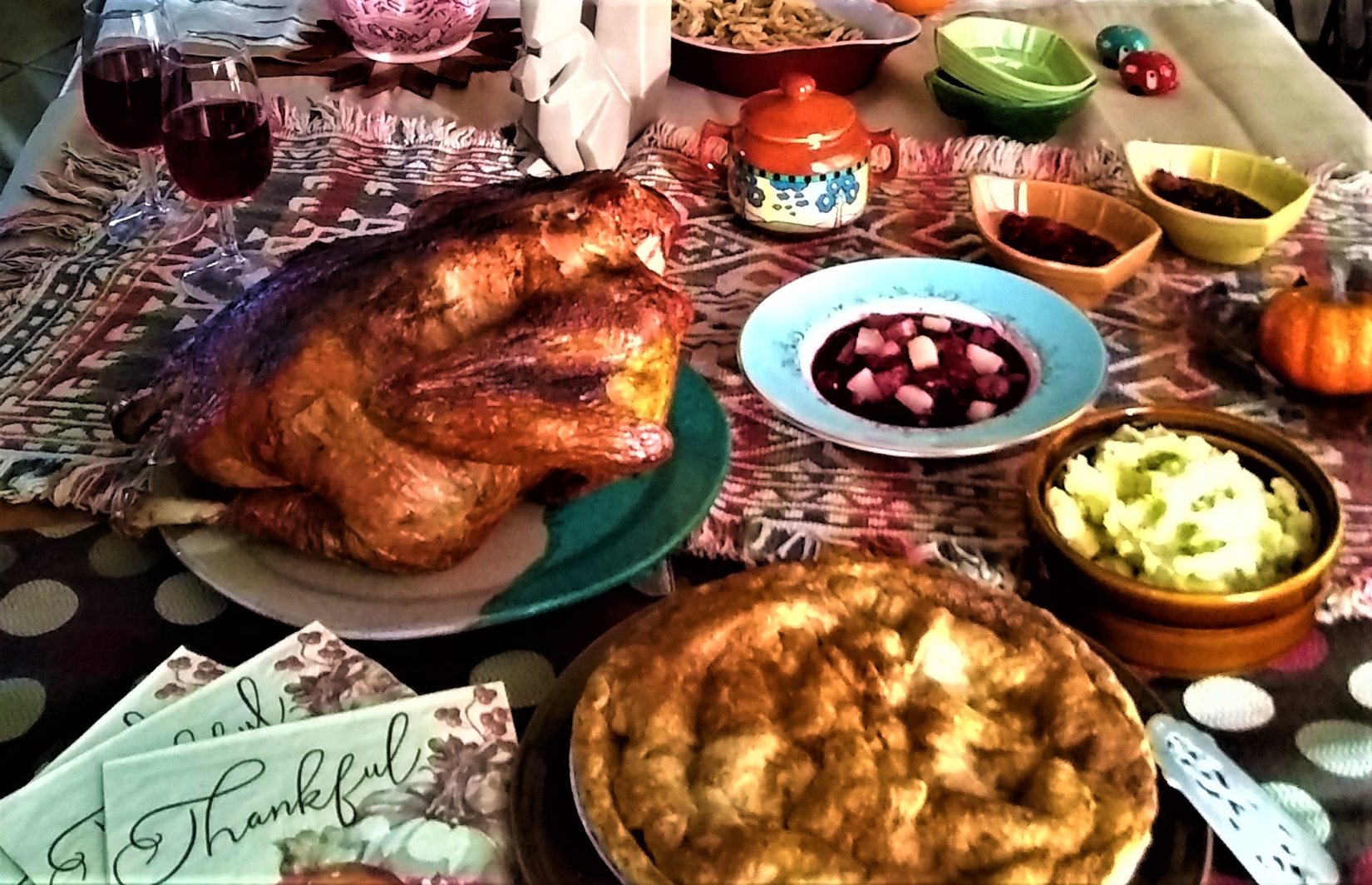 What does Thanksgiving mean to you? To so many people it means enjoying a nostalgic dinner surrounded by their families. The turkey is usually the star attraction of the feast. Many people cook a traditional meal, one that doesn’t deviate from one year to the next. But in New York, we like to add the celebration of diversity into our cooking and spices to pay tribute to the many ethnic groups and cultures that make up the United States. 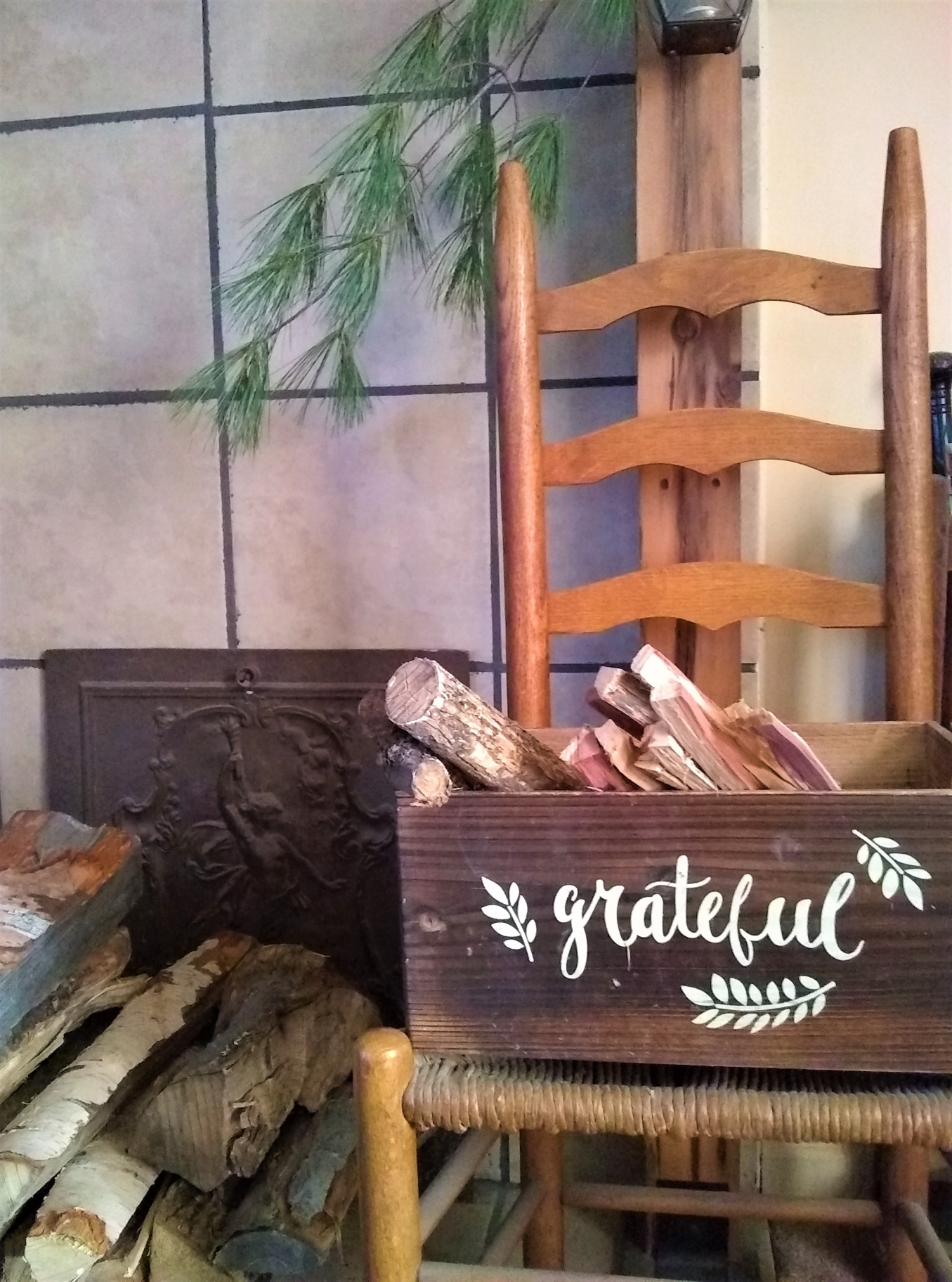 Welcome to our Thanksgiving. We like to spend some time thinking about what we are grateful for. In this year of 2020, that was so difficult for every one of us, it’s important to focus on who we are, who we love, how we can go forward toward a brighter future for each other and for the planet that we share. 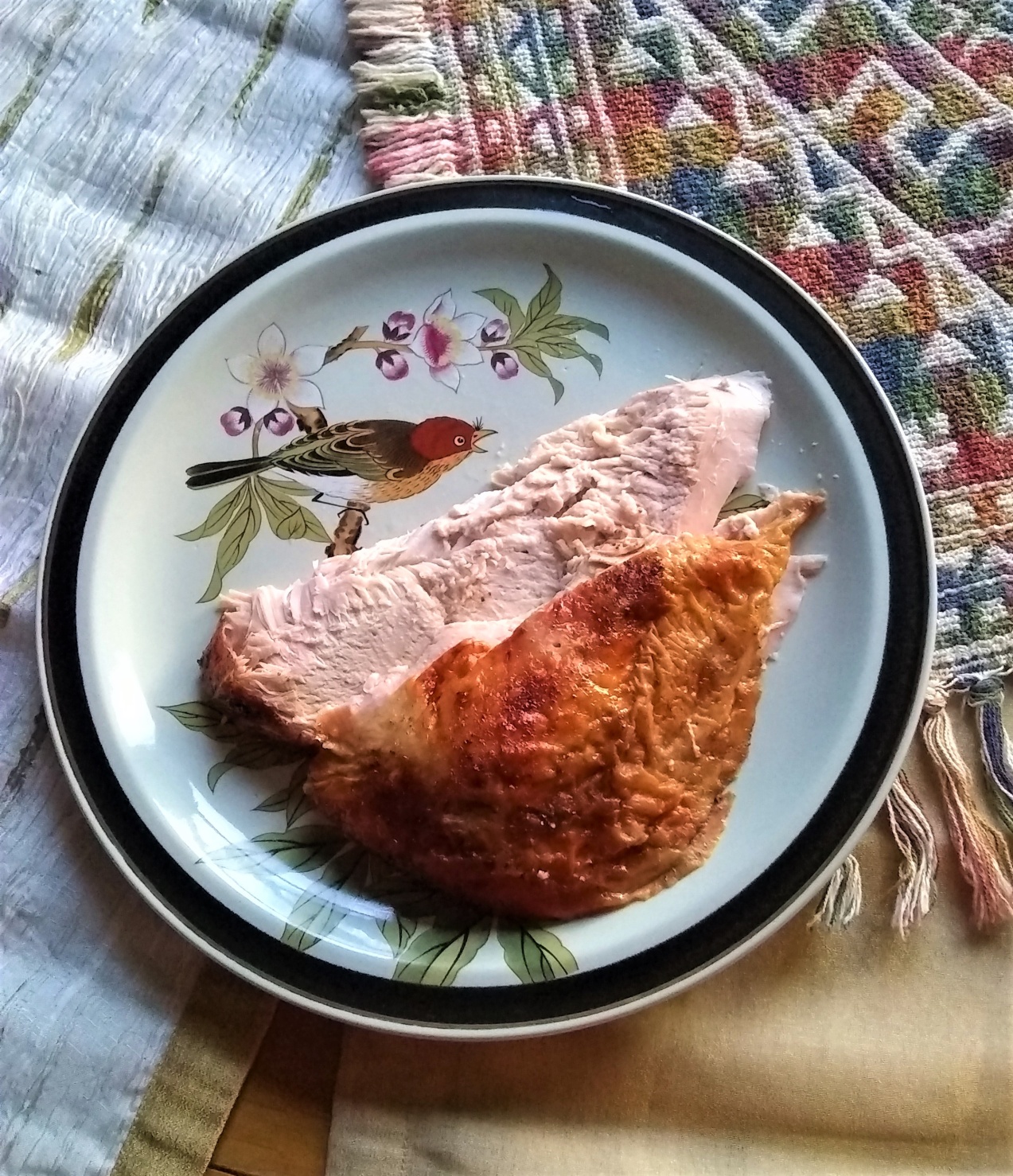 Starting, where else? The turkey. Everyone gets second helpings. How do we make it? Simple. Rub with butter, sprinkle with onion, garlic and sage, squeeze the juice of an orange all over. Thanksgiving is the holiday where we pull out all those wonderful dishes and plates that we love but only use for special occasions. 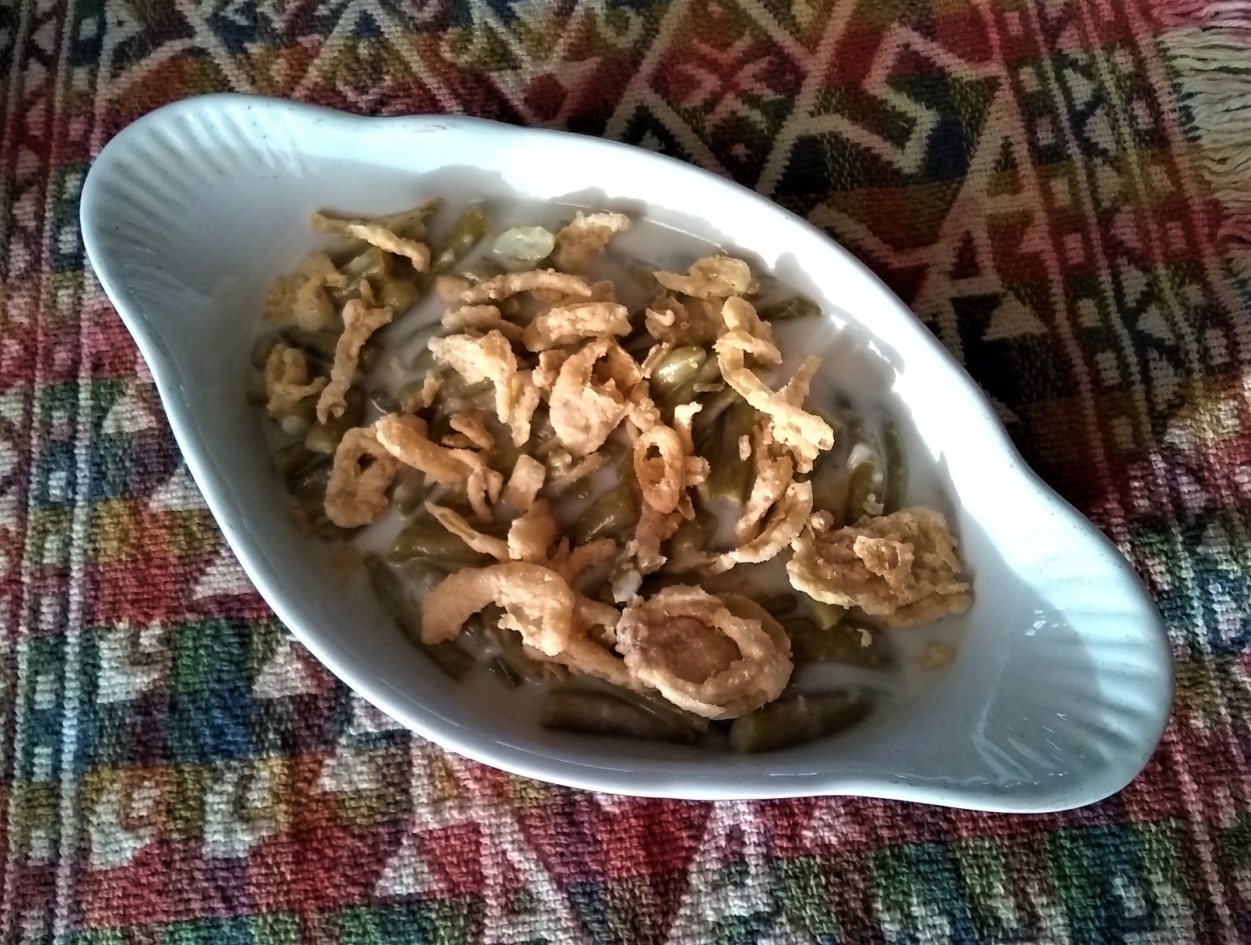 The traditional favorite green bean casserole, invented by Campbell test kitchen manager Dorcas Reilly in 1955. This is probably the only day of the year that most of us eat French’s fried onion rings. Campbell’s estimated that in 2018 it was served in 20 million households.

Let’s mix in the story of Thanksgiving with our good ol’ home cooking!

The traditional Thanksgiving story goes something like this: In September, 1620, 100 Pilgrims sailed from Plymouth, England in a ship called the Mayflower to find a better way of life. The dangerous journey lasted 66 days. After first arriving at Cape Cod, they sailed to an area better suited to grow crops and settled in Patuxet, the Wampanoag Native American name for the area where they established Plymouth Colony in Massachusetts. Massasoit, leader of the Wampanoag provided food to the colonists so they wouldn’t starve during their first winter. 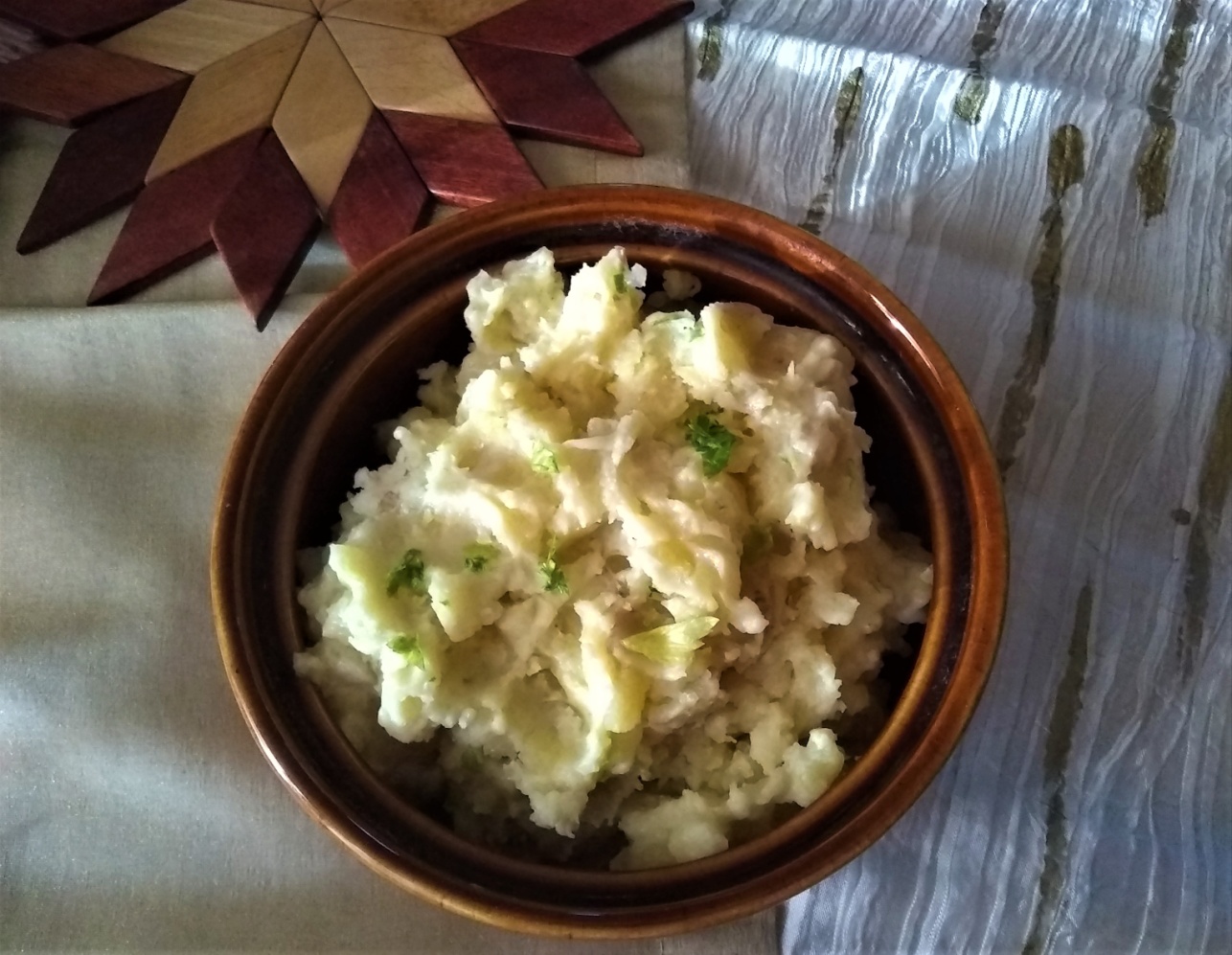 In honor of my Irish friends, I invented this tricked out Colcannon, New York style. We start out the same way, with a nice big helping of smashed potatoes and a dollop of butter, but instead of milk we add mayonnaise and to substitute kale or cabbage, we use Italian pesto! Sounds wild, right? Give it a try. Start with ½ tablespoon of pesto and bump it up if you like the results. Tell me what you think. 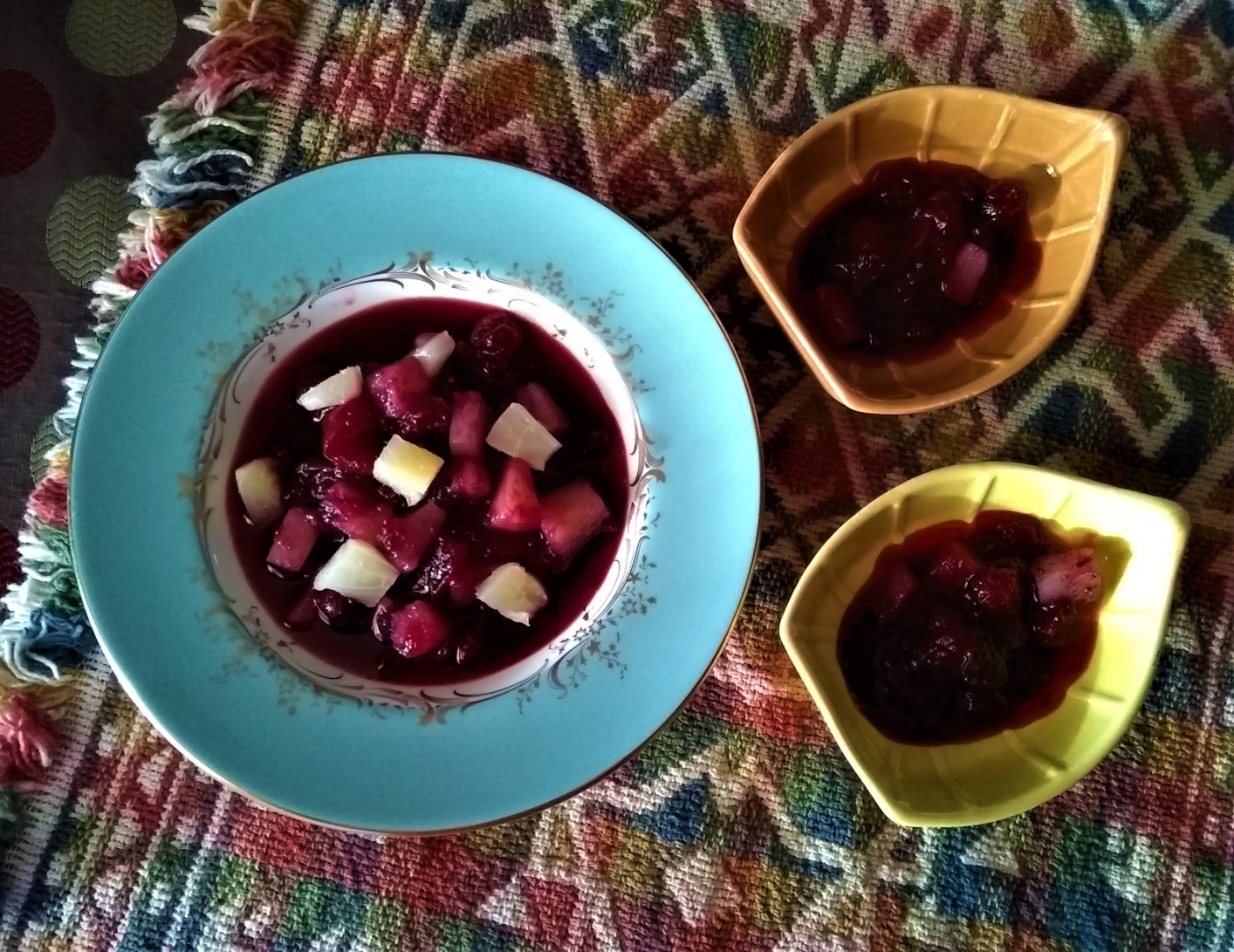 In 1621, in the spring, Squanto, a member of the Patuxet tribe, taught the Pilgrims who were weakened by malnutrition and illness how to cultivate corn, extract sap from maple trees, catch fish and avoid poisonous plants. He also helped the settlers forge an alliance with the Wampanoag tribe. For the Wampanoag perspective of Thanksgiving, click here. 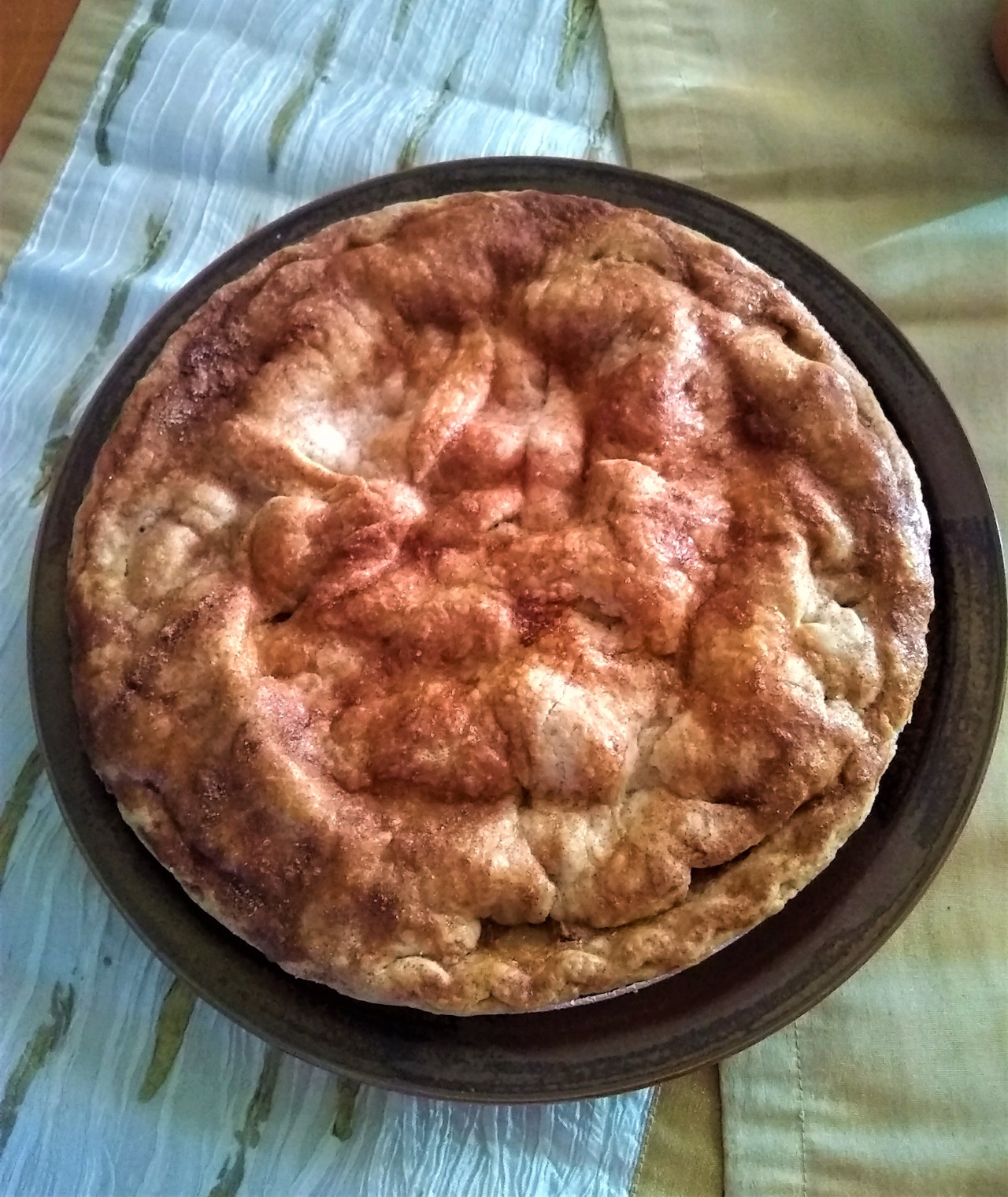 Although the Pilgrims didn’t have any pies or cakes for their first Thanksgiving, (Harvest Festival), as they had run out of sugar, we always do. Homey apple pie, with, yes, I admit it, store bought pie shell. Perfectly acceptable when you’re on a tight deadline; aka this article. This pie was still a big crowd pleaser. (My husband loves it.)

What we call Thanksgiving today was actually a three day festival for the first successful harvest. Who celebrated this first “Thanksgiving?” 50 Pilgrims who remained of the 100 who had landed in 1620 and 90 Native Americans of the Wampanoag tribe. The feast was cooked by the four adult Pilgrim women who survived their first winter in the New World: Eleanor Billington, Elizabeth Hopkins, Mary Brewster and Susanna White. Can you imagine four women cooking for three days for 140 people? Lobster, swans and seals were probably on the menu and the Wampanoag donated five deer for the feast. Games, competitions and entertainments were also part of the first Thanksgiving festival. 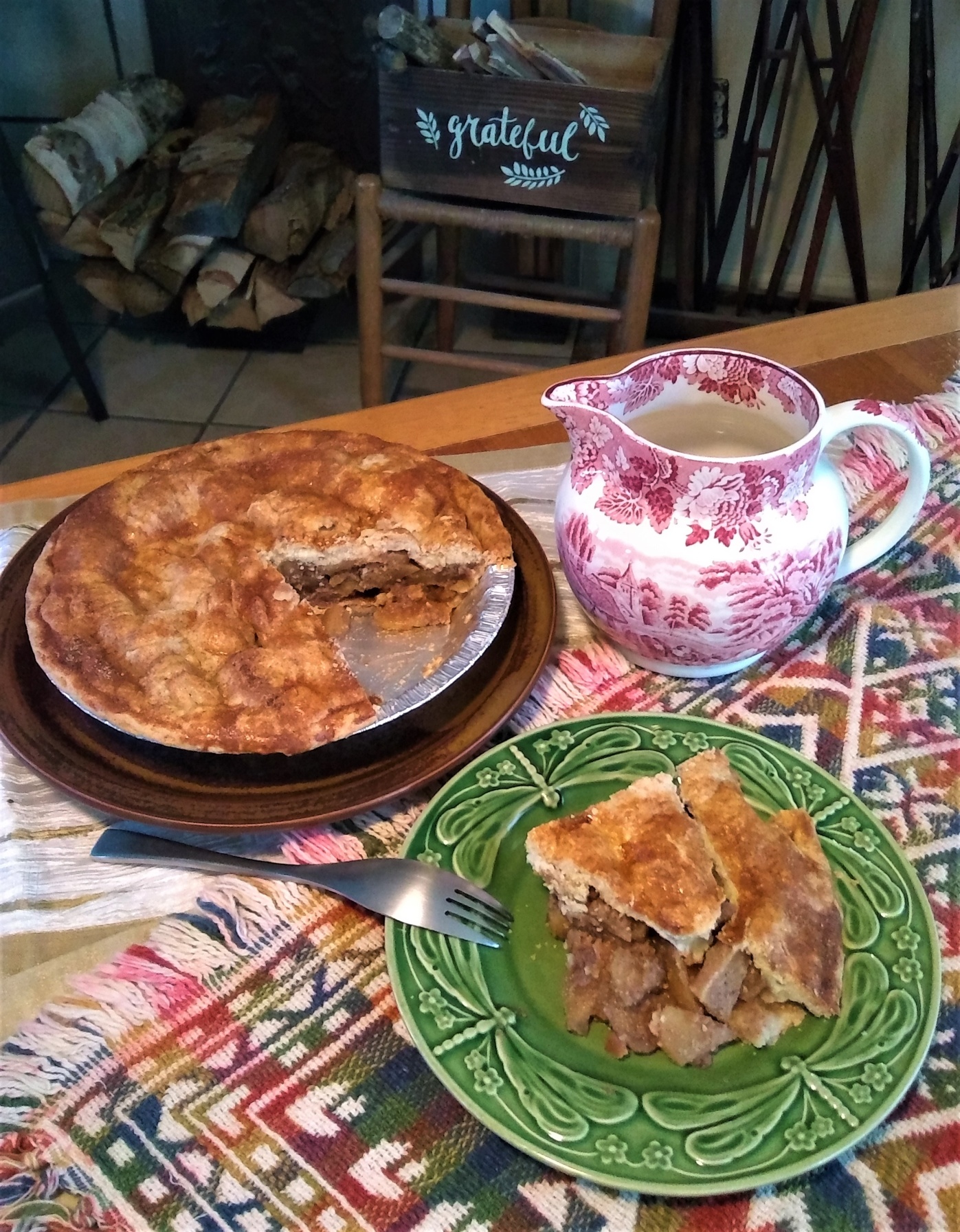 Apple pie on a vintage dragonfly plate. The extra tablespoon of cinnamon colors the apples brown. 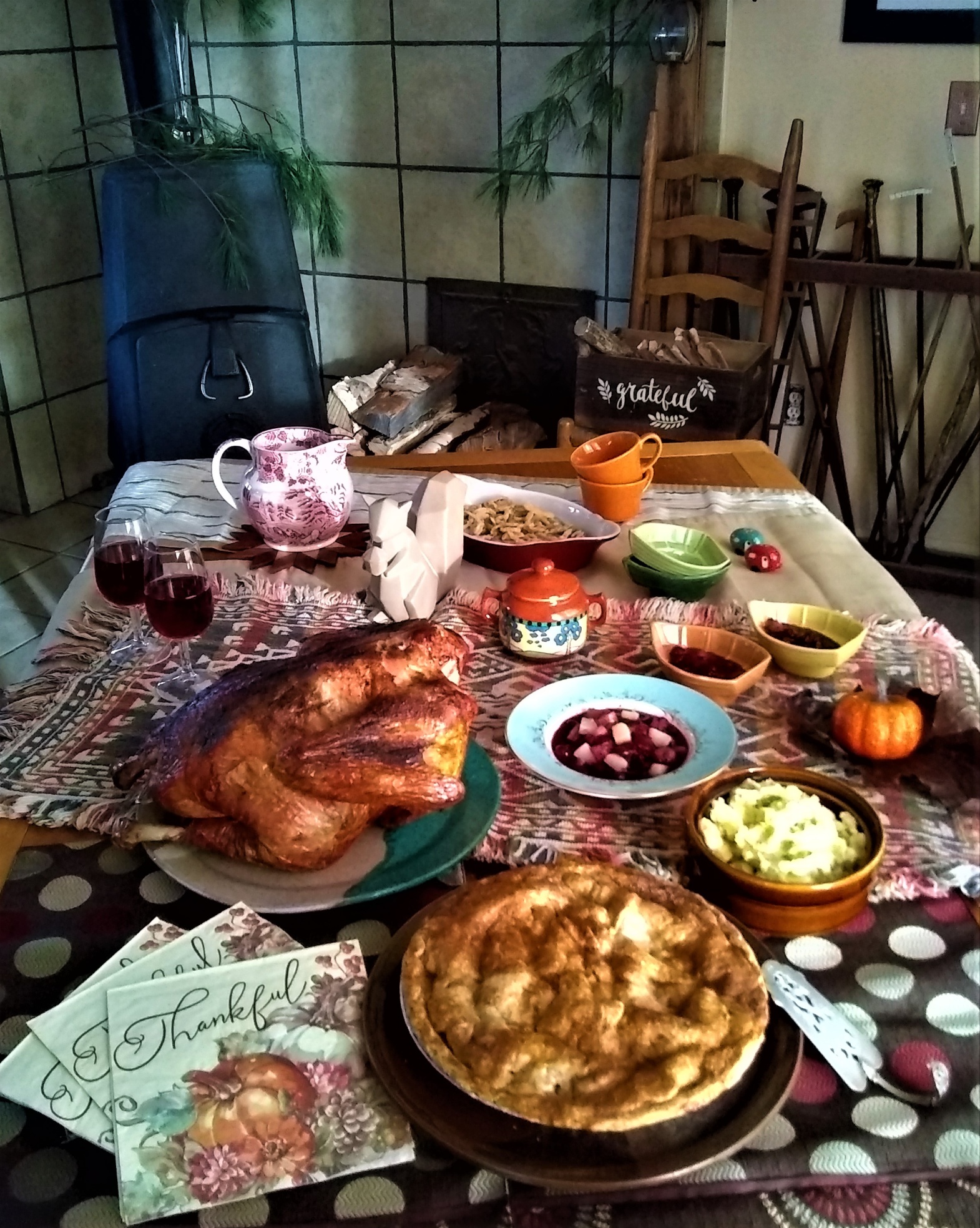 Don’t you love decorating the table with your favorite finds? 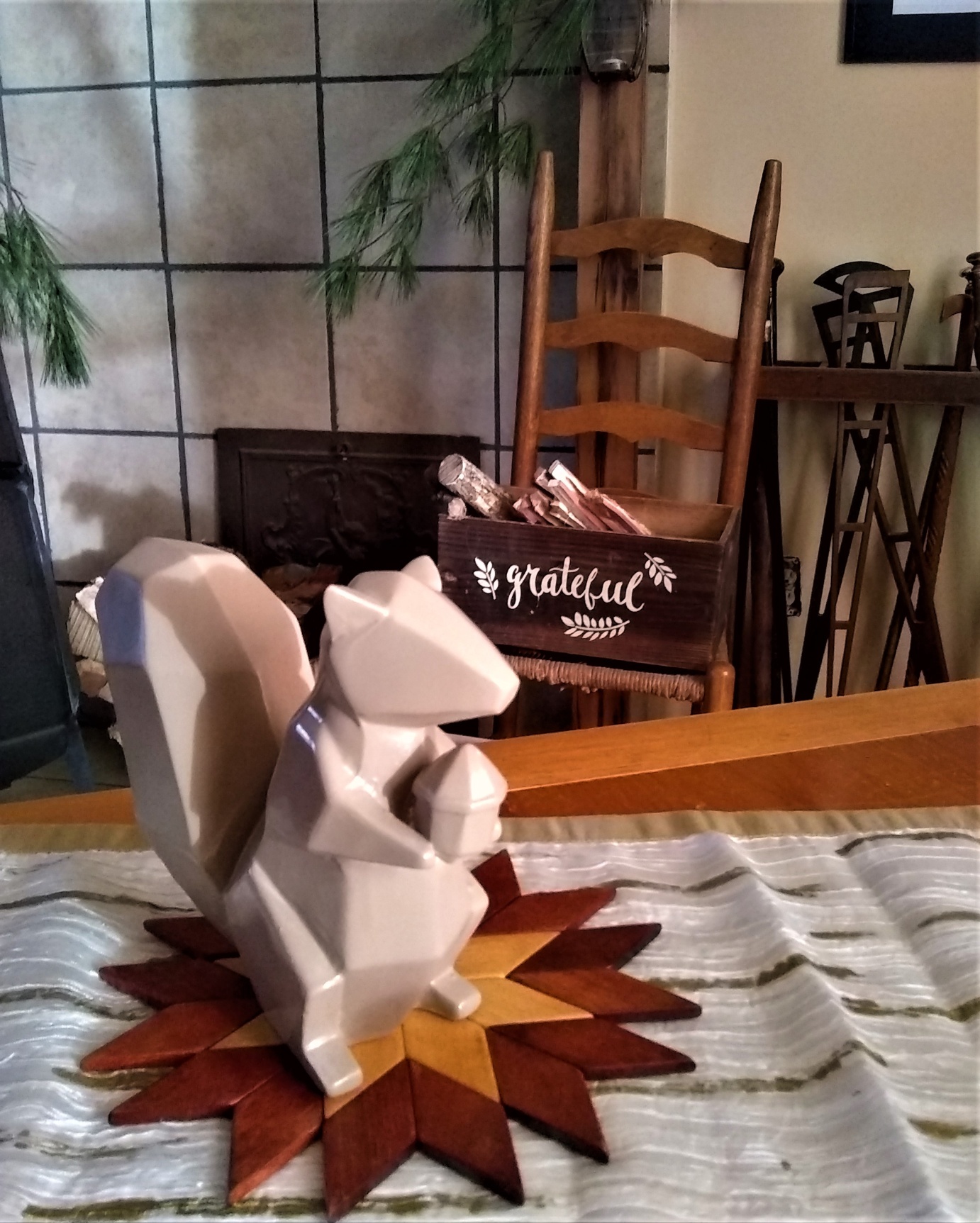 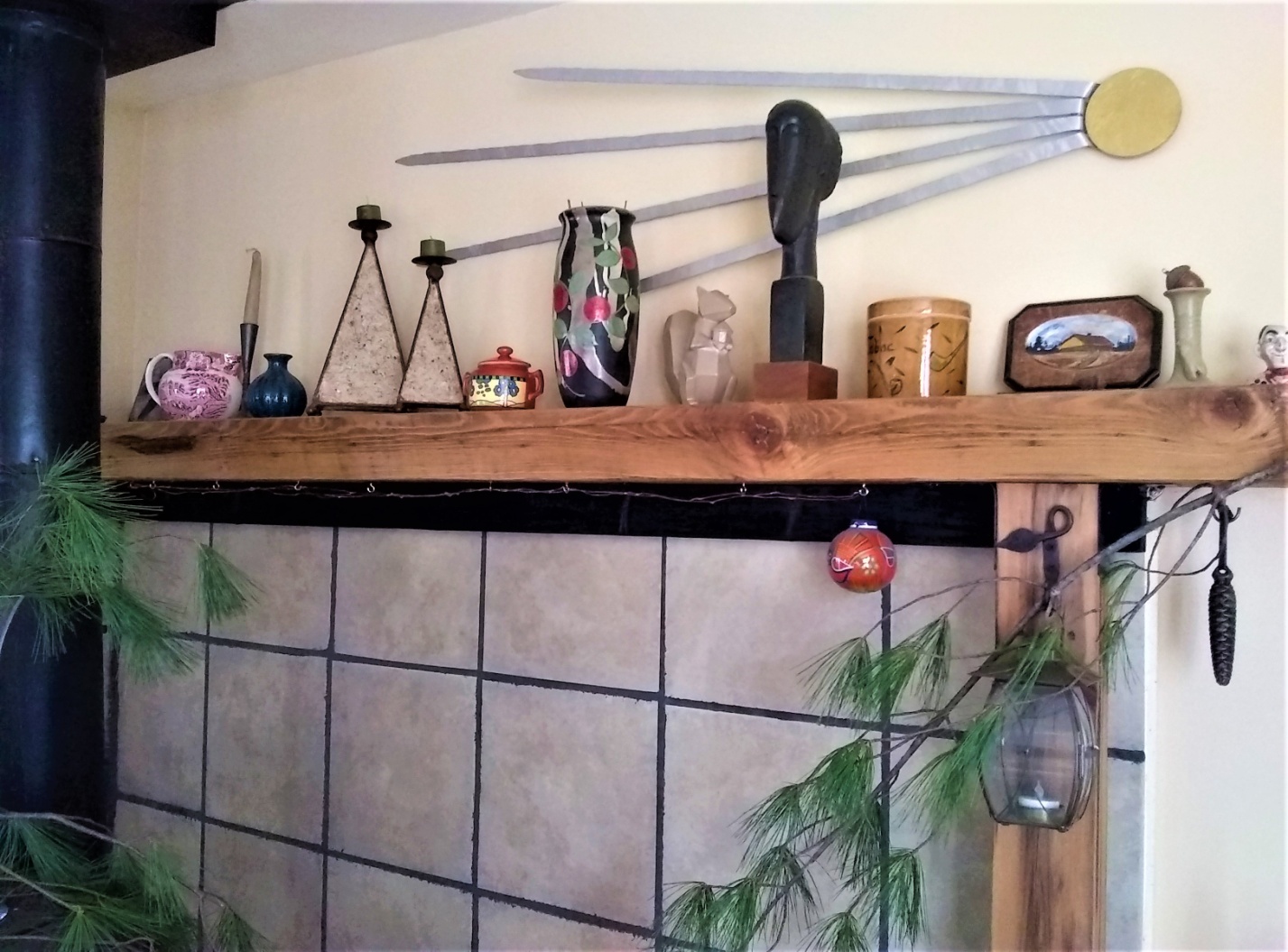 Mid century modern candlesticks mix beautifully with a Modigliani bust and a gold and silver comet over the mantle. 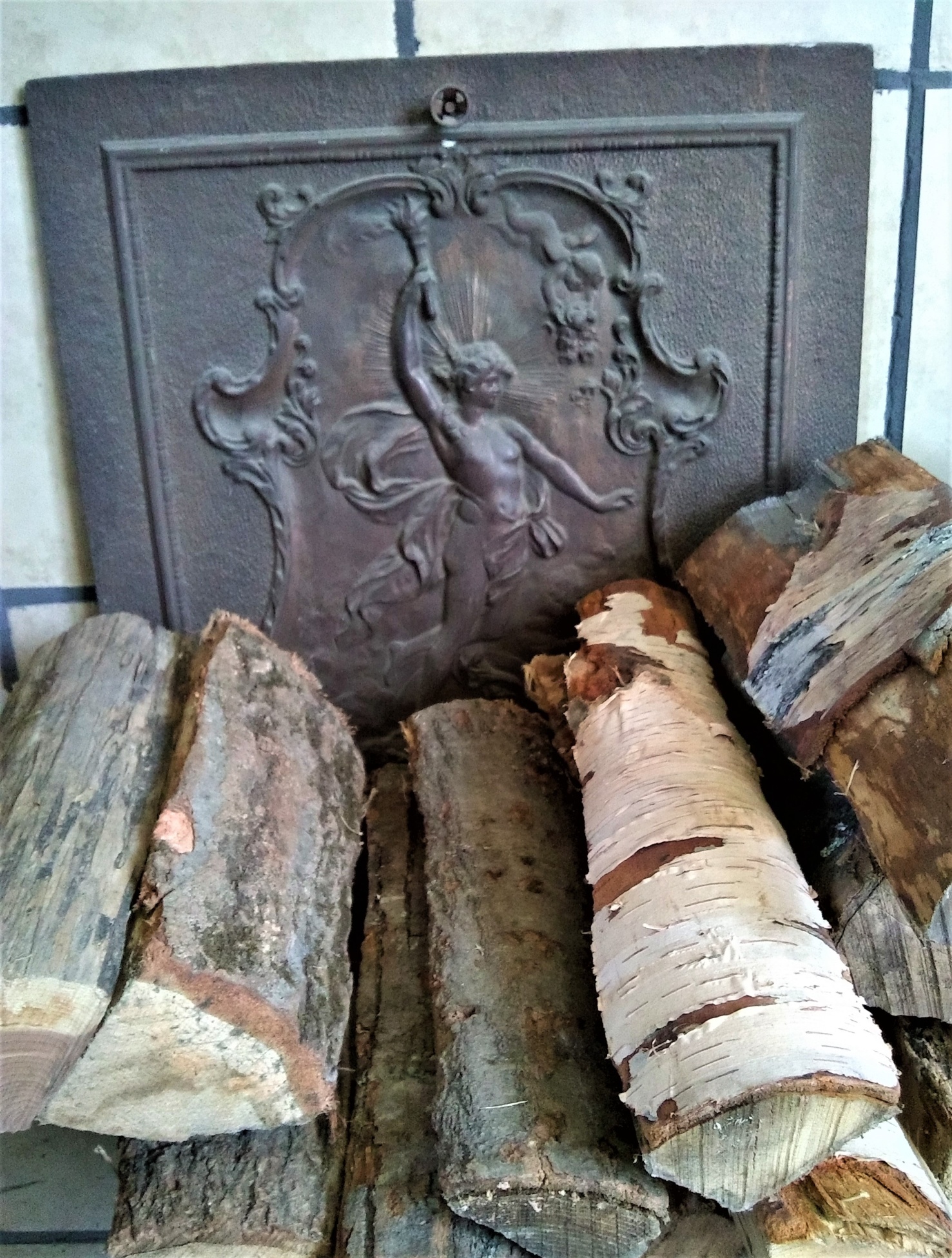 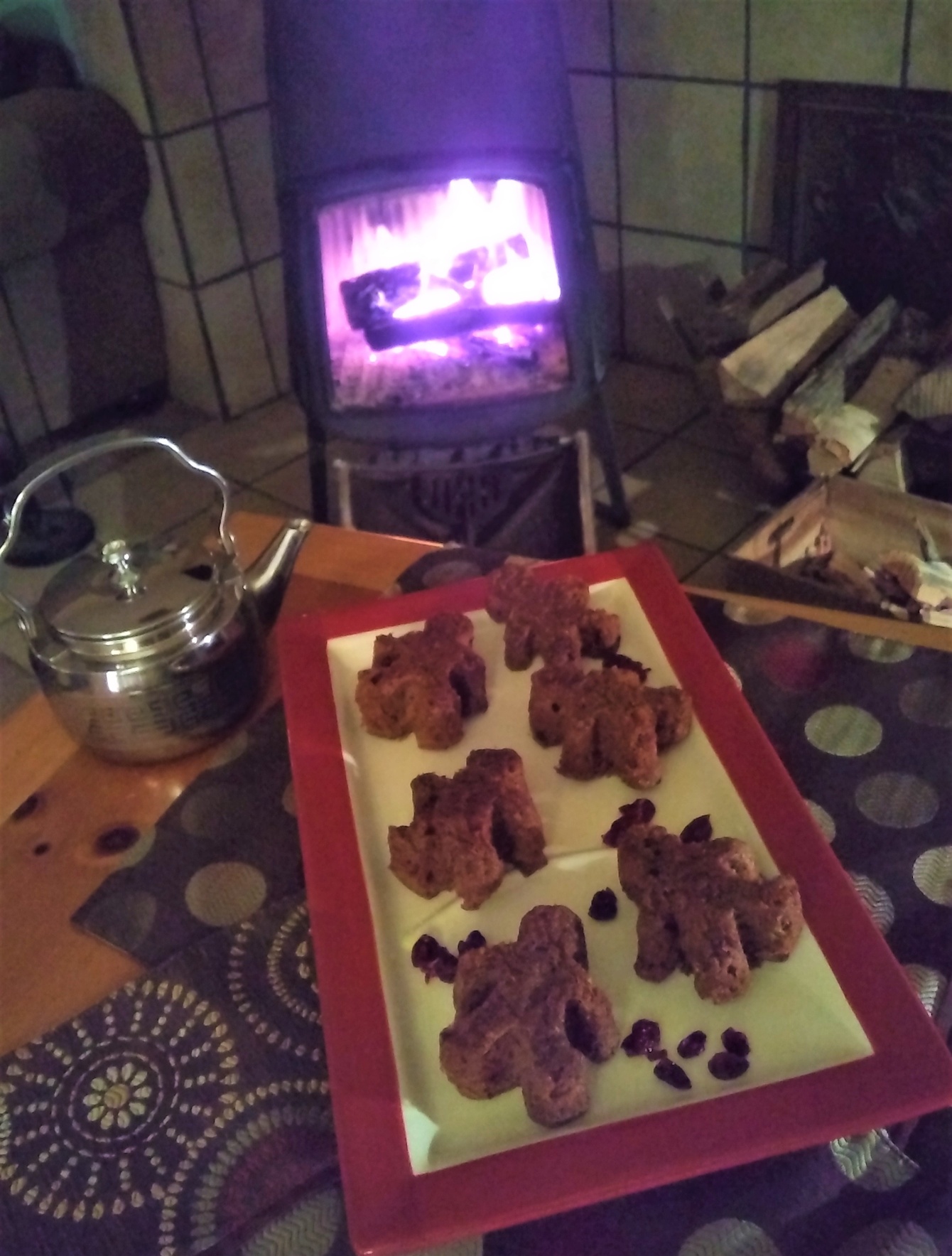 Oops! Almost forgot! Gingerbread boy cakes and tea in case you’re still hungry. Happy Thanksgiving from me to you. Let’s all work together to make our Thanksgiving wishes come true.