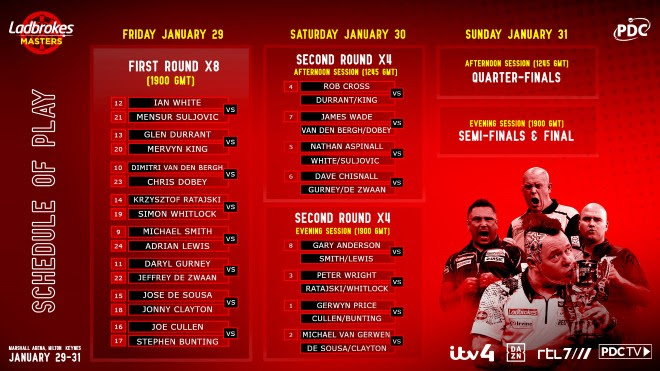 The schedule of play has been confirmed for the 2021 Ladbrokes Masters, which will commence on Friday, January 29 in Milton Keynes.

The £220,000 tournament has been expanded to feature 24 players this year, with the first round seeing the players ranked from 9-24 on the PDC Order of Merit facing off.

The Ladbrokes Masters will conclude on Sunday, January 31, with the quarter-finals in the afternoon session and the semi-finals and final in the evening session.

VOTE FOR YOUR PLAYER OF THE YEAR

Here is your chance to vote for the Just Eat Fans’ Player of the Year Award at the upcoming PDC Annual Awards. Pick your favourite from our 14 player shortlist and you could in with a chance of winning a £25 Just Eat voucher.

Votes are limited to one per person. The Just Eat Fans’ Player of the Year will be announced later in January and the Just Eat £25 voucher winner will be contacted by January 31. Votes close at 2359 GMT on Sunday, January 17.