MEN IN SKIRTS: Rip Up the Rule Book and Rock your Tutu! Viva the Man-Skirt! 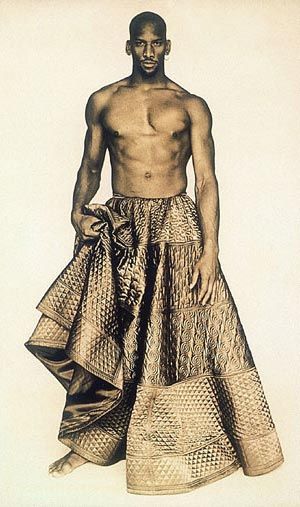 A defining point in fashion and a flashbulb memory for me was Paolo Roversi’s unforgettable 1985 image of Jean Paul Gaultier’s male model wearing an 18th century woman’s quilted petticoat skirt. It was a heart-stopping, treble ‘wow’ fashion moment: here was a gorgeous, muscular male specimen effortlessly tucking at the hem of a sumptuous floor-skimming A-line skirt. Oh, the delightful genius of it!

It’s not that men haven’t been wearing skirts in the course of history, you see – quite the contrary, but somehow this image put an audaciously bold marker in modern fashion history books. It was a watershed moment, a fashion epiphany: the 20th century man-skirt had arrived and was going to stay.

Back in the Eighties men’s fashion was all about ripped jackets and torn jeans, baggy jumpers, bomber jackets, Hawaiian shirts (and moustaches – think Tom Selleck in Magnum), the obligatory double denim, the baggy tracksuit, fluorescents, leather jackets and shoulder-padded power suits. And of the above was crowned by the most controversial of all hairstyles, the ‘trailer-trash’ mullet. It was into this macho-male fashion landscape that the ‘enfant terrible’ of French couture, Jean Paul Gaultier, stepped, and dared to put a man in a skirt. 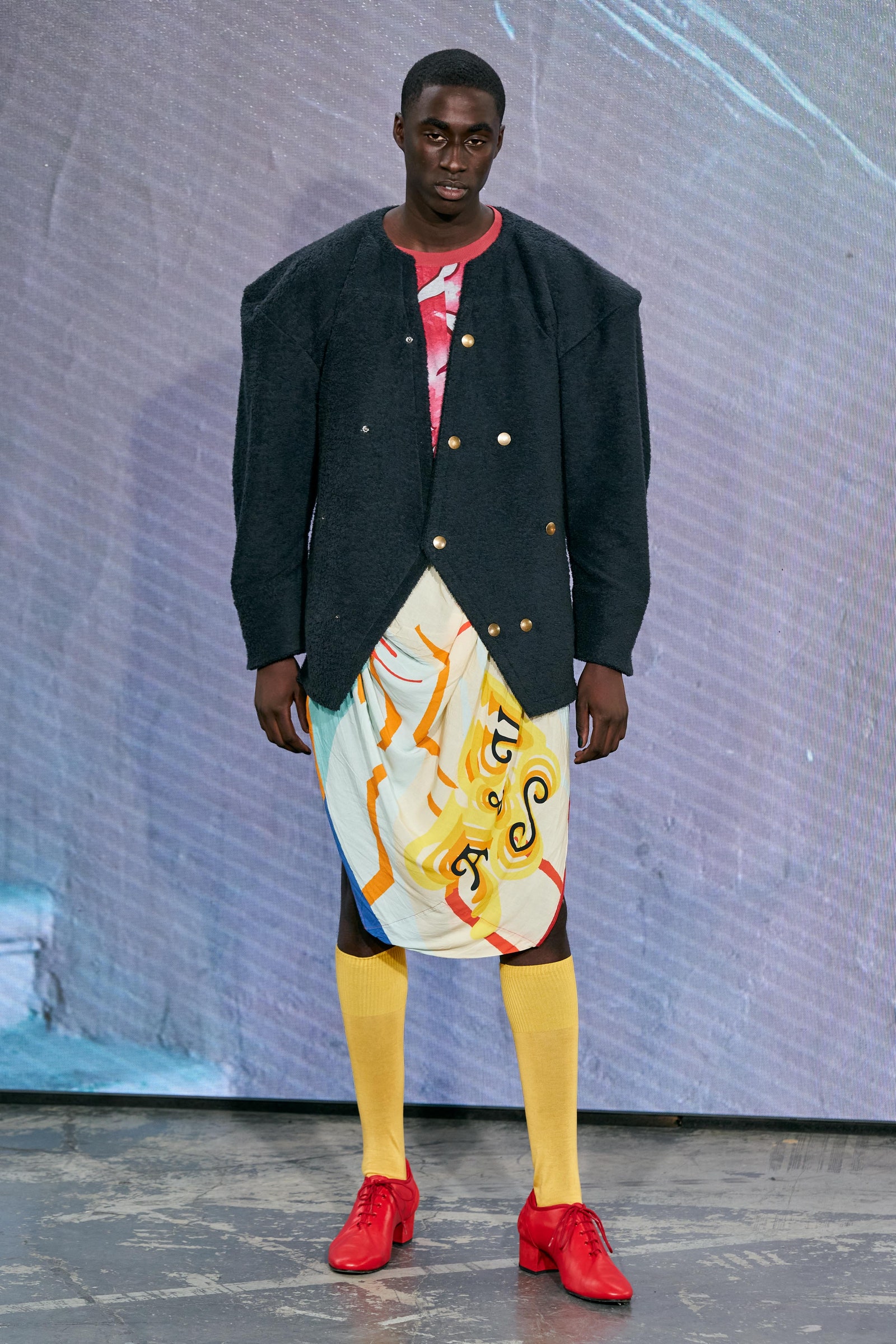 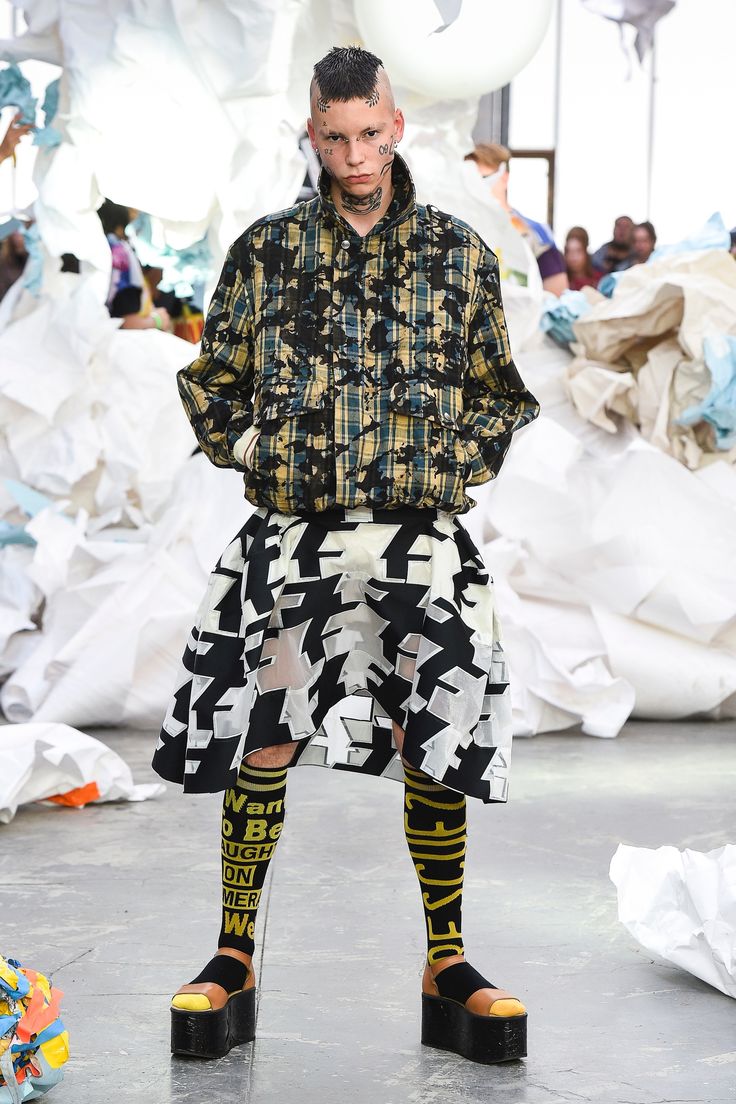 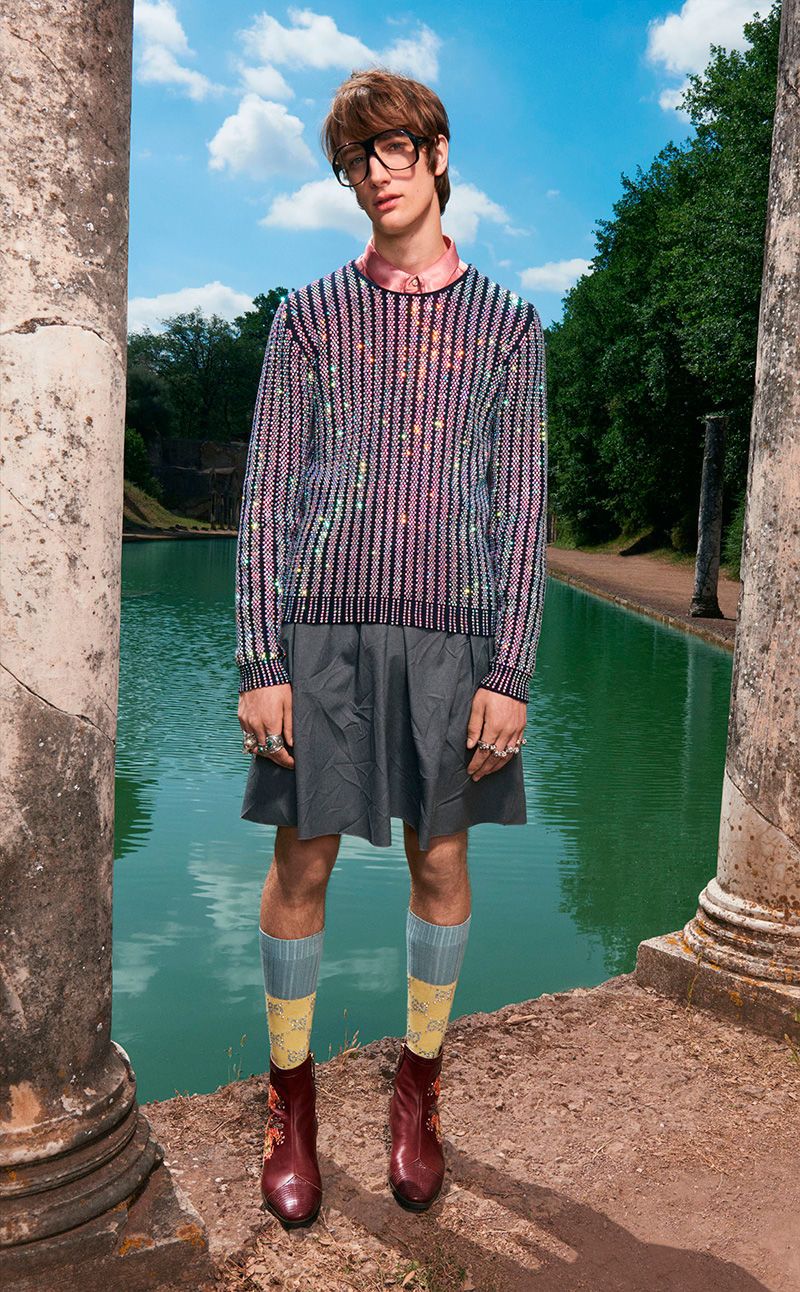 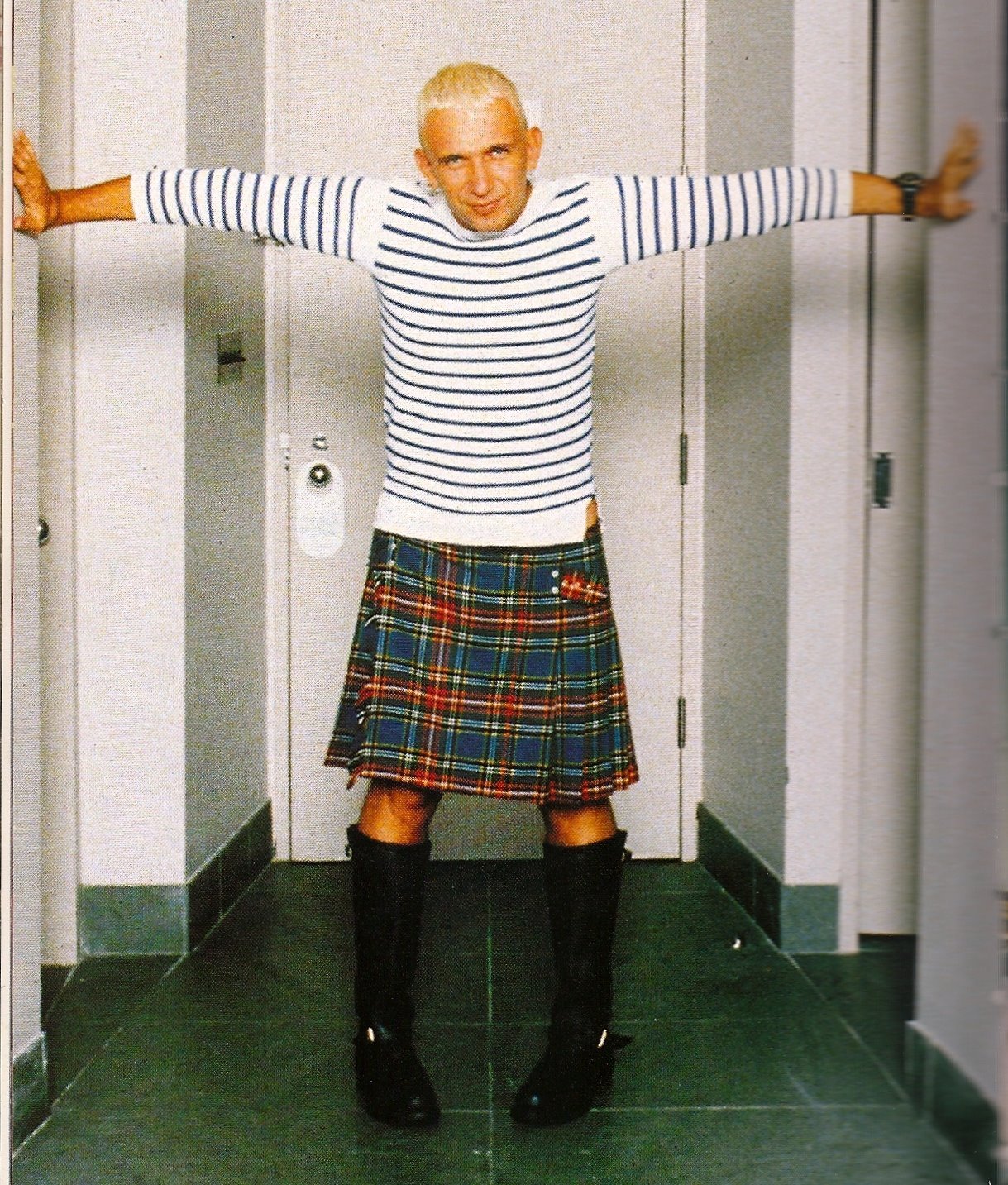 Jean Paul Gaultier’s cavalier offering was a critical juncture in men’s fashion and soon became a trend that surreptitiously sneaked onto the catwalk. Since 1985 it has gained much momentum with high profile celebrities confidently flaunting their man-skirts and with designers like Kenzo, Giorgio Armani, Rick Owens and Andreas Kronthaler for Vivienne Westwood fully embracing the fad, creating their own versions of this somewhat contentious and experimental trend. On a personal note, in the early Nineties on holiday in Portofino, when my heterosexual male friend confidently flaunted a pair of muscly legs in a crotch-skimming wrap-over Armani skirt, I knew this trend had hit mainstream male fashion. But I couldn’t help but wonder, did it have staying power?

The answer is a resounding YES. In 2022 designers like Thom Browne in particular, but also stalwarts like Rick Owens, Yohji Yamamoto, Issey Miyake, Comme des Garcons, Fendi, Burberry and Prada put their gravitas behind men’s skirts and the trend simply went from strength to strength (pun intended!). One simply knows that when the likes of H&M offers a pleated skirt for men on the high street, it’s definitely time to reconsider the current ambivalence around male skirt-wearing. Think Harry Styles, Gerard Butler, Ewan McGregor, P. Diddy, Kanye West, Jaden Smith, Kurt Cobain, Axl Rose, David Bowie, David Beckham and Vin Diesel … the list of celebrities who adore their skirts (and look phenomenal in them) is endless. 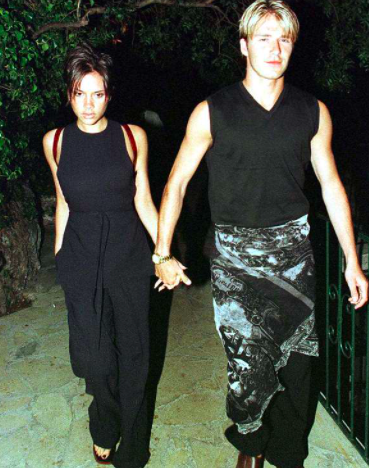 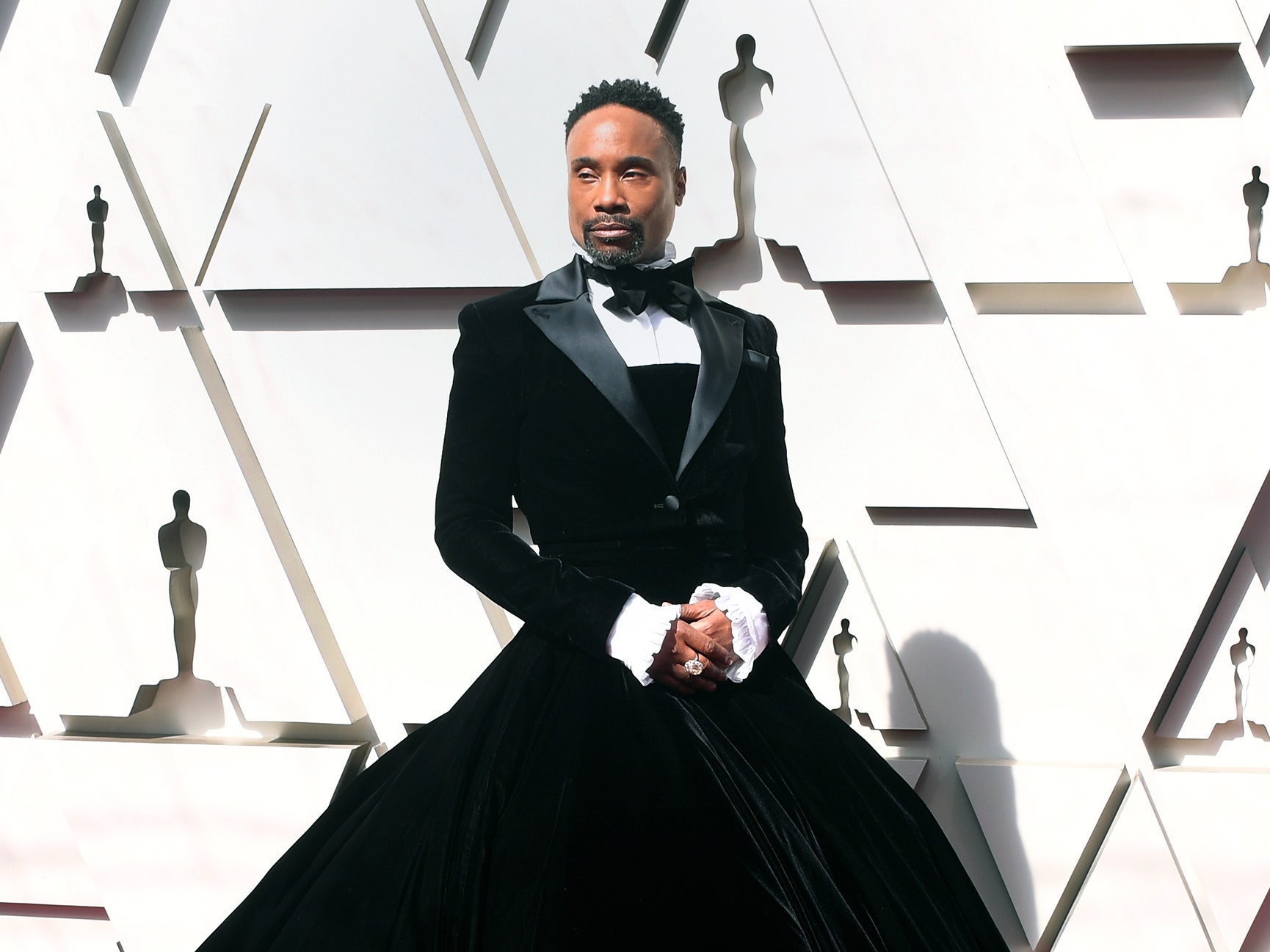 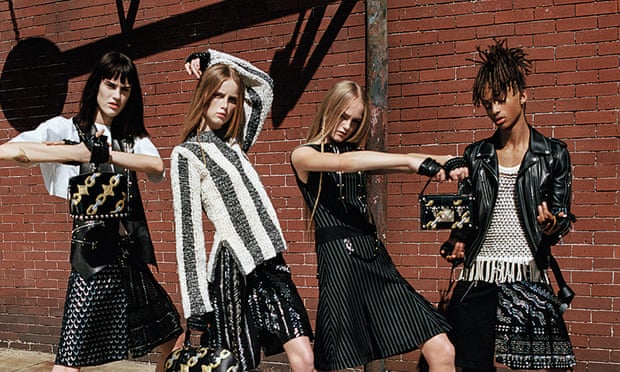 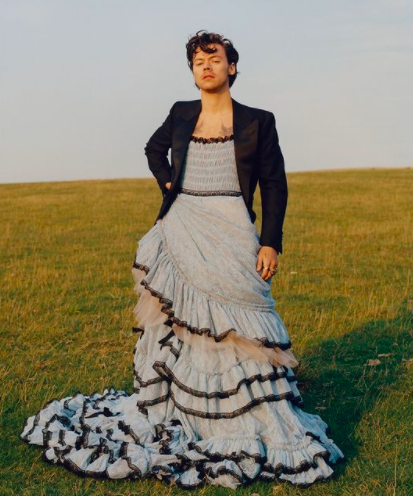 To put things into perspective, let’s take a whistle-stop tour through the history of men’s fashion. All those eons ago, when man became an upright walker the need for skins or clothing to modify not only sexual display, but to protect the body from abrasion and the cold was obvious. When cutting and textiles were invented (in 50000 BC clothing, bags and nets were already used by the Neanderthals), covering up the human body started to take on a different and more decorative shape.

Thereafter came ‘style’ and then followed what we now call ‘fashion’. The earliest clothes were very similar for men and women. In Europe, however, men’s and women’s clothing slowly but surely started to diverge in shape, a trend that is true to this day.

For the ancient Egyptians, those working in the fields wore shorter gauzy loin-cloth wraps, those in the temples and palaces slinky and fitted wraps. The Greeks and Romans similarly wore loose flowing togas (‘dresses’) in the forums and palaces, while the Hypolyte and Legionary soldiers wore fitted practical, easier-to-move-in military gear. As a rule, the warmer the climate, the shorter and lighter the garment coverage. In contrast, the northern and winter Europeans, Saxons and Viking warriors needed wet and cold-weather attire, so they adopted trousers or leggings.

In the Middle Ages Europeans – both men and women – wore garments that resembled what we would call dresses today. The cold climate dictated head-to-toe wrapping, the men’s version was slightly shorter at the hem, driven by their function as workwear and the women’s similar if a little more decorative. In time men’s dresses became shorter and shorter (to the point where they’re now called ‘shirts’ whereas women’s ‘dresses’ grew in length). Around this time trousers and tights started to be seen. In the later Middle Ages, France and England would introduce laws banning men’s tunics from rising too high exposing the buttocks, (albeit wrapped) in the name of decency.

Jumping to mid-20th century; male skirts had disappeared altogether and were replaced by suits. There was a flicker of a unisex movement in the 1960s trying to even out the differences between the genders’ traditional dress code, but the result was that women started to wear more men’s clothing, and not the other way around.

In truth menswear has had a far greater impact on women’s fashion over the past century than the other way around: women started to adopt male garments like suits, trousers, jeans and shirts while men rarely wore dresses and skirts. It’s in the categories of sportswear and workwear that men’s fashion has especially triumphed – the wardrobes of both genders now are dominated by jeans, track bottoms and the likes, all traditionally men’s fashion.

When thinking of men in skirts one involuntarily thinks of the bundled plaid kilts worn by male Scottish Highlanders in the 16th century. The kilt in its modern ‘skirt’ form (Victorian, 19th century) is derived from tartan wraps. Back then the quantity of material very much defined a man’s status, although all was discarded when the fighting started! Also, it needs to be stated in no uncertain terms that the kilt was never regarded as having been derived from a women’s garment. 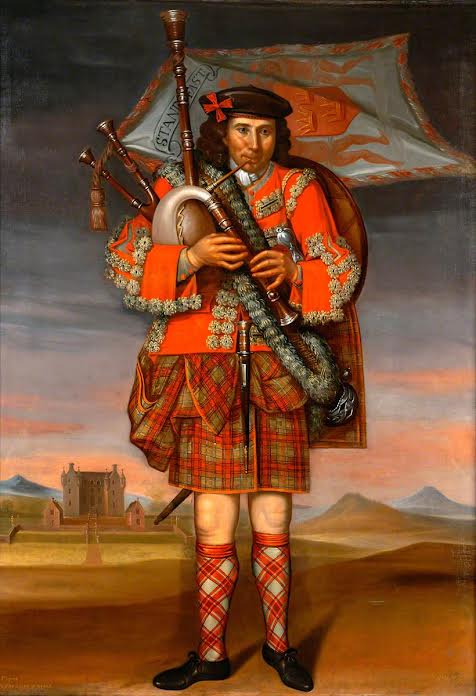 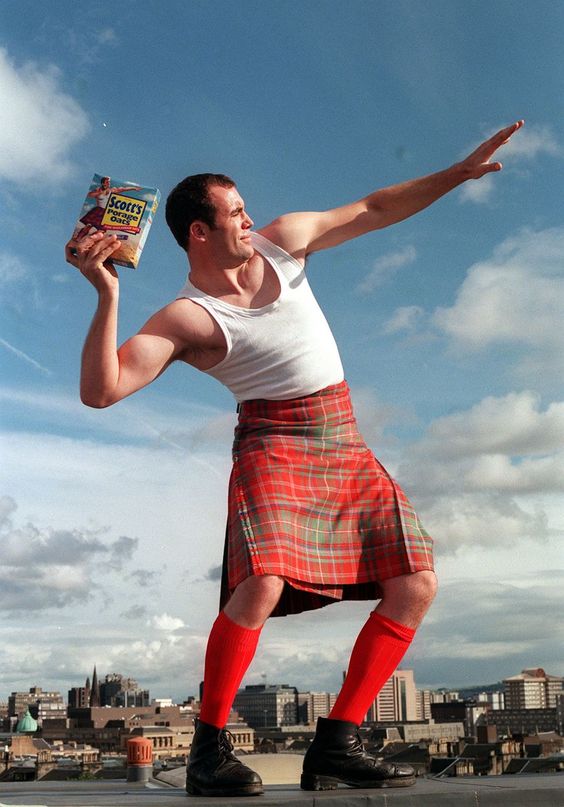 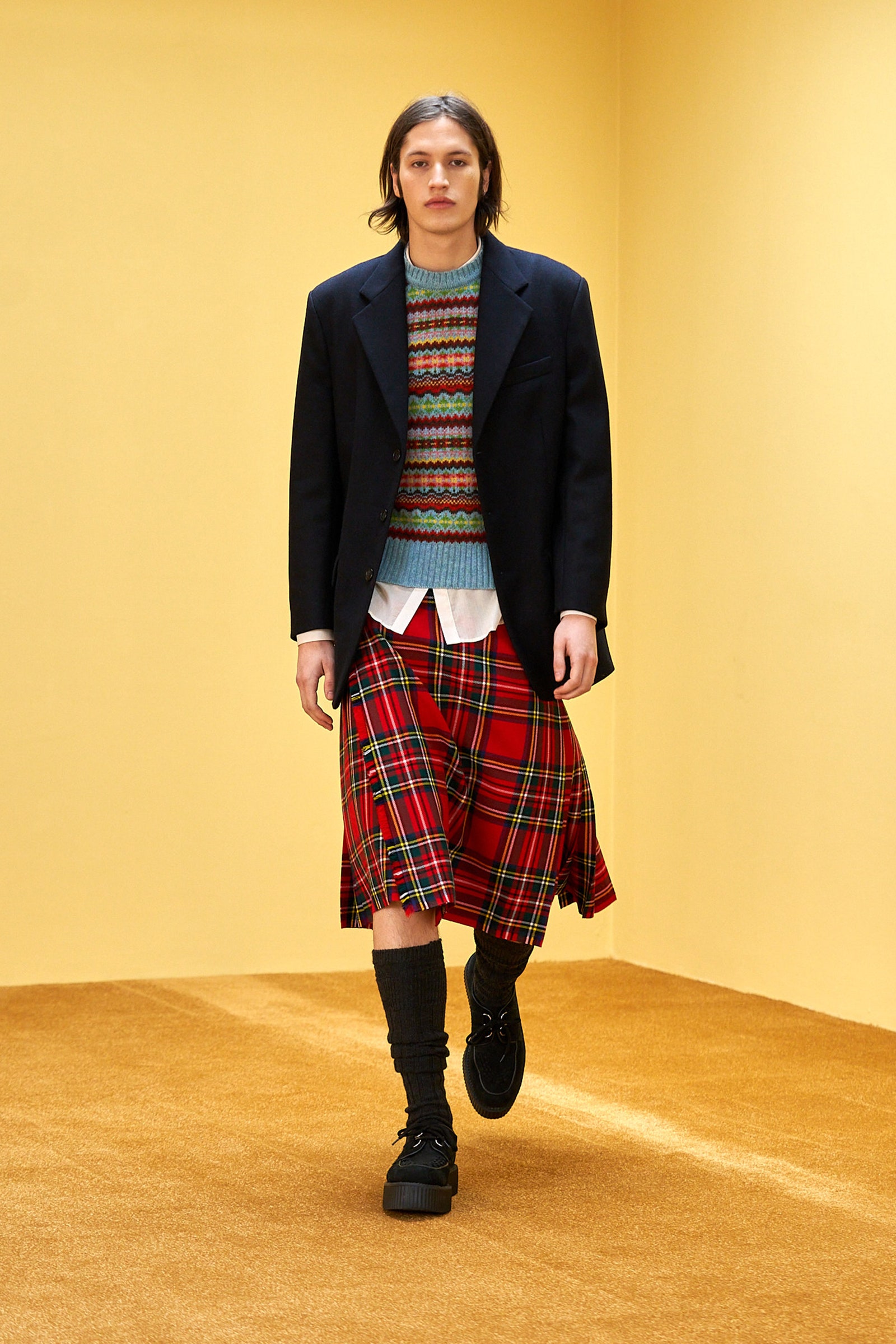 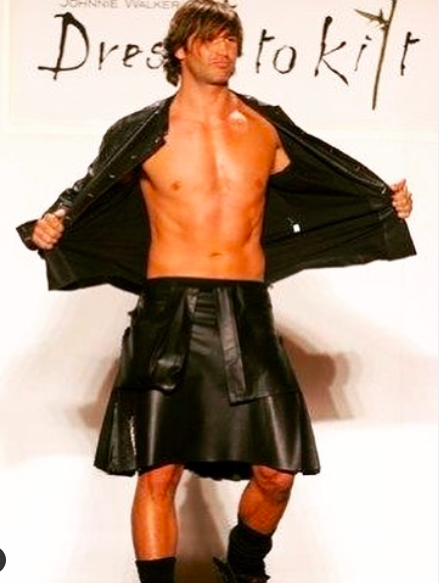 Africa, of course, is no stranger to men wearing ‘skirts’: from flared animal skins girdled around the waist to sarongs intricately wrapped around the body, African men have traditionally embraced the idea of the skirt. The elegant wrap-around kikoi worn by the Maasai in Kenya, Africa, to this day, is clearly a hybrid version of a skirt that not only works extremely well in a hot climate but also makes a wonderful fashion statement. 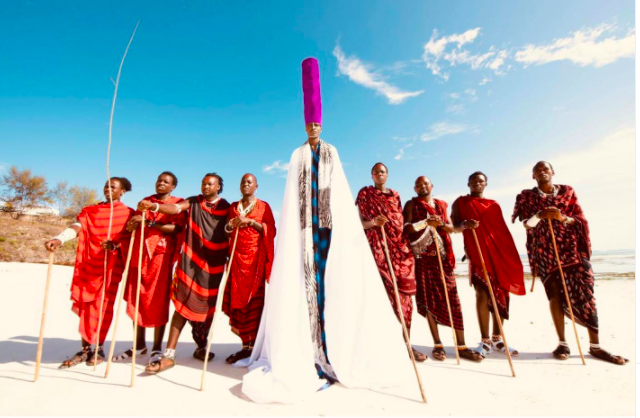 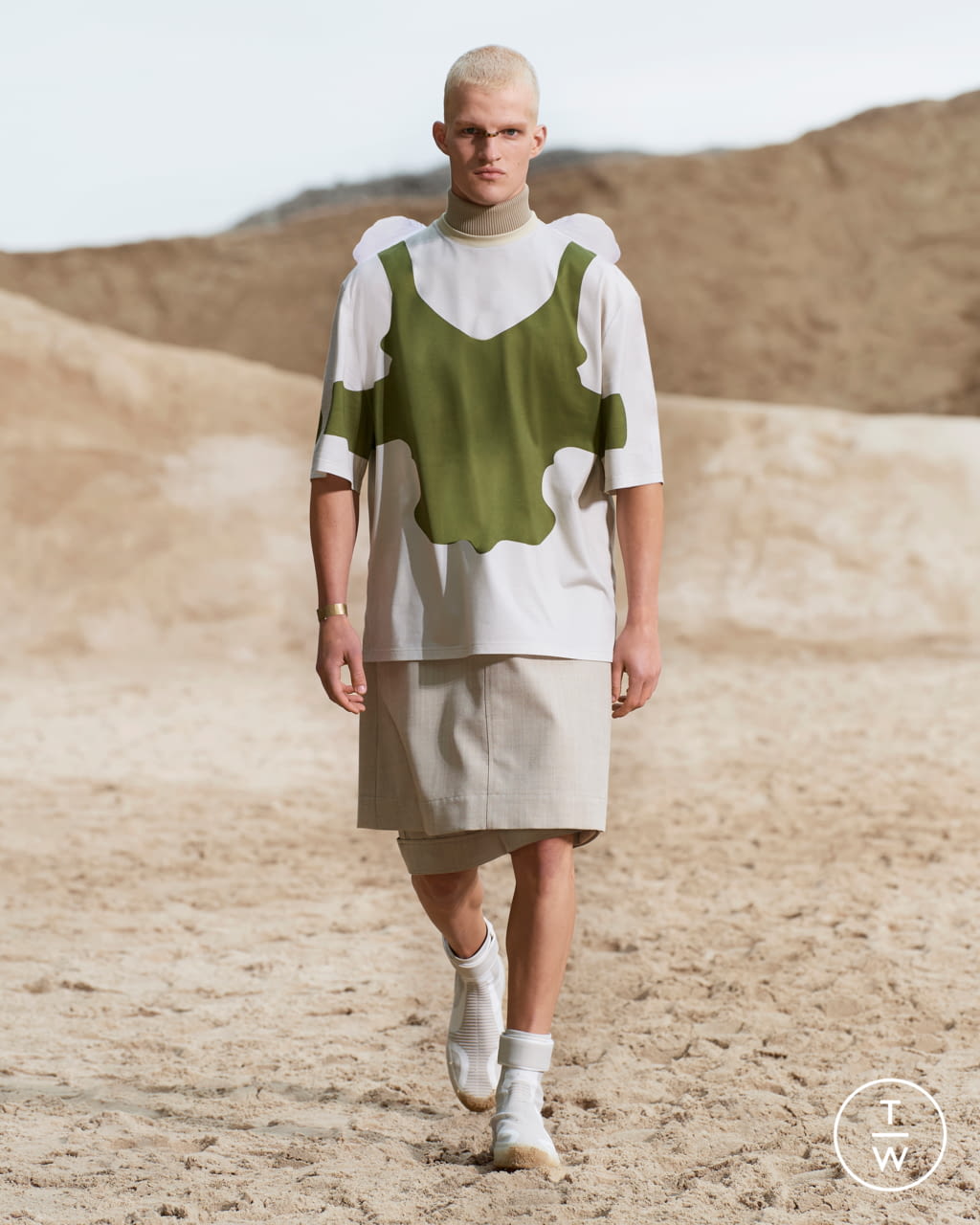 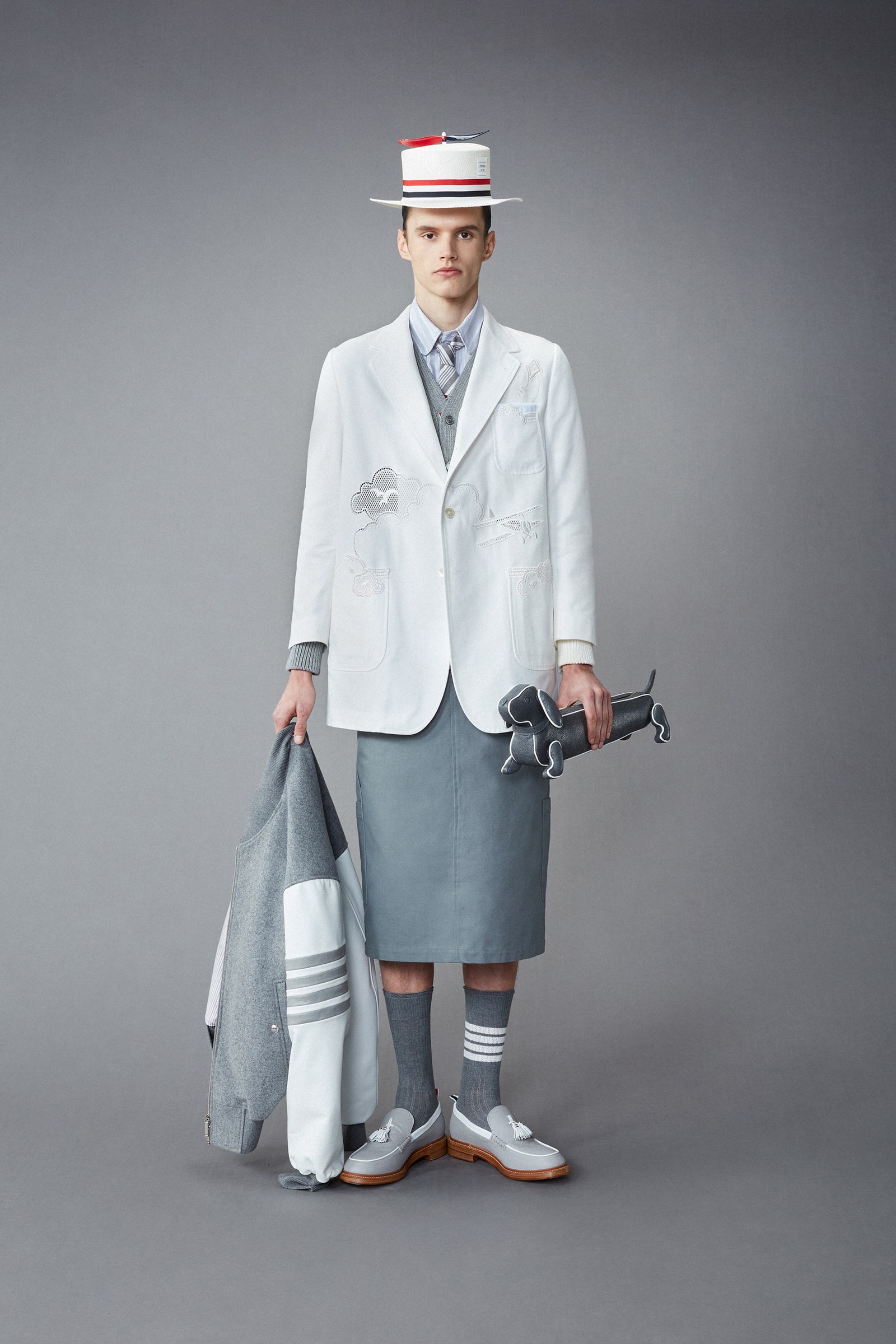 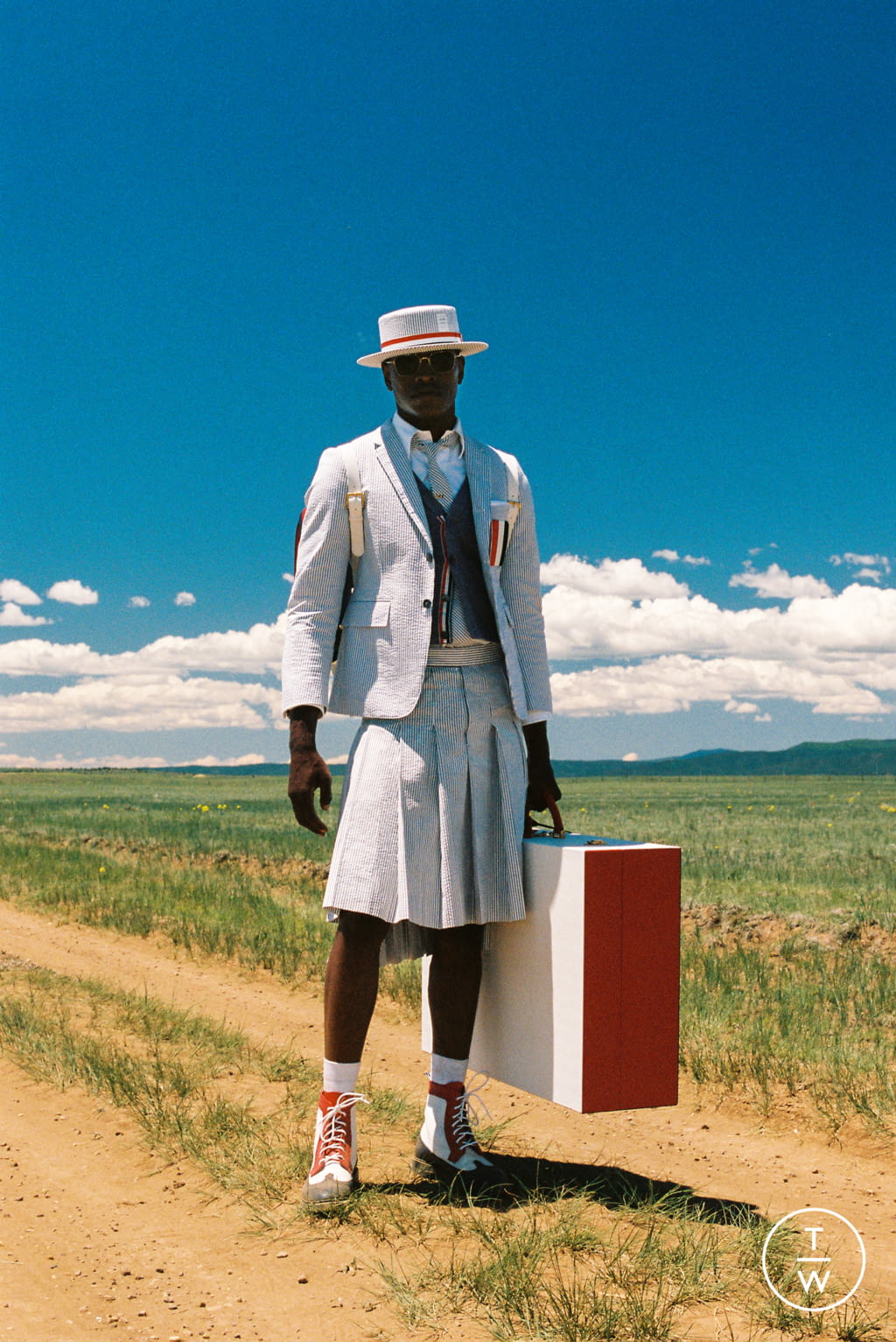 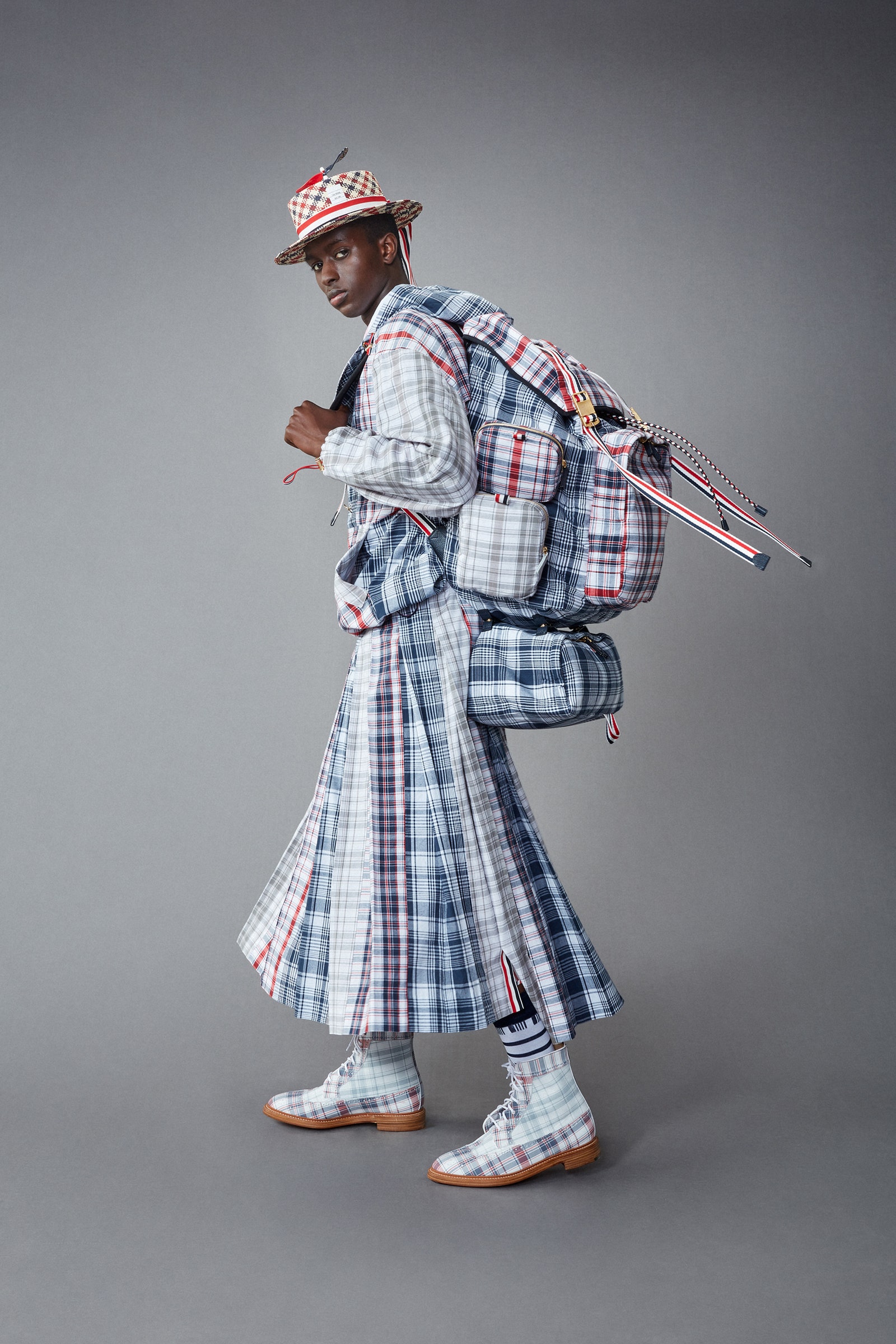 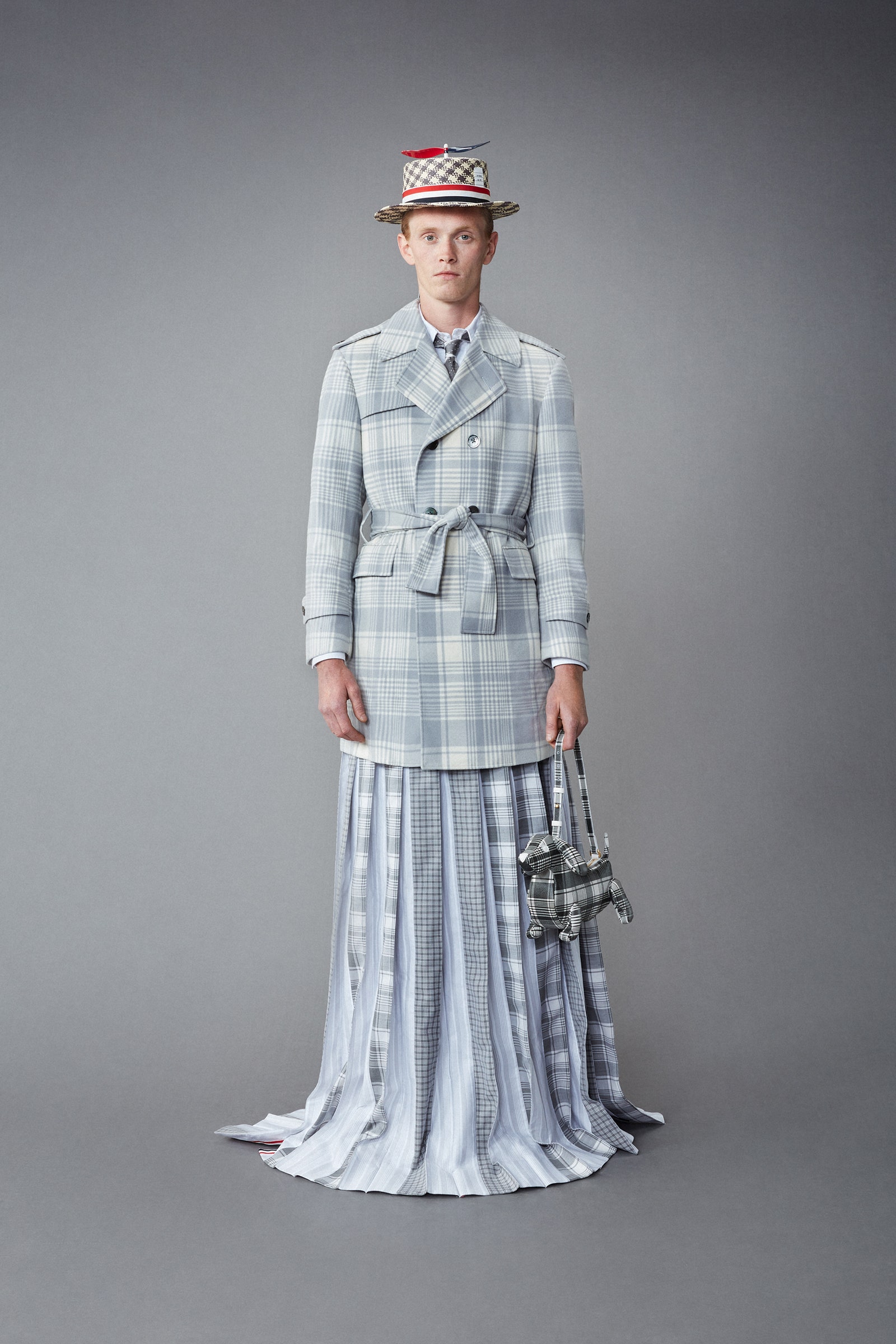 In Africa where gender-fluidity in fashion is rapidly gaining momentum (yet still met with some resistance), designer Rich Mnisi who himself displays his skirt creations in unbeatable style, has done wonders for elevating the perhaps somewhat ostracized male skirt to fashion heights not seen in these parts before. Mnisi, who fearlessly flaunts his downright fabulous designs, has been met with mixed emotions from his fellow South Africans. Be that as it may, legs like Rich Mnisi’s should be seen in nothing but mini-skirts every day! 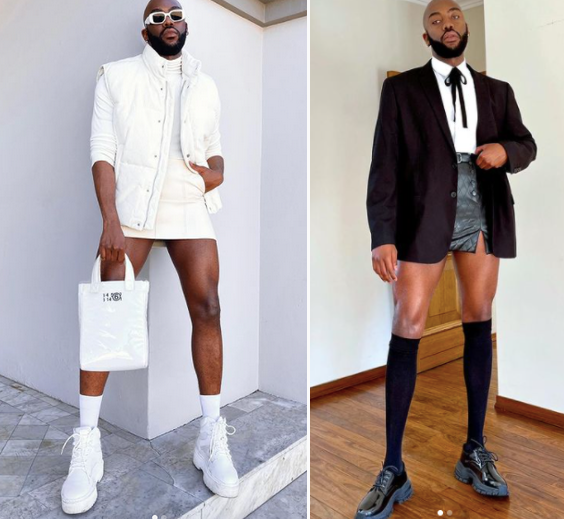 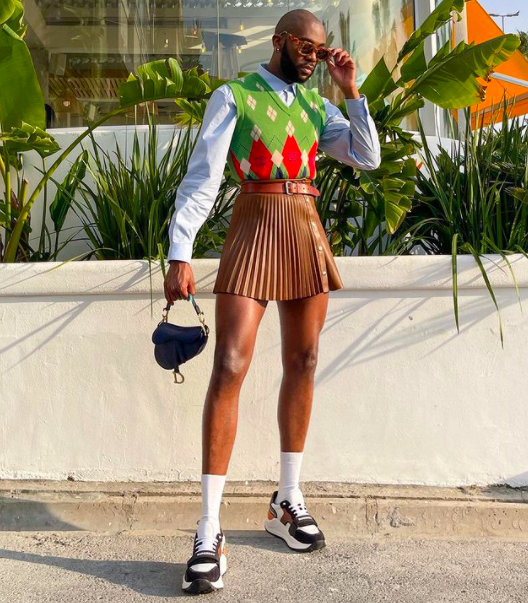 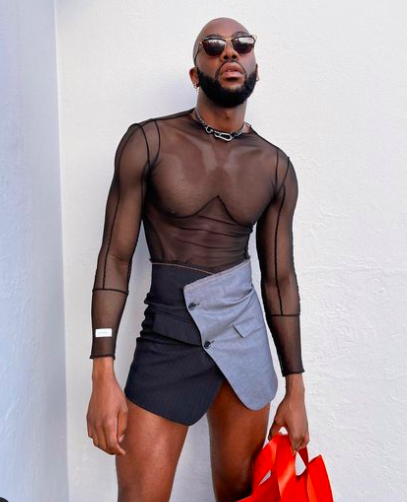 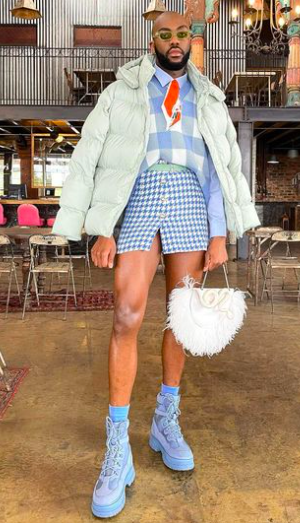 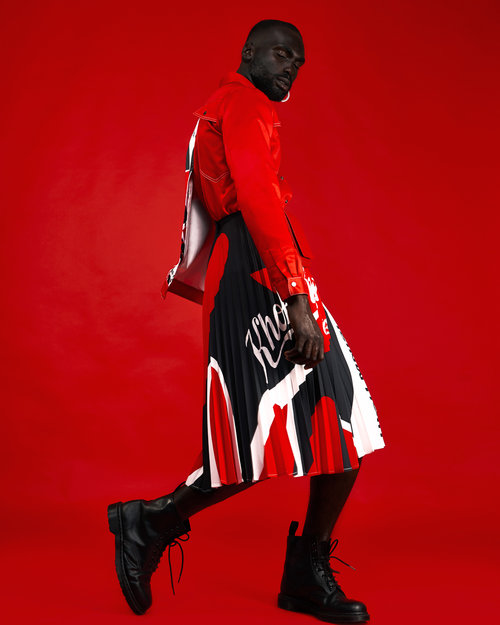 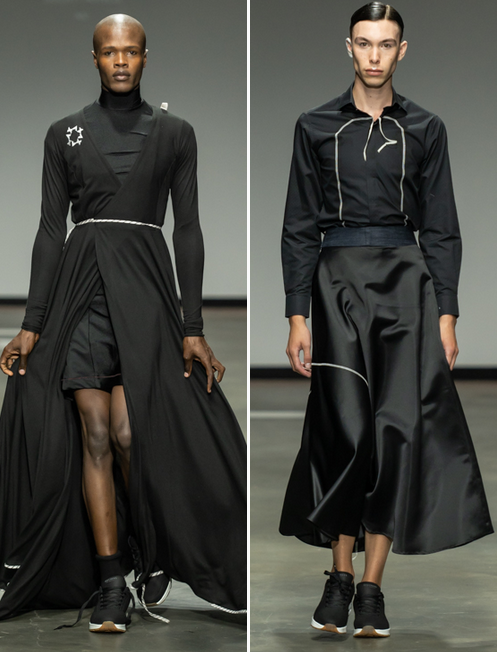 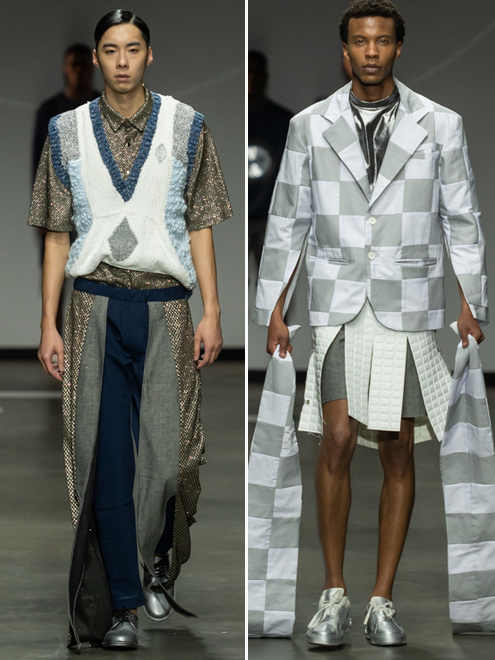 Crossover dressing and gender-fluidity on runways across the world have been gaining much momentum. Male models have been strutting their stuff in what were traditionally regarded as ‘female’ ensembles to wonderful effect during the past global fashion weeks. Perhaps this trend will further serve to ‘normalise’ the wearing of skirts by men?

For the man-skirt sceptics amongst us, surely ‘masculinity’ has little to do with the free-flow of air at the hem of a garment? As for practicality, that’s a different matter altogether … However, for the love of fashion let’s laugh in the face of stereotypes and say YES PLEASE, bring on the skirt-sporting male population! 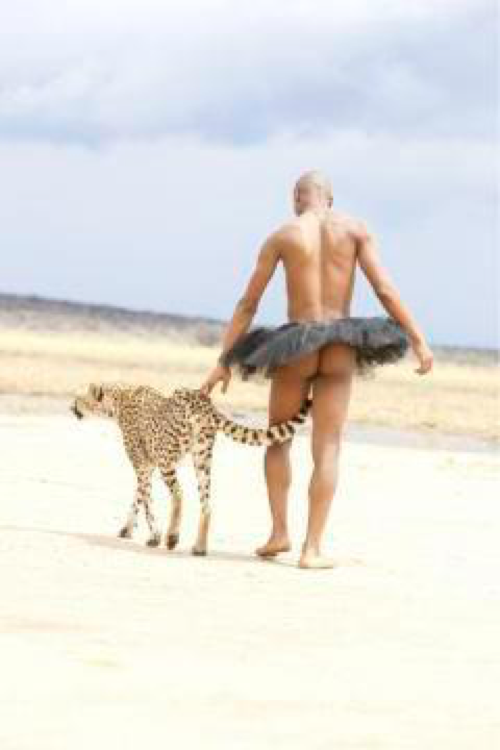