An Gobha Iron Works and Experience has been named as the Overall Best Product award at this year’s Showcase Ireland trade show and exhibition, concluding today, 24 January at the RDS in Dublin Ireland.

The Best Product Overall Winner at Showcase Ireland was Tom King of An Gobha, presented by DCCI’s Rosemary Steen 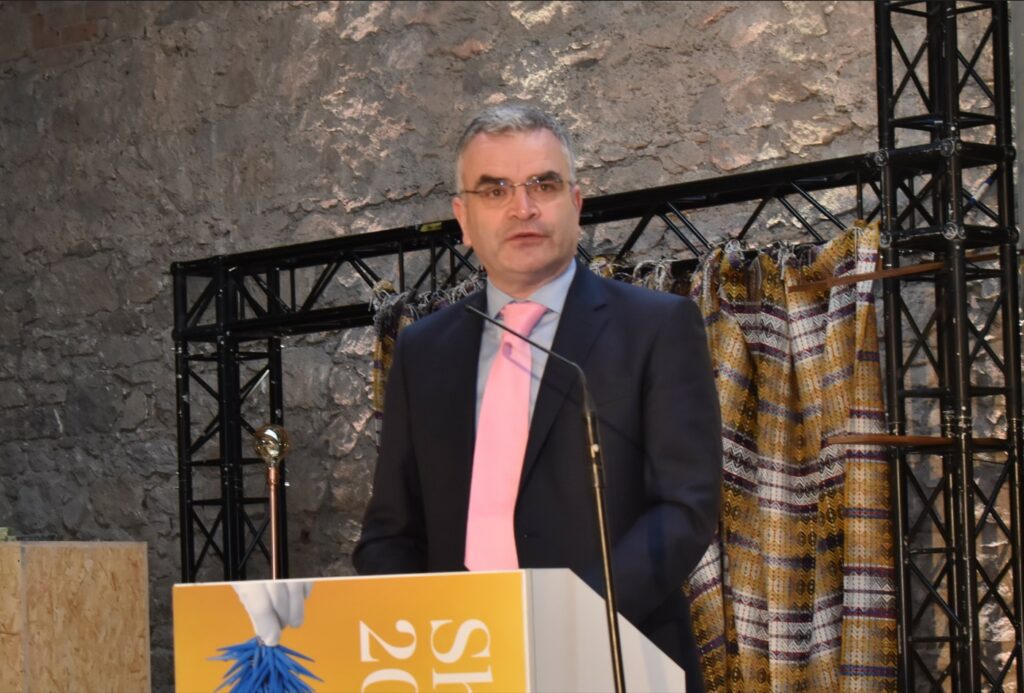 The stunning cross of St Brigid, Ireland’s female patron saint was forged by An Gobha creator Tom King at his ironworks in County Meath Ireland. Dressed traditionally in a recycled sheepskin wrap and skullcap, the ironworks maker epitomised his spectacular craftsmanship in ancient Celtic symbols and contemporary designs when he was presented with his award on the opening day of Showcase Ireland (22 January). The overall winner was supported by LEO, Ireland’s Local Enterprise Office to achieve his success. 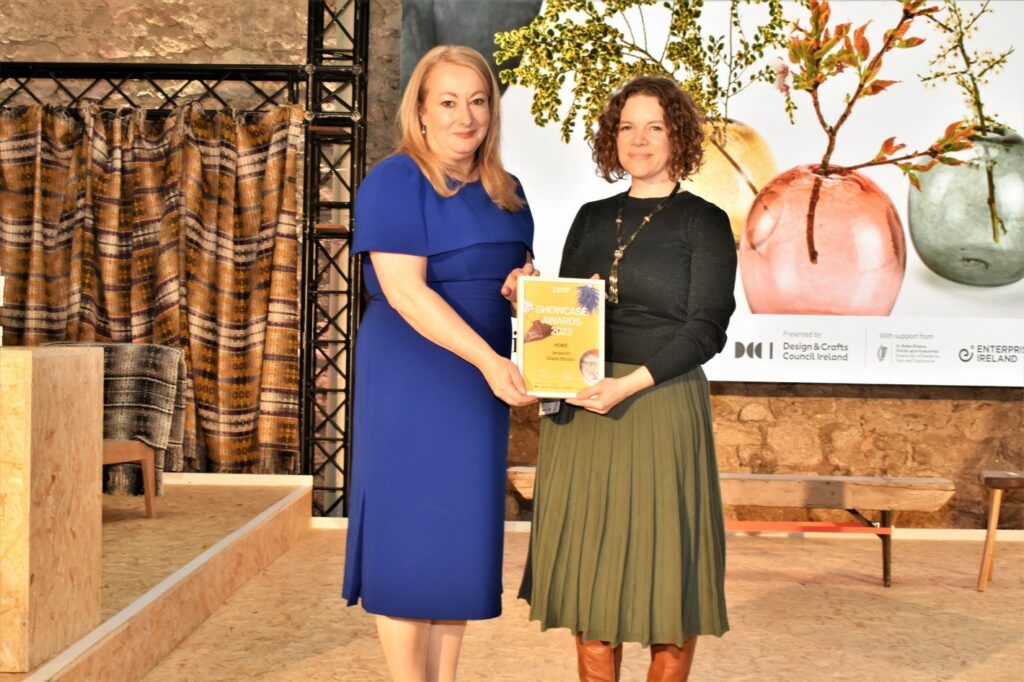 The winner of the Showcase Ireland Home category was Kathleen Leadbetter (right) of Jerpoint Glass Studio in County Kilkenny, presented by the DCCI’s Rosemary Steen 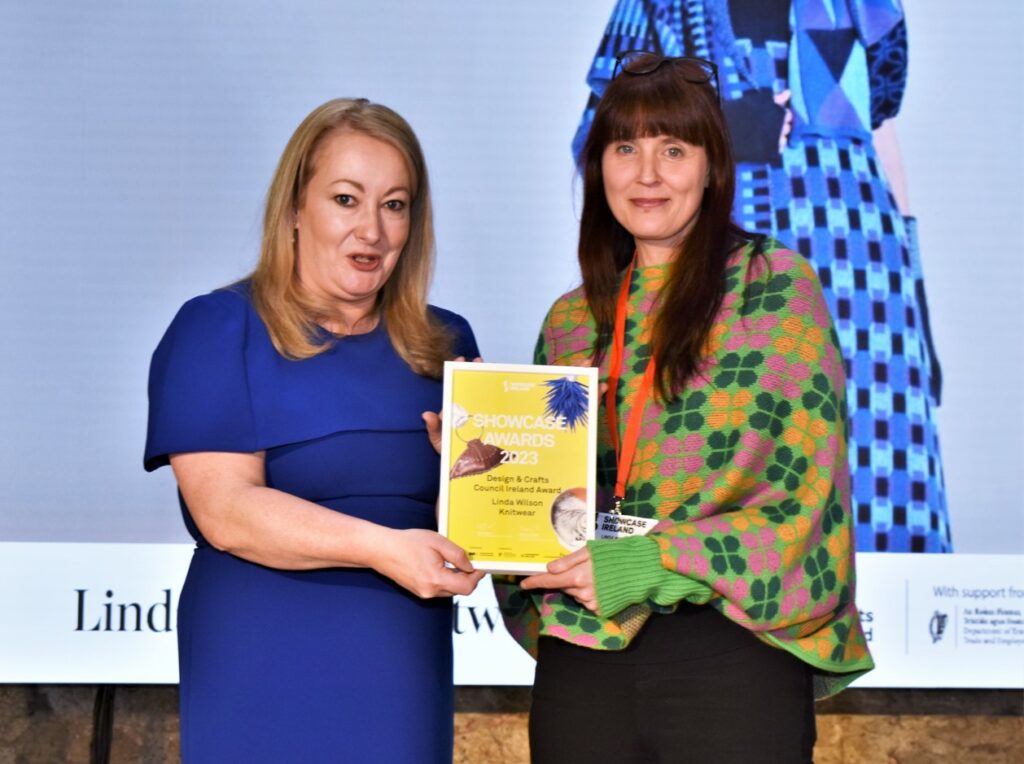 This year’s trade show, the first since before the pandemic to garner almost 400 exhibitors and over 4,000 buyers from 26 countries, was opened by Dara Calleary TD, Minister of State for Trade Promotion and Digital Transformation, highlighted the passion, resilience, agility and innovation among Ireland’s design and craft sector and epitomised by Tom King of An Gobha.

“On a dreary January day, if we could get everybody who walked into the RDS here to be able to sense the explosion of colour I think it will get us through January in a better way,” said Minister Calleary. “One of the main goals as Minister is (that) we want to work with Irish business and with the LEO network in particular in how we can get Irish business not just online but get them to think digitally as well.” 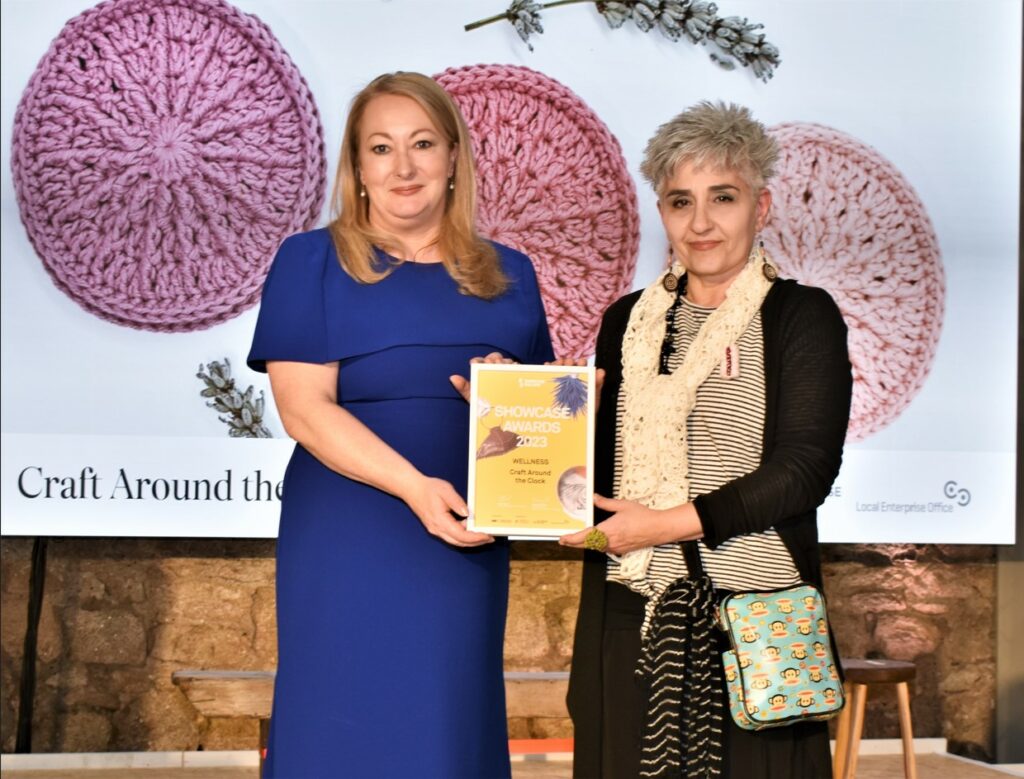 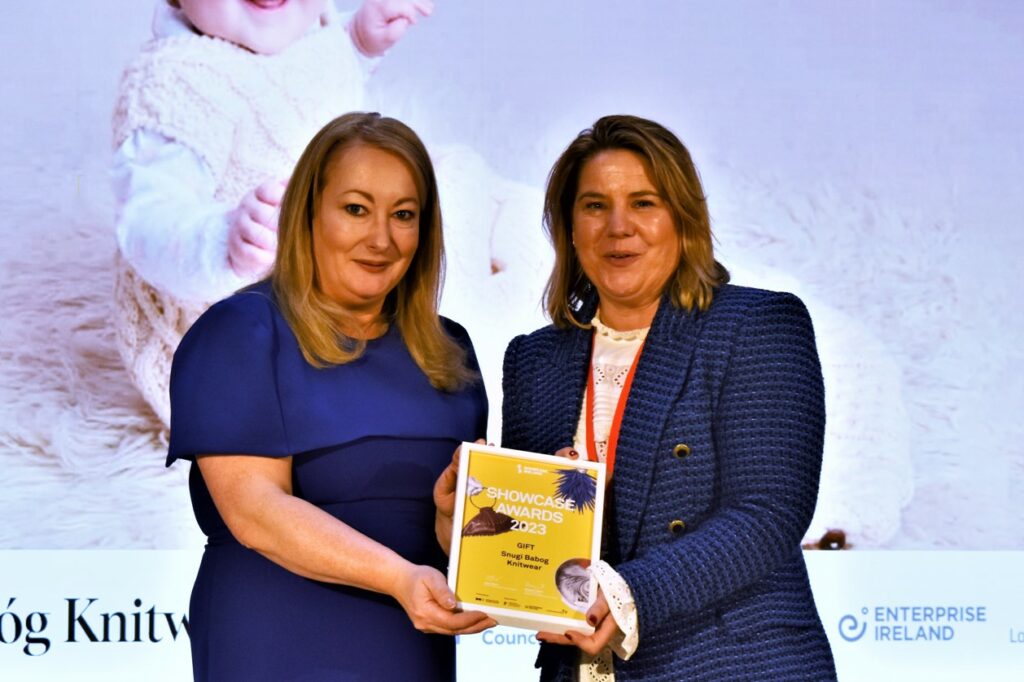 The annual awards, presented in association with DCCI (Design & Crafts Council Ireland and Enterprise Ireland with support from the government of Ireland in nine different categories of trade and design.

“We have only ever seen these numbers on one previous occasion,” said DCCI’s chief executive officer, Rosemary Steen of the numbers of exhibitors and buyers involved with this year’s show. “We are just so excited on reaching those levels, post-pandemic.” 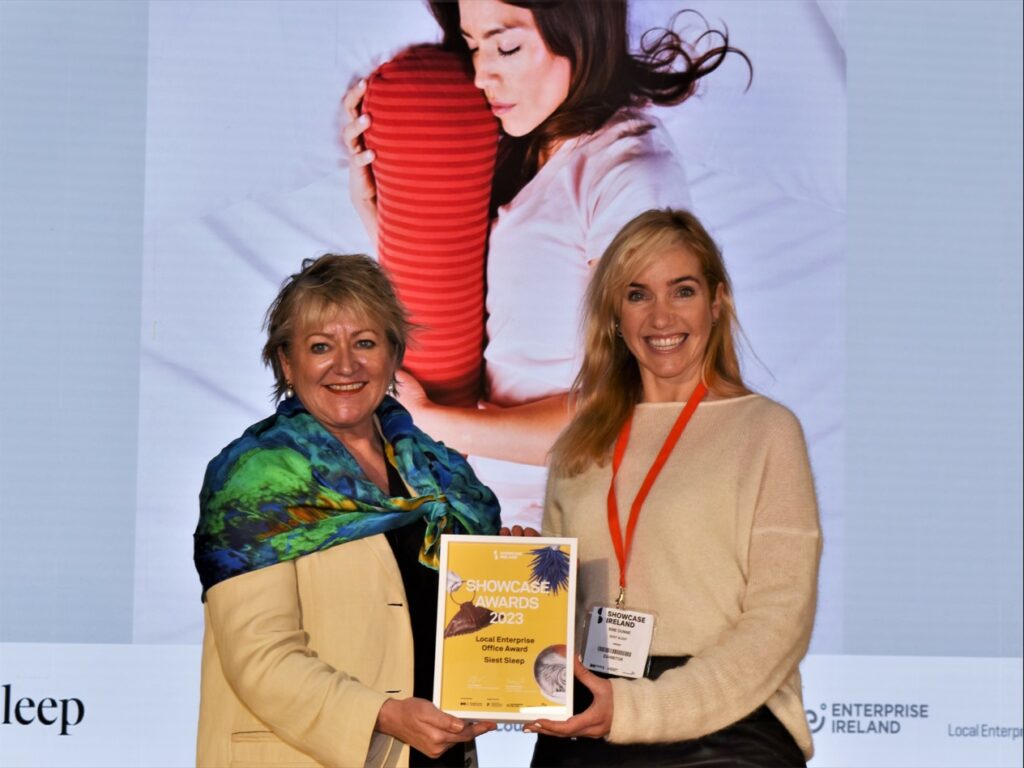 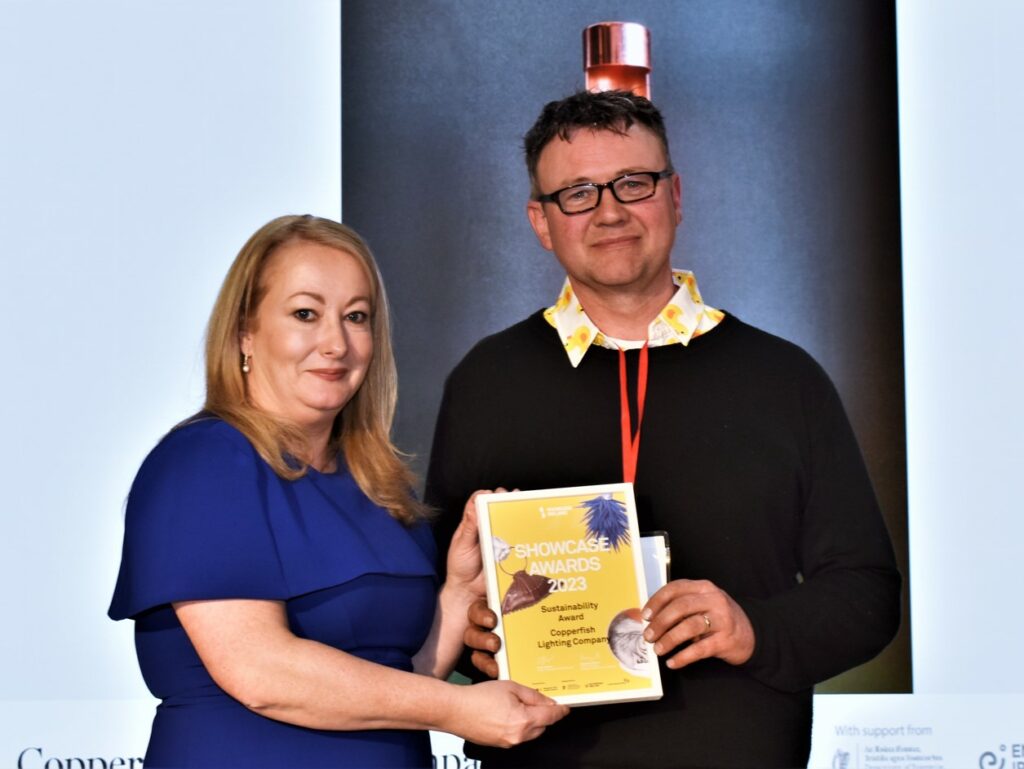 Showcase 2023 Best Product winners chosen from among nine categories were Linda Wilson Knitwear for Fashion and the DCCI Design Ireland Award, Jerpoint Glass Studio for Home, Snugi Babóg Knitwear for Gift, Garrett Mallon for Jewellery and Craft Around the Clock for Wellness. The local enterprise Showcase Award was won by Siest Sleep, and the Sustainability was presented to Copperfish Lighting Company. 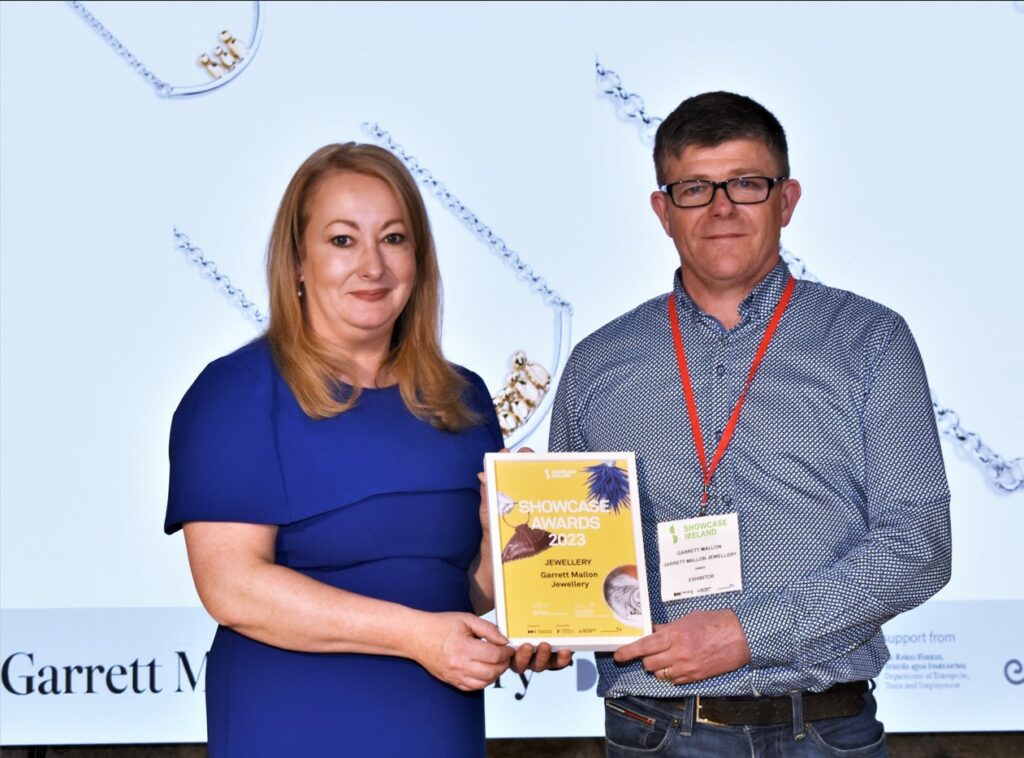 Garrett Mallon of Garrett Mallon Jerwellery earned the Jewellery award at Showcase Ireland, presented by Rosemary Steen of the DCCI 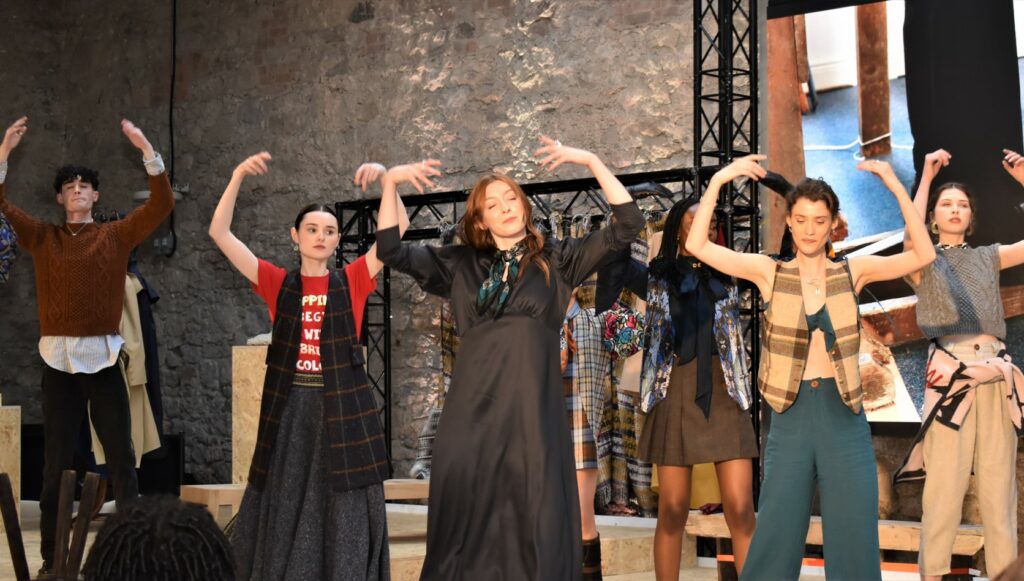 Showcase Ireland 2023 celebrated ‘The Dancehall’, highlighting the vibrancy of Irish fashion and design. Watch some of the video here at Pynck.com

Showcase Ireland followed the theme of ‘The Dancehall’ in a fusion of modern and traditional dance presented around a vibrant celebration of Irish fashion and design.