Makeup and the Mask. It’s About the Eyes.

Some pros share their tips for doing your makeup while masking. 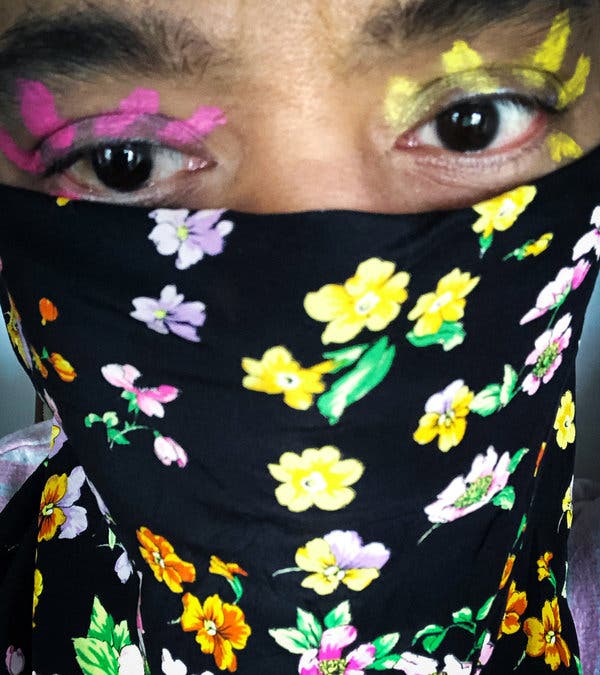 The makeup artist Nick Barose imagines women in masks experimenting with looks “that are a little weird because they’re not as exposed.”Credit…via Nick Barose

Months ago, in the early stages of the pandemic, he saw very little makeup when he ran out on the occasional errand. Lately, though, he has noticed that the faces are changing, slowly. Masks are plentiful, as are filled-in brows and lashes coated in mascara.

“So many people are doing this,” Mr. Moore said. “It’s fun to get dressed and get cute, even if it’s just to get groceries.”

Dismissing makeup as frivolity would be easier than ever now. Our professional and social lives are scaled down, and we’ve withdrawn inside. Collectively we’ve gone back to basics, and makeup is plainly nonessential. But it is also a cultural artifact, reflecting the aesthetics and ethos of the era. What will our faces show as we live through months or years of the pandemic?

Nick Barose, a makeup artist, looked back and found makeup’s future. At the beginning of his lockdown in March, he organized his Brooklyn apartment “to make it more homey, since I’d actually be home,” he said.

That’s when he discovered reference materials — books, images, magazine tear sheets — he had used as he learned to do makeup. He was drawn to avant-garde beauty editorials of the 1980s, with images of Old Hollywood stars like Marilyn Monroe. The nostalgia boosted his mood.

“You can listen to ’80s music, put on ’80s makeup and fantasize about a life that’s not yours,” Mr. Barose said.

Makeup, he predicts, will take two distinct courses as the pandemic plays out. The first will be practical and edited, emphasizing long-wear products and natural brows and lashes. But for some, makeup will be an escape.

“Our reality is so uncertain that I can see people getting experimental,” he said. “It’s a scary time, so it’s a time when you want to dream more, too.” 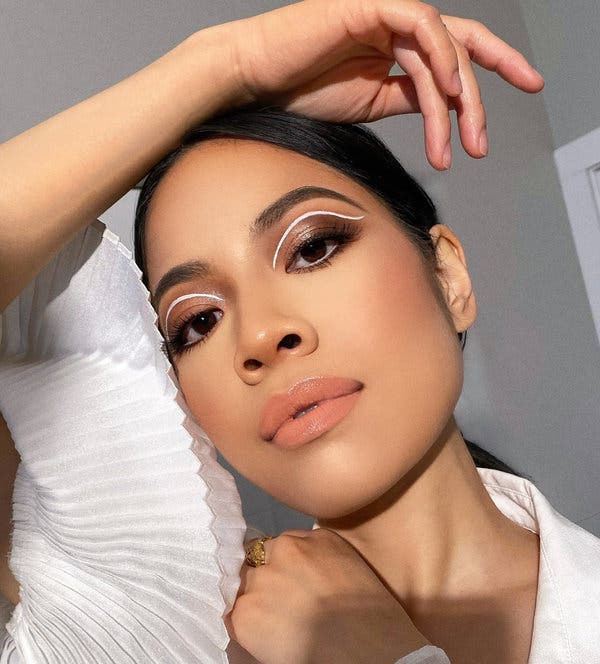 Basics of the new face by the makeup artist Keita Moore.Credit…via Keita Moore 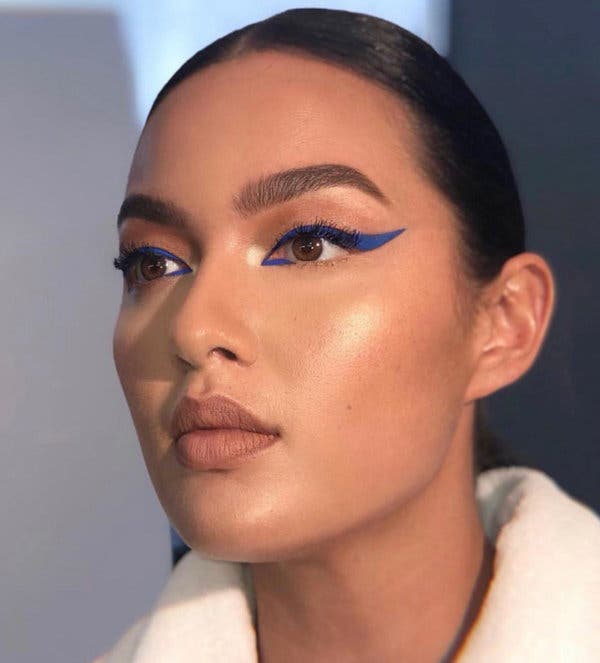 Because much of the face is covered, foundation should be used sparingly, if at all. Instead, blend concealer under the eyes and on any uneven spots above the nose. If you use foundation, a light application on the exposed areas is all you need.

“Most women choose foundation for the look,” said Keanda Snagg, a makeup artist, meaning that they’re going for color match and finish and are usually not as concerned about performance. Now is the time to consider a formula’s staying power, too. Ms. Snagg suggests Fenty Pro Filt’r Hydrating Longwear Foundation, $35.

Mr. Moore swears by Premiere Products Blue Marble Selr Spray, $14, a cult favorite setting spray, to keep makeup in place. “A lot of drag queens use it when they perform onstage,” he said. “It makes your makeup absolutely transfer-proof. You could lie down on a pillow and there’d be no foundation on it after you got up.”

Erin Parsons, another makeup artist, predicts that foundation formulas will evolve to focus on skin care. “Masks will shift how we think about foundation,” Ms. Parsons said. “When you take them off, your skin is irritated and red. I keep thinking the next generation of foundation will be soothing and protecting.”

The new basic face is filled-in brows and amplified lashes. “If there’s one thing we should learn now, it’s how to properly fill in your brows,” Mr. Moore said. Eyebrow pencils give users more control of color density (and most people go too dark on brows), so he prefers them to powders, which can be blotchy.

“People tend to fill in too much at the inner part of the brows,” he said. “Focus on the tail because that’s where most brows are sparse. Brush your brows up and outward and fill in only where you need more hair.”

Pick a pencil with an angled flat tip, like the Lip Bar Hi-Brow Gel + Pencil, $14. This shape helps you mimic the look and direction of hair growth.

The Lashify at-home lash extension kit, $145, creates a lash look that’s a step up from a coat of mascara. The system contains individual lashes, so your result is customizable. “You can just add a couple lashes to the outer end of your lashes for more drama,” Mr. Moore said. 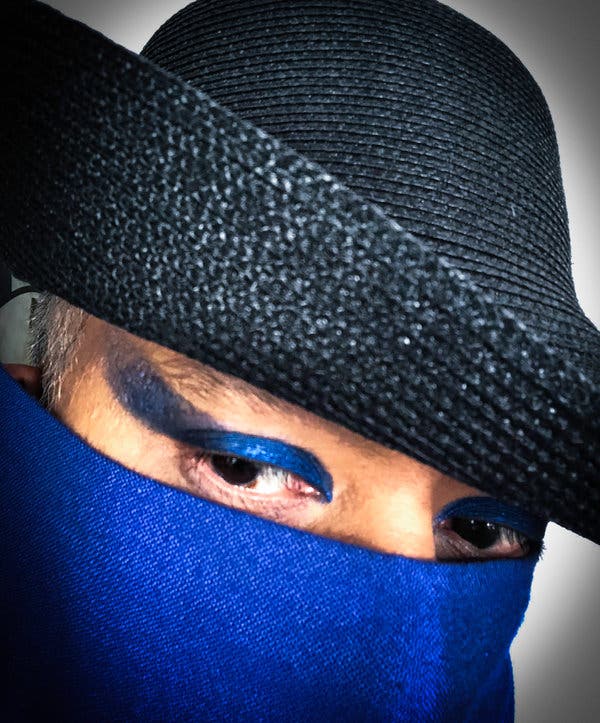 As our time in masks wears on, makeup artists expect we’ll transition to eye makeup that’s simple yet expressive. Eyeliner is the best tool for these times because it’s uncomplicated. A bright color is interesting and fun without requiring the layering and dimension of eye shadow.

“My favorite is winged eyeliner in any bright color — pink, blue, burgundy — anything that’s not black,” Ms. Snagg said. She likes NYX Epic Wear Liquid Liner, $10, a waterproof formula. (“You could jump in a pool and it wouldn’t budge,” she said.)

An eyeliner newbie can start with a simple line along the lashes and, with practice, work up to a wing. Ms. Snagg’s winged liner technique: Draw a triangle at the outer corner of the eye. Then, using gentle strokes, create a line that connects that triangle to the inner corner of your eye.

Embrace the Freedom of Masks

During his lockdown, Mr. Barose made himself up in the style of celebrities representing different eras, like Grace Jones, Donyale Luna and Elizabeth Taylor. “Because I’m being someone else, I feel more free to do things I’ve never done,” he said. “A mask covering your face is similar. It’s a superhero effect because you’re incognito.”

If you favor subdued or minimal makeup, this can be a time to explore, to try new textures and materials. “After a period of minimal makeup, I could see a resurgence of the ‘Euphoria’ makeup — people trying things that are a little weird because they’re not as exposed,” Ms. Parsons said.

For example, earlier this year, she used a prosthetic adhesive to affix tiny dried flowers she found on Amazon to the ends of lashes. “People have been asking me about it all the time,” she said. “It’s so easy to do. It’s cute, and it makes you happy.”