Something Ventured, Something Gained: A Journey into the Heart of the Great Karoo 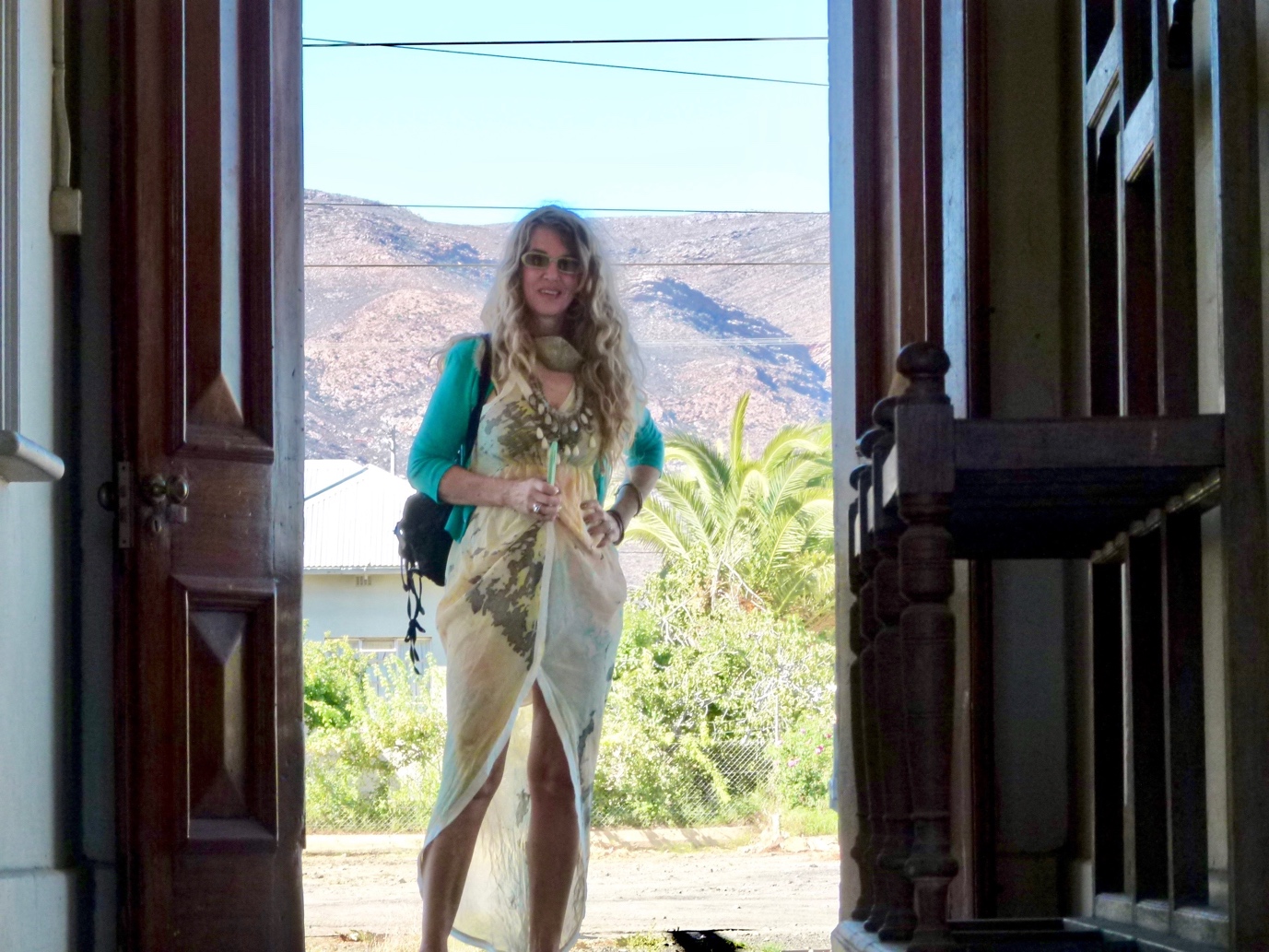 The platform at the dusty train station at Matjiesfontein. Founded in 1884 by energetic railway enthusiast and Scotsman James Douglas Logan. 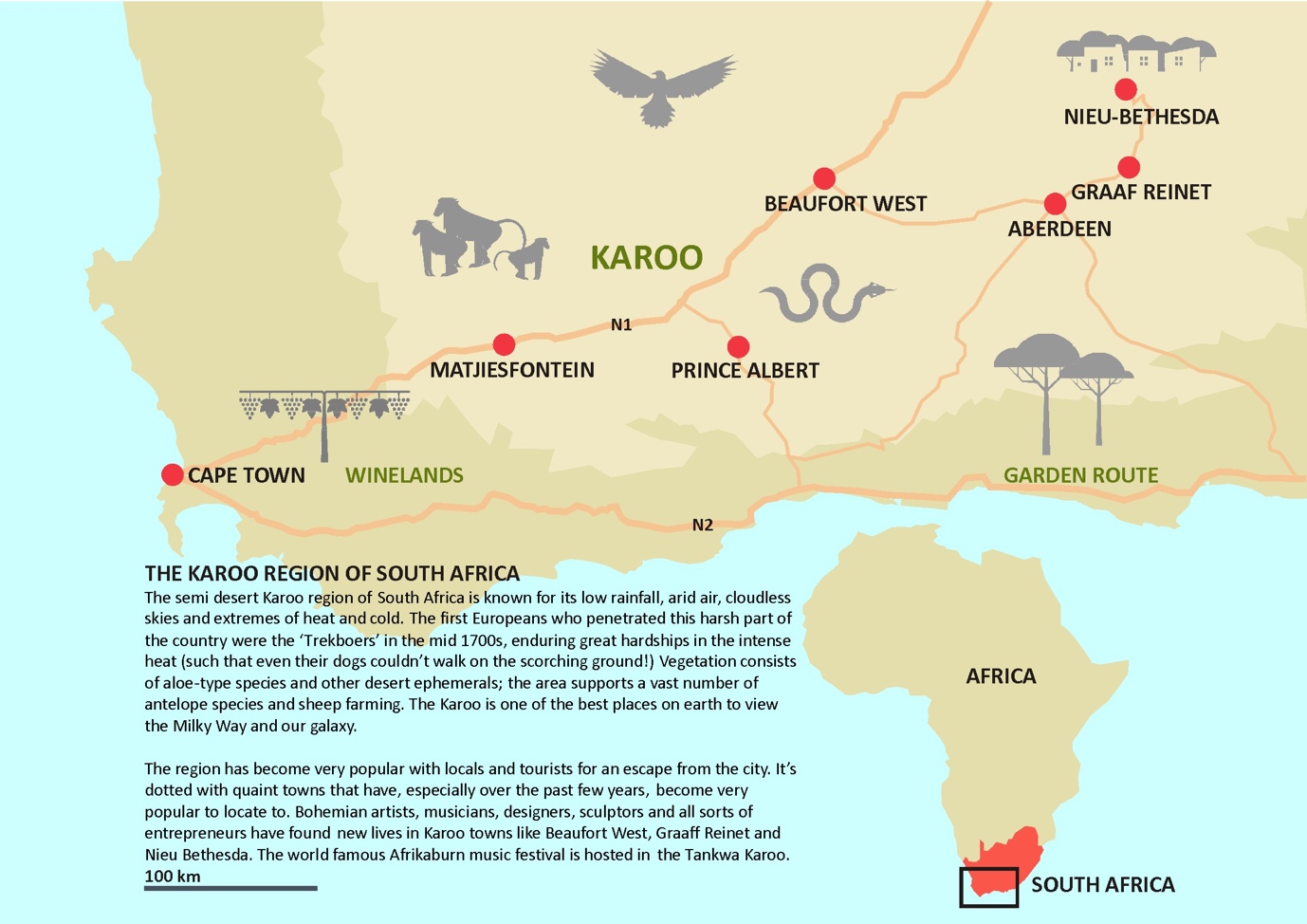 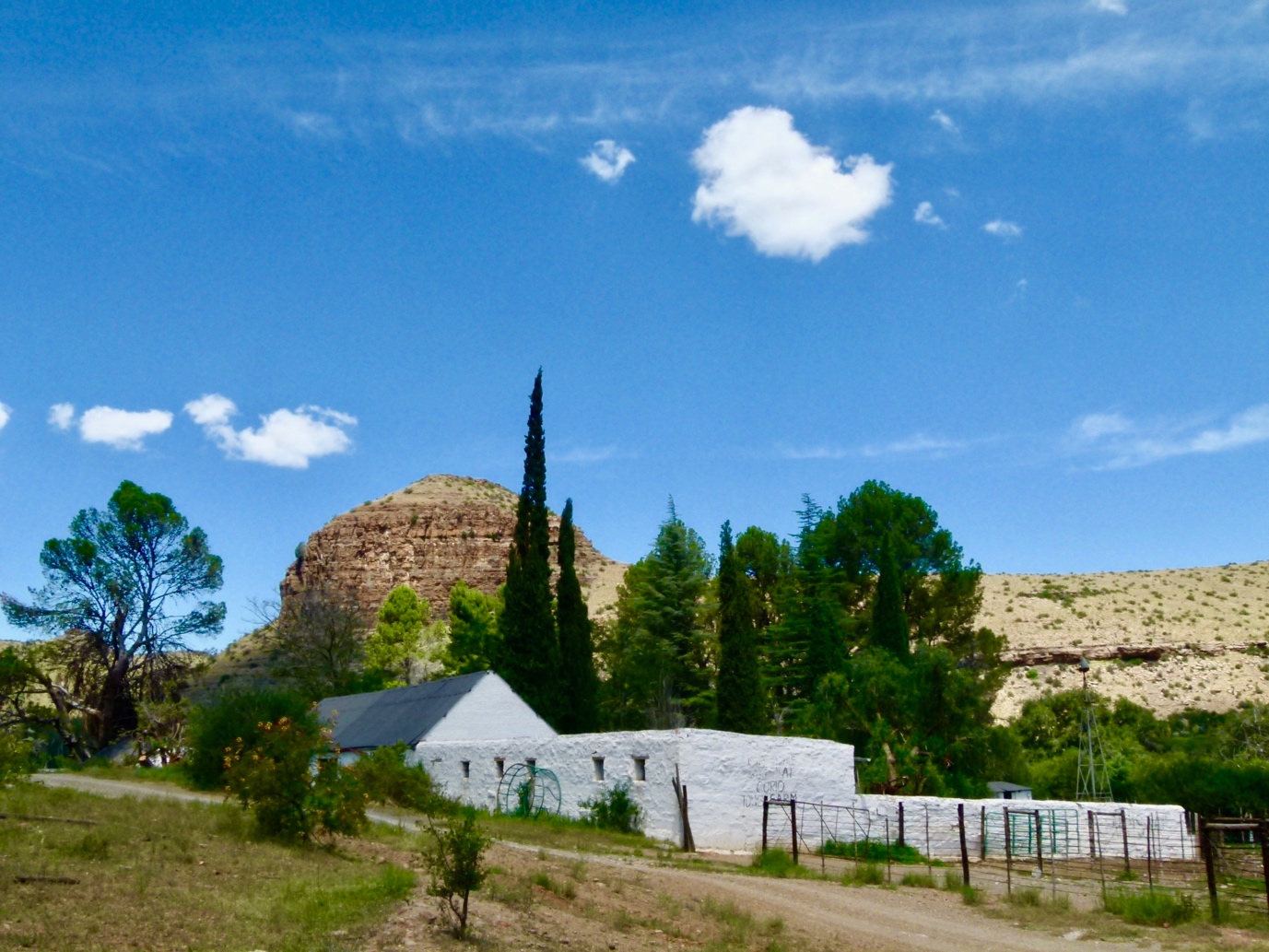 The rock (De Toren / The Tower) that heralds the entrance to Nieu Bethesda. 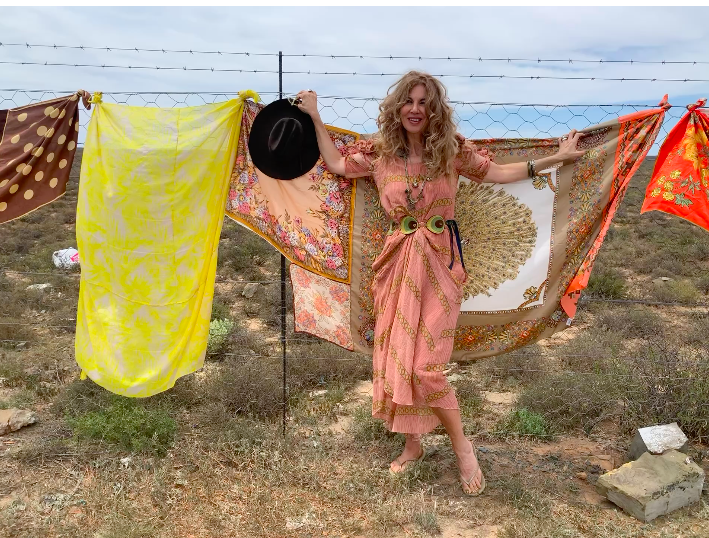 Setting up for a photoshoot in the desert.

We set off on a mission to capture the elusive essence of the Karoo, not altogether sure what we’re hoping to find but knowing that we’ll return with something, like one always does after a long and impetuous road trip. We loosely had a few photographic and artistic missions in mind, but as is characteristic of us both we didn’t want to plan things out too much in advance.

Our car is small and ancient, it drinks equal amounts of oil and gas. The aircon has never been fixed but that turned out to be an unexpected gift from the Karoo gods, even in the sticky 40 degrees Celsius heat (bliss, to keep the windows rolled down and let the outside in, wind in your hair!) 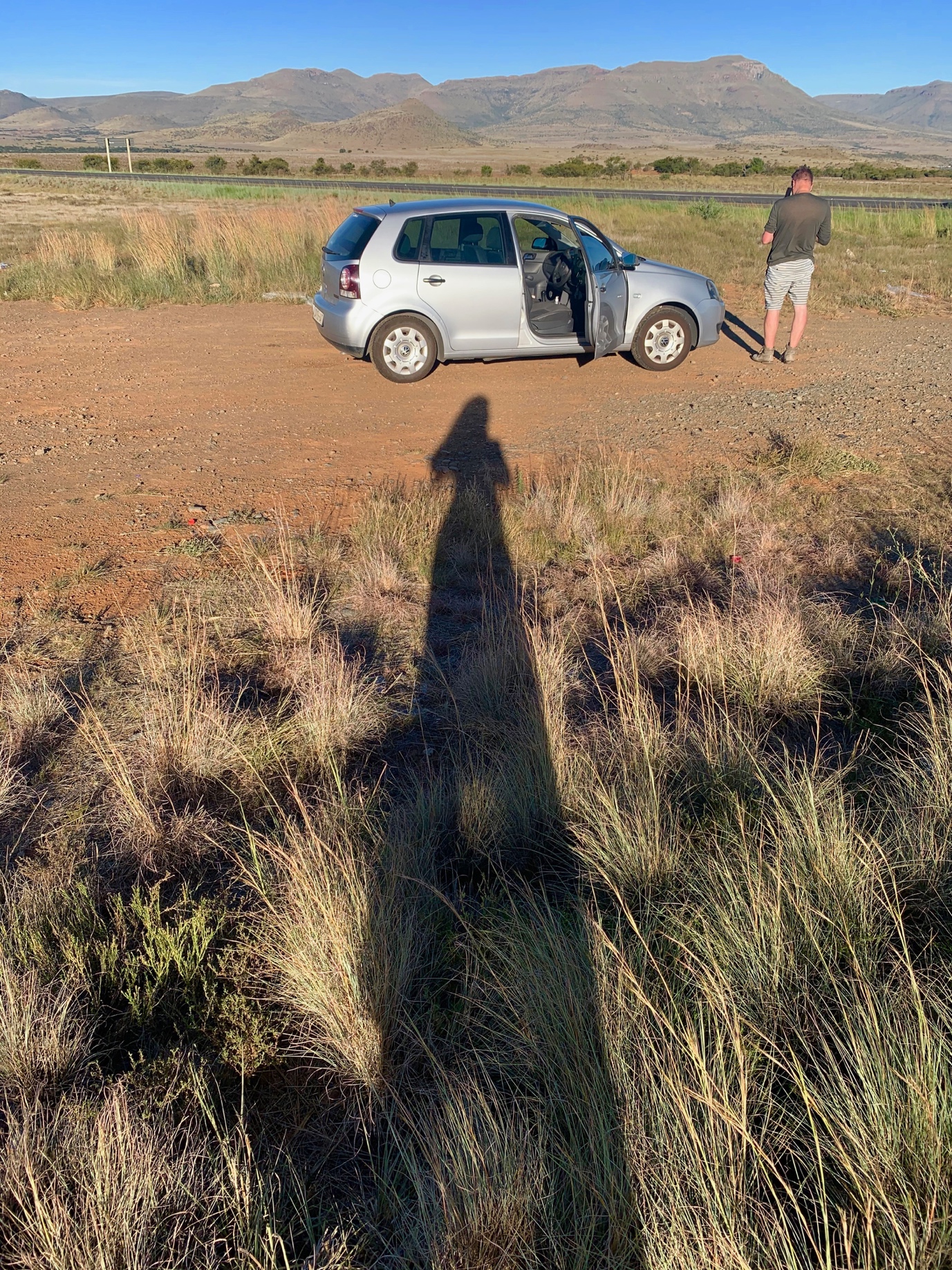 Our car exceeded all expectations by completing the 1500km journey!

We hammered down the motorway, watched the green Cape Winelands give way to a much more arid landscape. Blue pointy mountains became black rocky ones, the desert was encroaching! Matjiesfontein was our first coffee stop – a dusty one-horse town, prim and proper, polished and proud of its former (1899) glory. Its most prized Victorian gem sitting with royal aplomb bang in the heart of a dusty high street, grand old trellised verandah & all: The Lord Milner Hotel, complete with Russian green interior and red carpet (for everyone making it to this outlier of a town is a VIP). As we – the only visitors (we thought) on a Tuesday morning, arrived, a film crew made a dramatic crash landing in a helicopter that kicked up so much dust my camera’s shutter choked up. (Think Apocalypse now, but not in the tropics.) 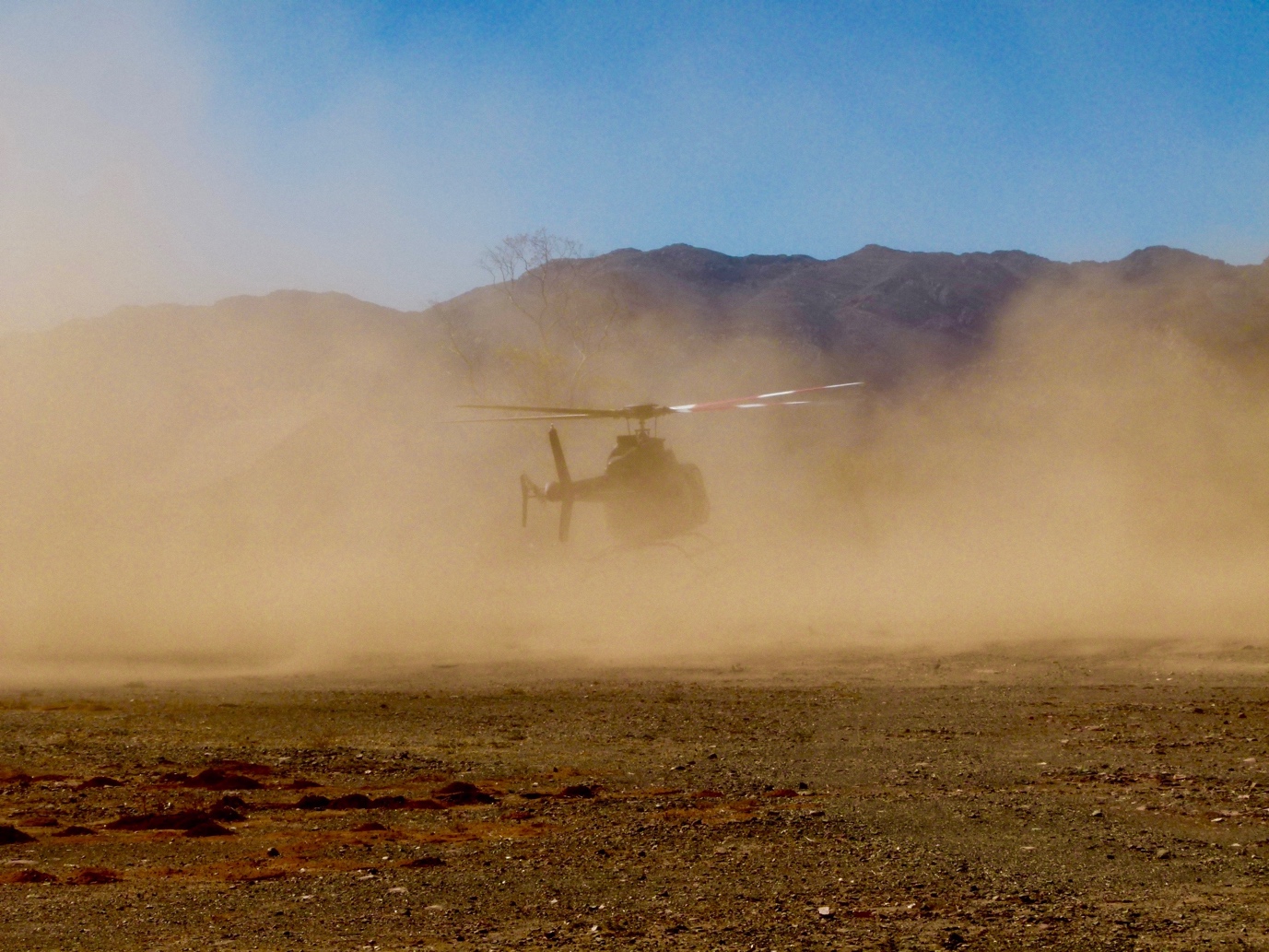 A film crew crashed onto the Matjiesfontein scene. 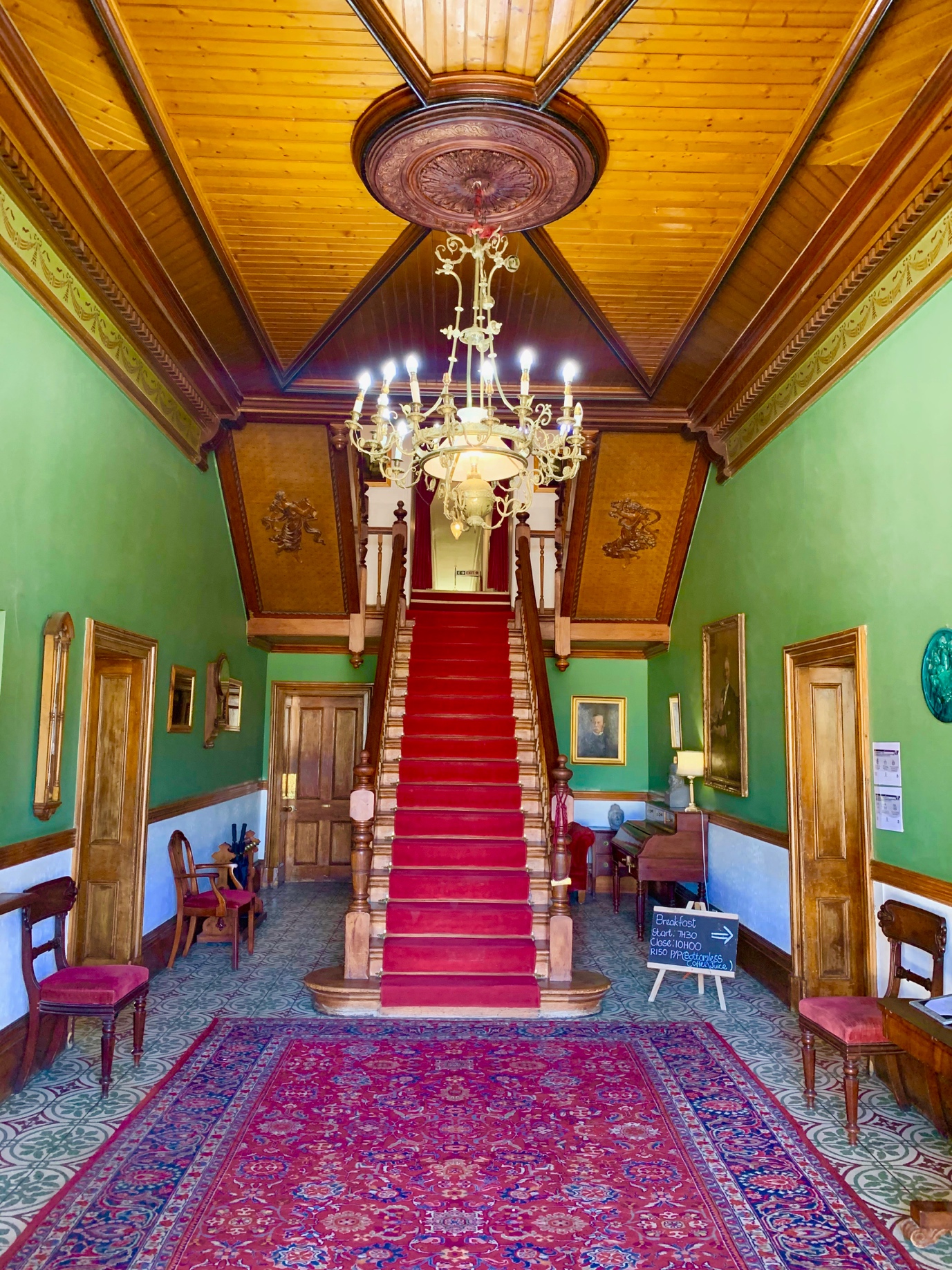 The Russian green interior of the stately Lord Milner Hotel, Matjiesfontein, as if in a time warp. 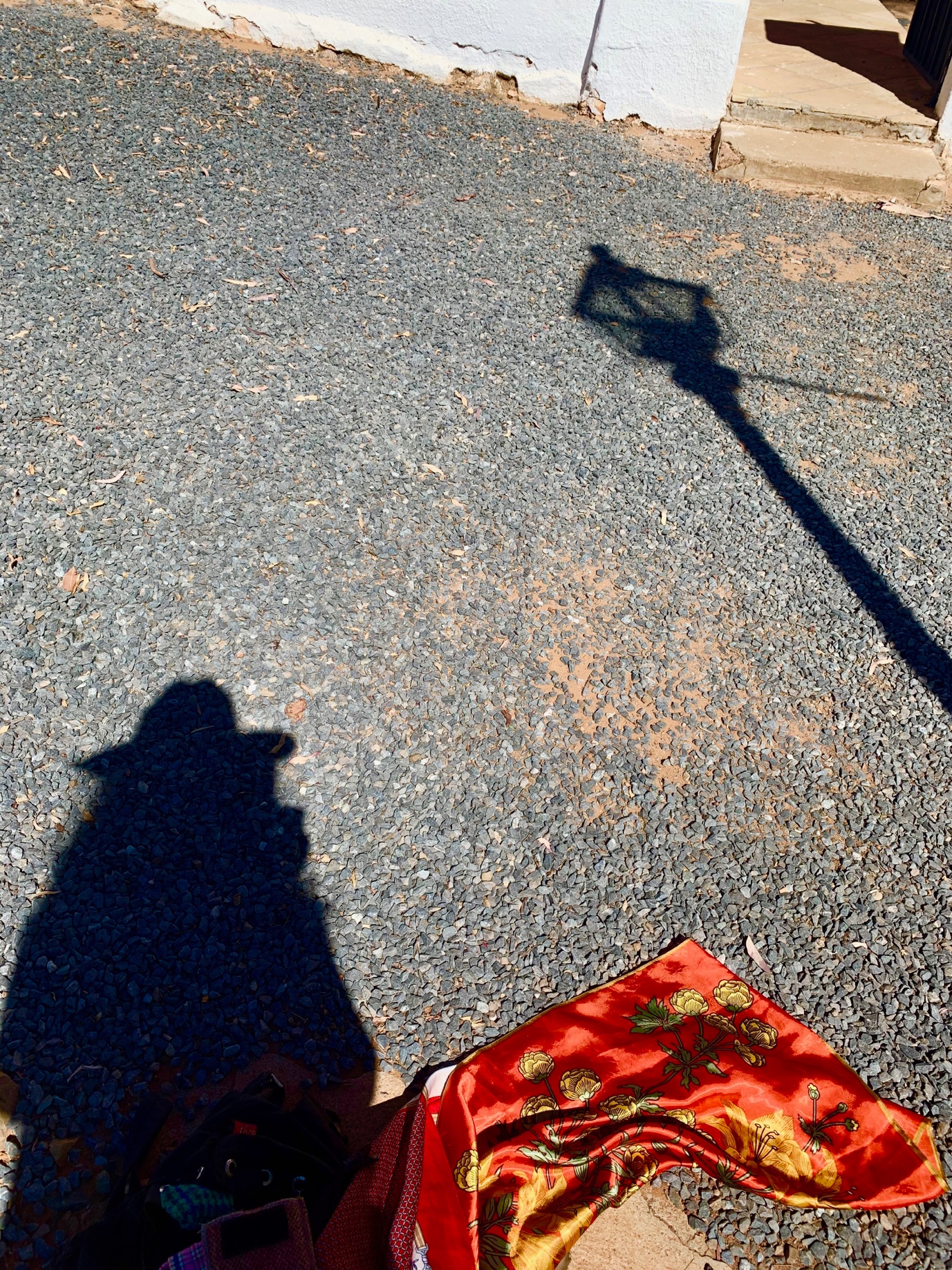 Stetson and scarf. 40 Degrees in the shade. 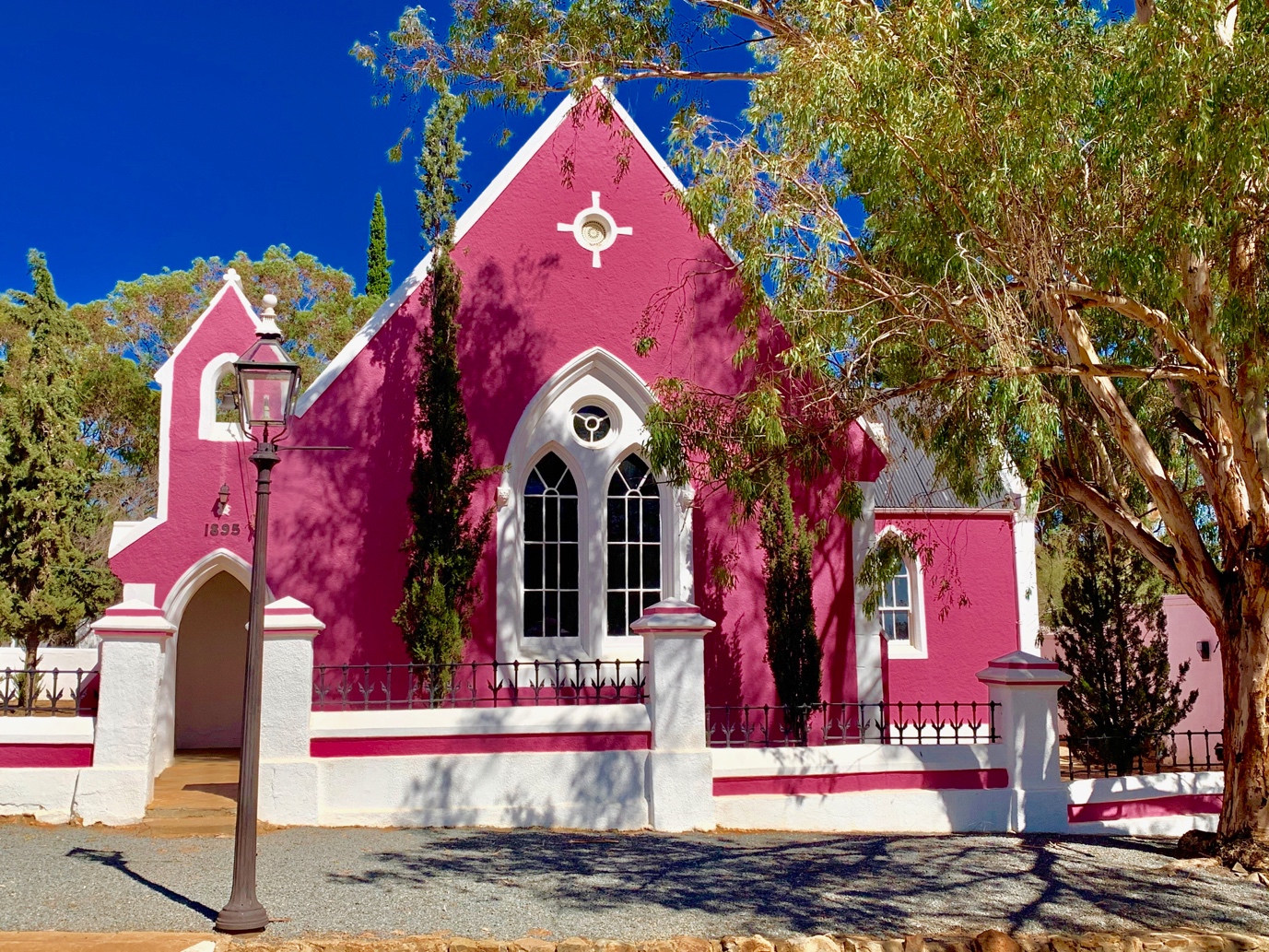 A Schiaparelli pink place of worship, Matjiesfontein, perched on a dusty pavement.

We had lattes and promptly pushed on, the trip ahead was long, the temperature rising. Our route took us through Beaufort West, an industrial farm town in the middle of nowhere. We found a supermarket sandwich and a shady spot to eat it. (The shady spot was harder to find than the sandwich.)

Onwards, northwards, navigating ever closer to that spiritual mecca, our end destination – the mission town of Nieu Bethesda. But first Aberdeen (imagine my Scottish husband’s fascination with an Aberdeen in the desert) and Graaff Reinet, a civilized oasis filled with its predictable quota of quaint art galleries, Karoo lamb and the Drostdy Hotel, a local watering hole of note. Lager, lager, bring it on, nobody’s counting in the Wild West! We stocked up on barbeque essentials and ice (to cool down the Rock Rabbit canned wine we brought with us). 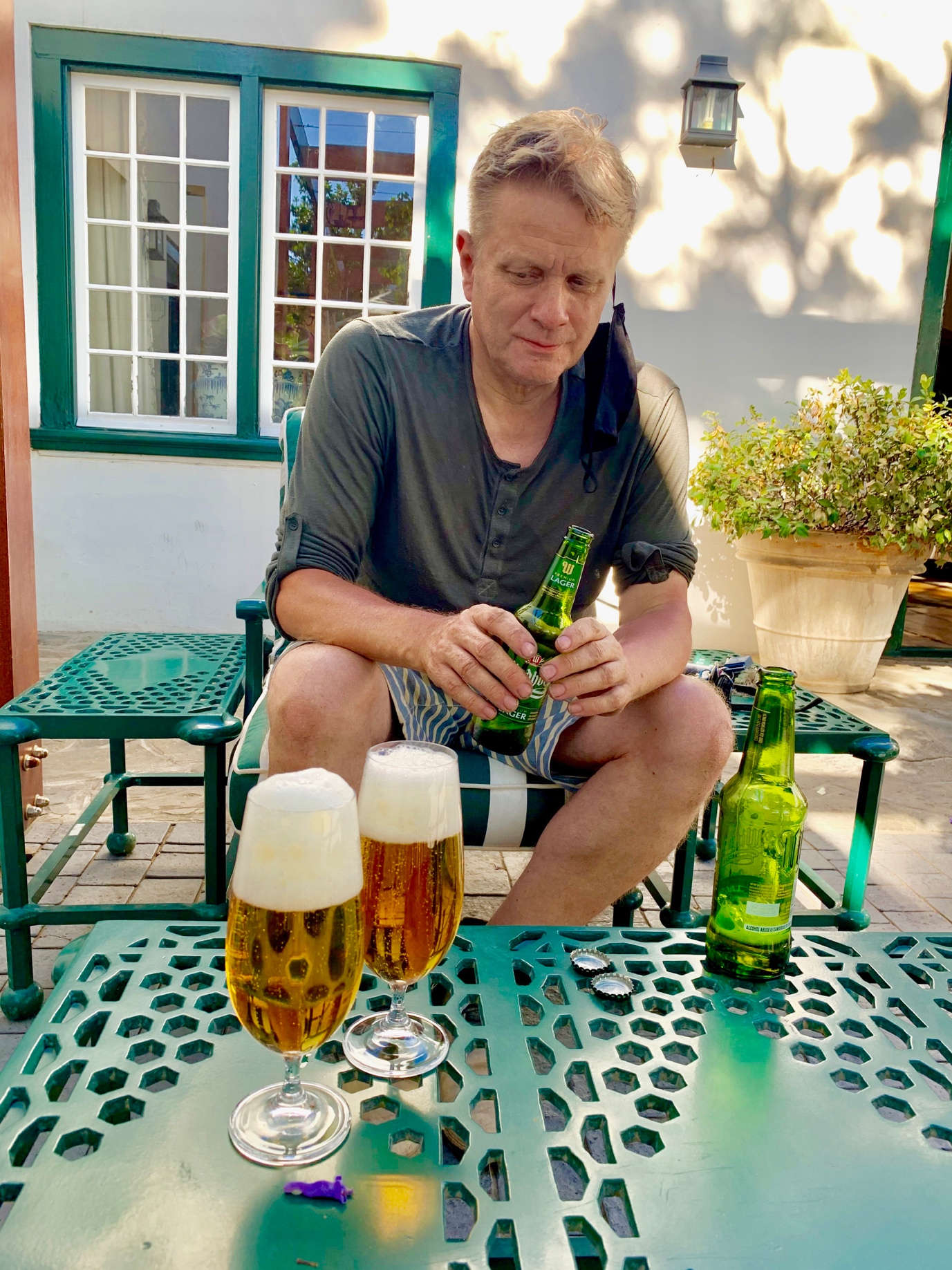 Brian meditating on a couple of lagers, The Drostdy Hotel Graaff Reinet.

The sun was low when we approached Nieu Bethesda (a biblical name that translates loosely to ‘place of flowing water’). The signpost said Welcome to the Owl Route. The long grass on the side of the road was lime green, or perhaps somewhere between lime and spring – certainly the most uncanny shade of verdigris. (We soon learnt that nothing is particularly straightforward in these Karoo regions.) Rolling hills and off-white Karoo sheep. Wind pumps & farm dams with fertile little offspring oases in tow. Dust devils in the distance. 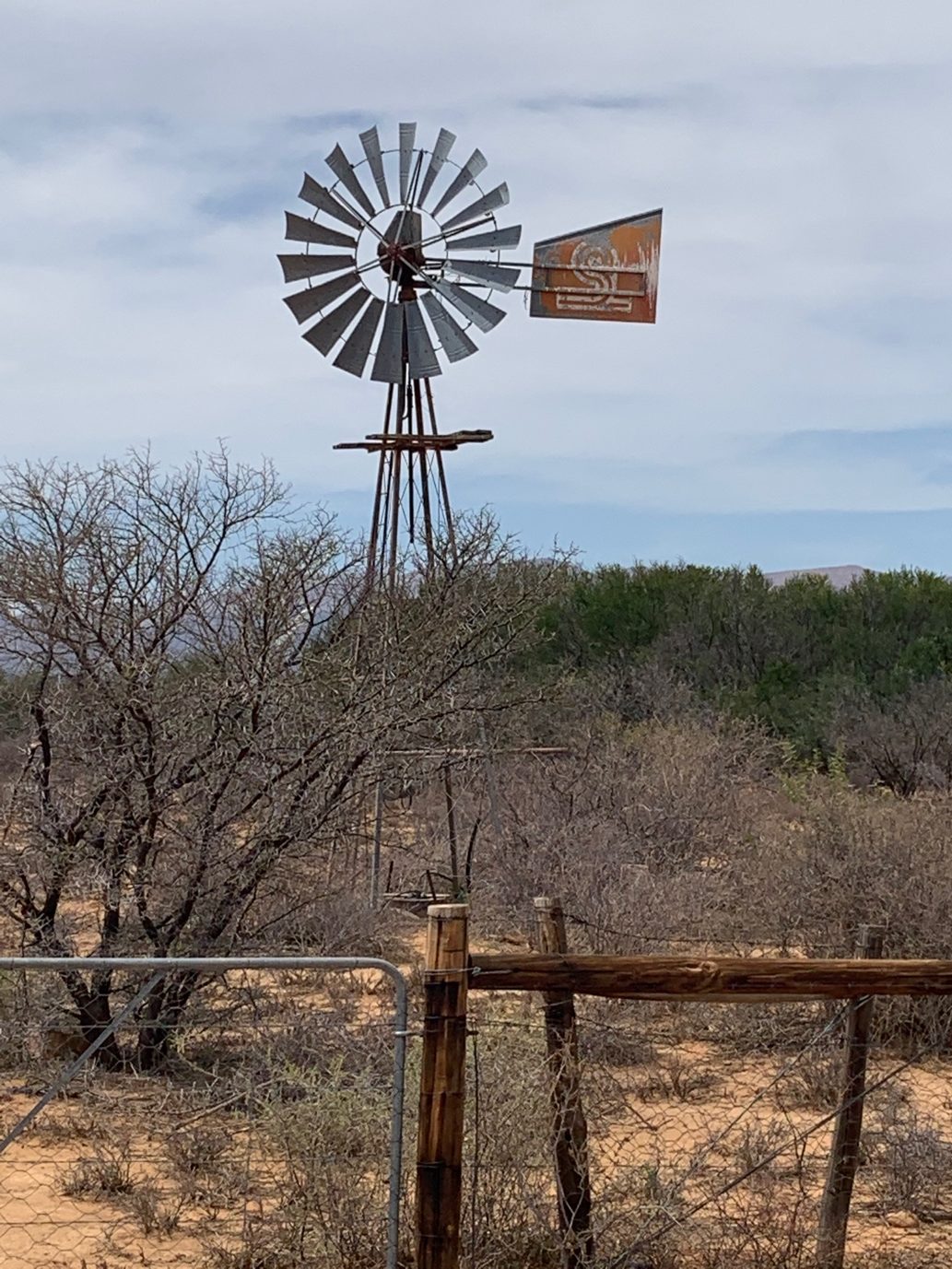 Then, as if in Middle Earth (mind you, we were close to the centre of the country) a most peculiar hillock – a huge, pointy well risen muffin / bundt cake guarding over a lush green valley heralded the entrance to Nieu Bethesda. We were to stay in a wee hoosie that belongs to a friend. No street numbers in this town – we were pointed in the direction of our abode and recognized it by the pale blue of its front door. A rotund outdoor shower with no door. Wide dusty roads, my Hawaianas covered in little devil’s thorns that kept making me do a Tuco in the cemetery scene of The Good The Bad and The Ugly. A flock of wild horses – fillies in tow – casually strode past us. The locals told us later that they belong to nobody – they’re everybody’s. 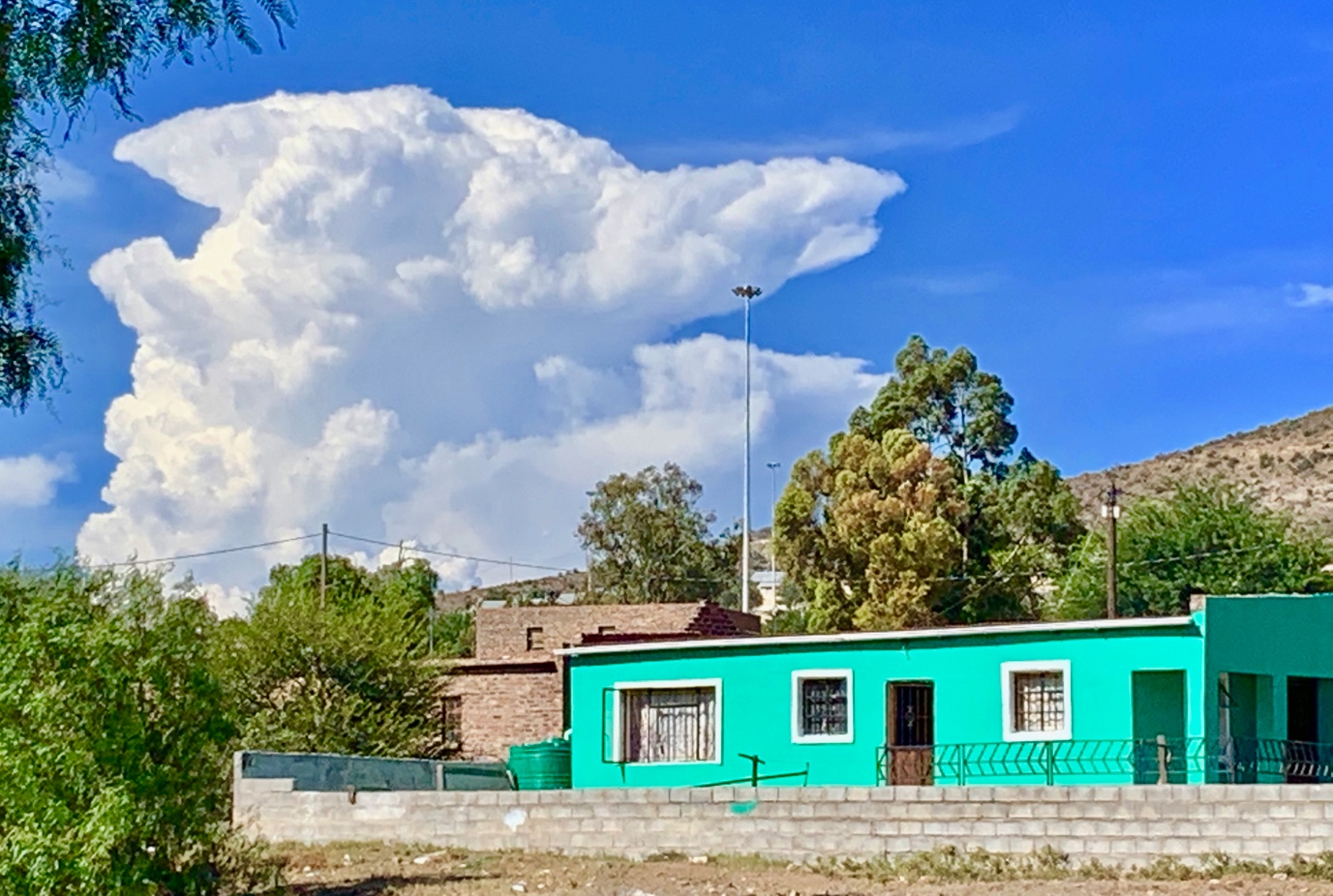 Cumulus nimbus clouds cooking up a storm. But these promises seldom deliver. 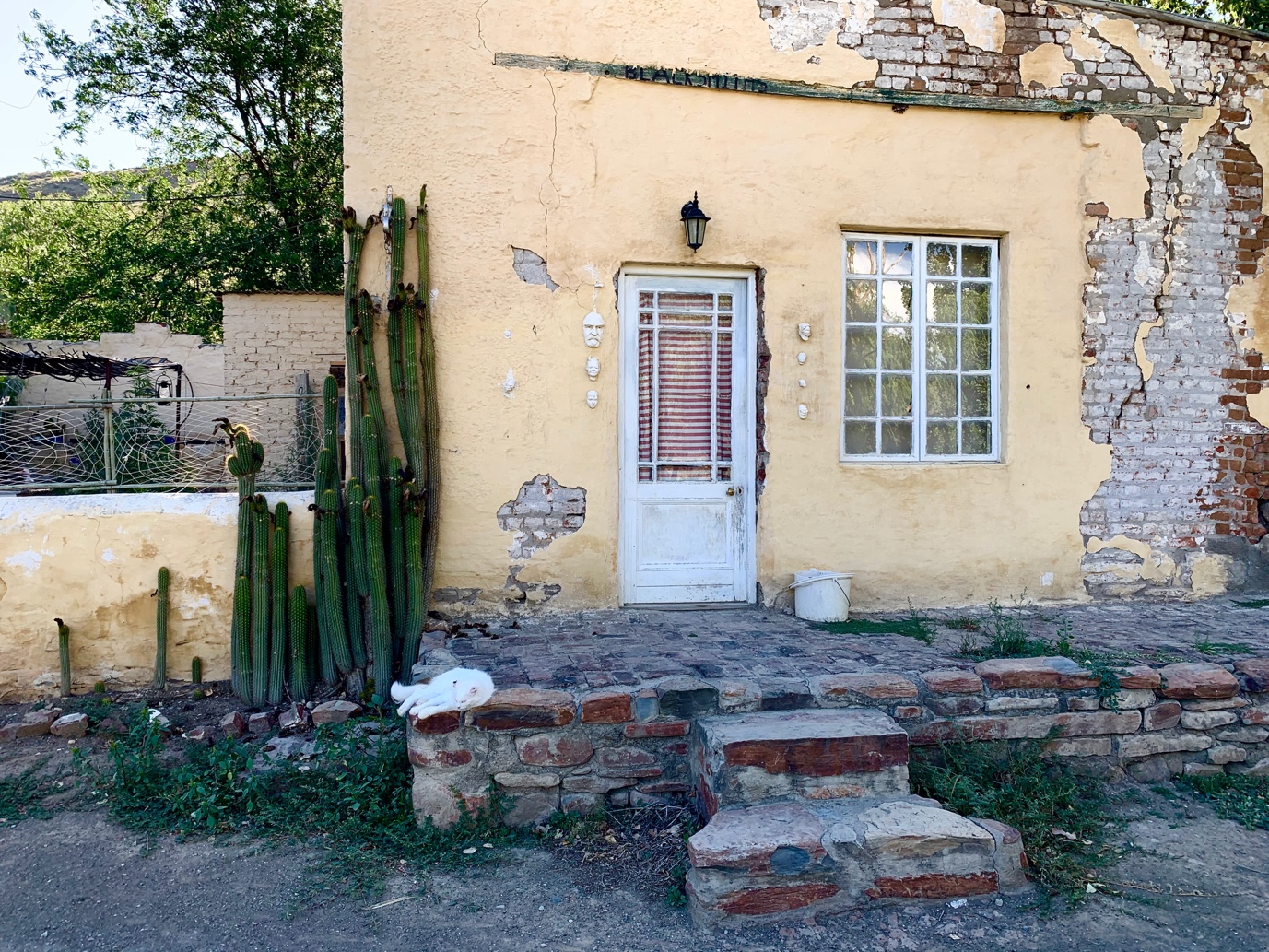 A curious mixture of civilization and untamed freedom evident in all the Karoo towns. The white pussy is Rose and she belongs to one of the local artists 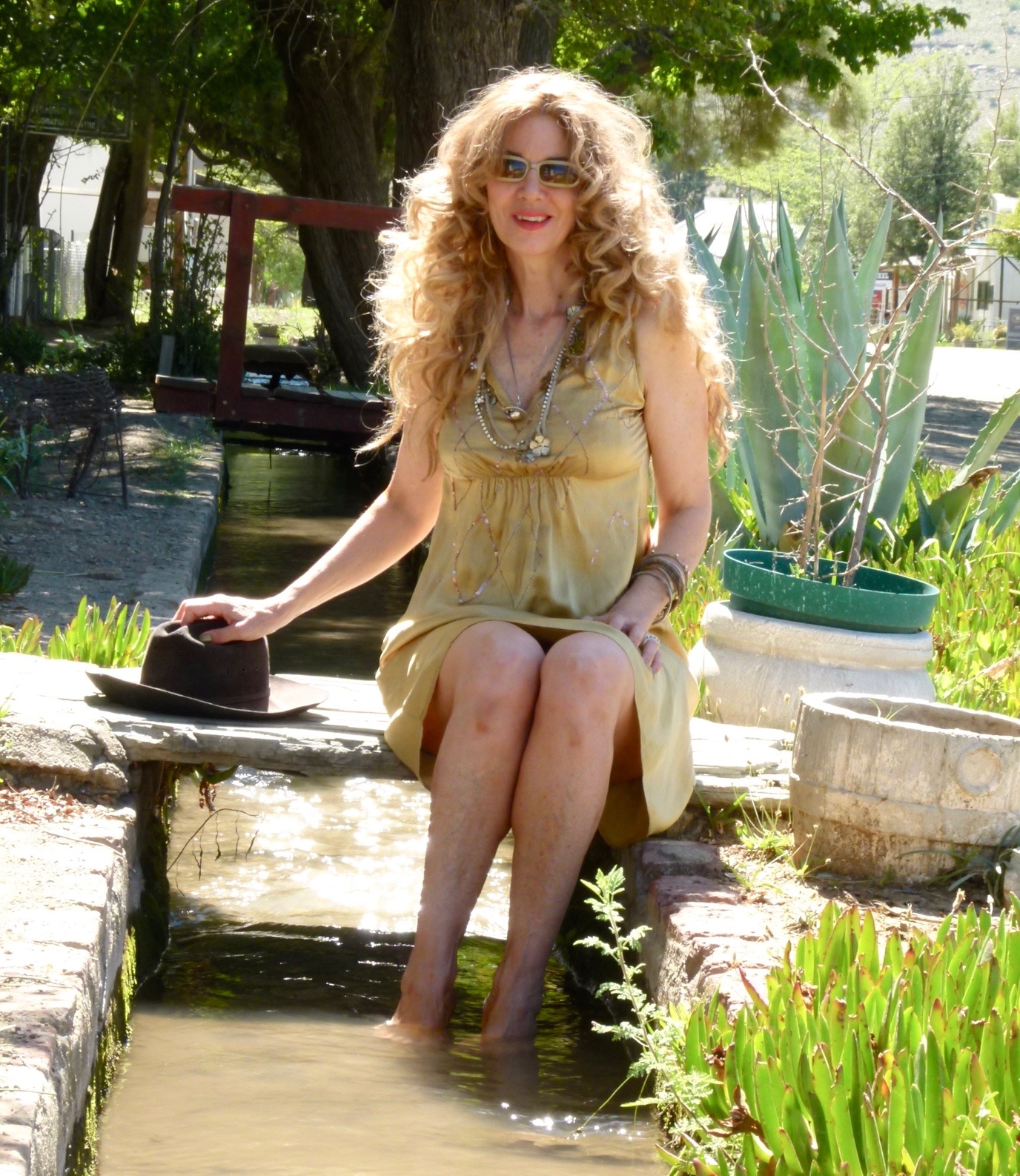 Canals offering welcome heat relief throughout Nieu Bethesda. It took self-discipline not to immerse oneself head to toe in the cool water 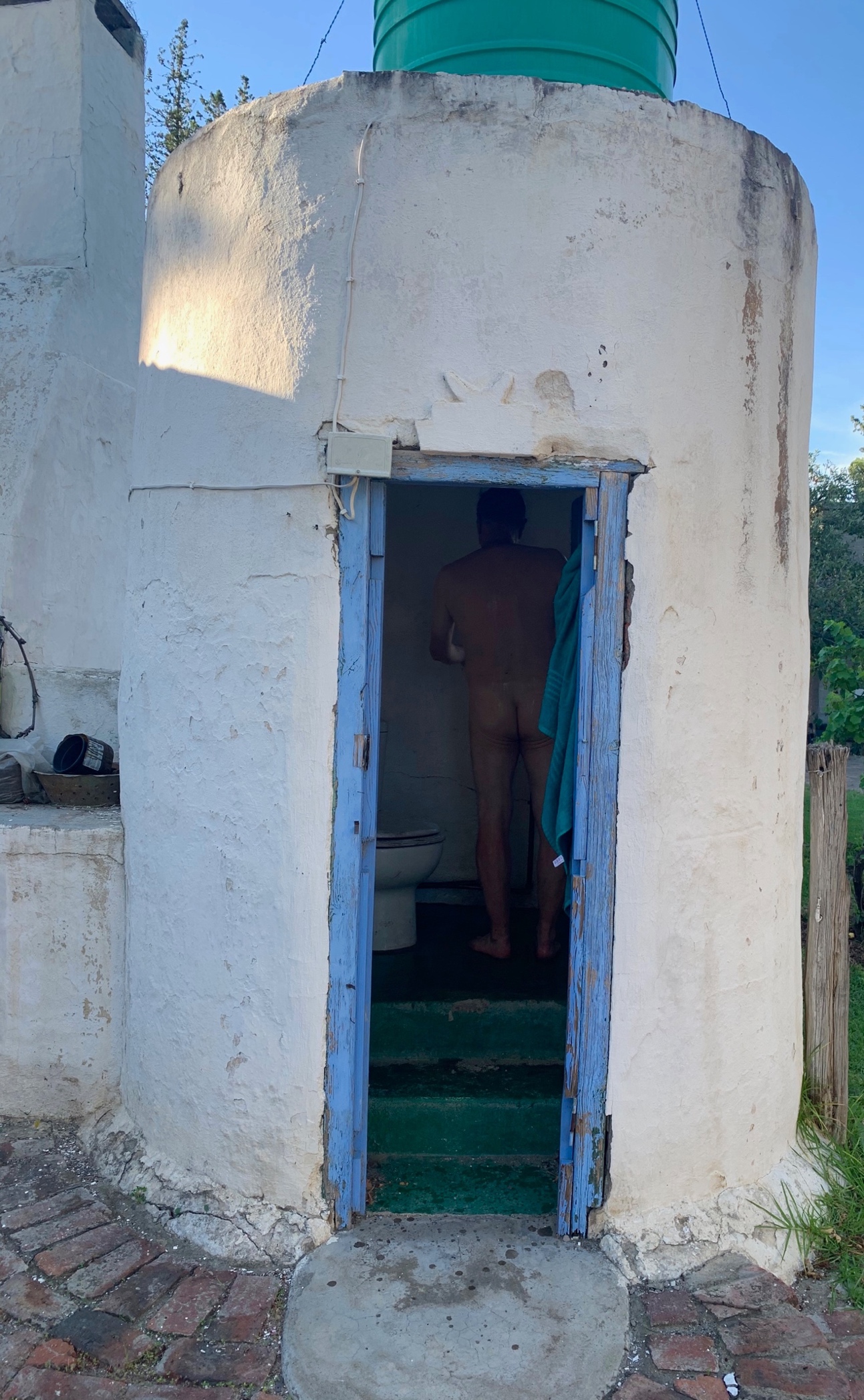 Ghost of Brian taking a shower in the rotund outdoor ablution block. 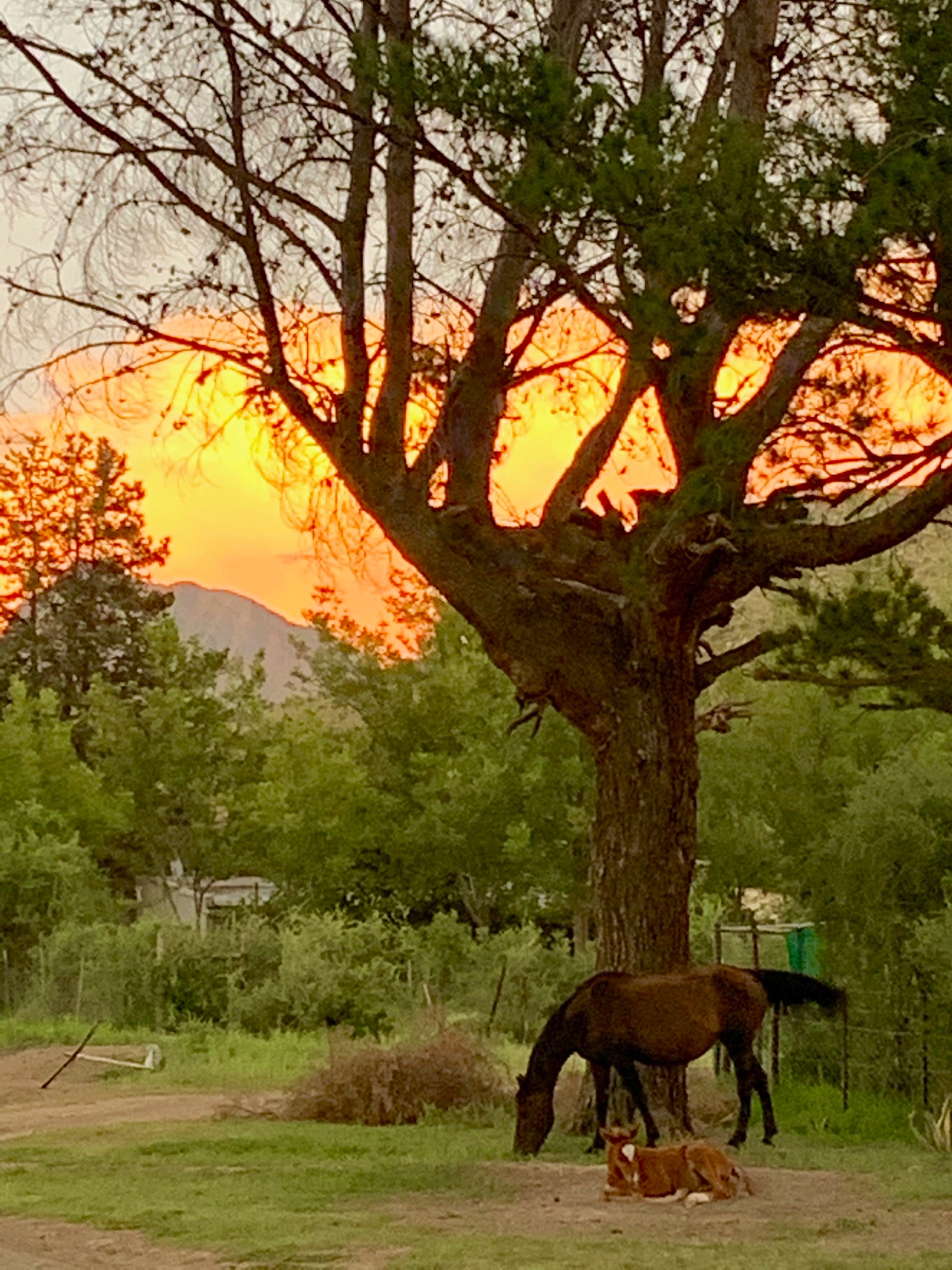 Wild horses roam the street of Nieu Bethesda before sunset (no filters!)

‘Our’ house was just off Grave Street. Our hostess had suggested a photo opportunity in the cemetery (where many of the original Trek Boers lay under a slab of slate, their names and dates engraved into the stone by hand) at the golden hour. We snapped away as the sun set like only an African sun can set – shades of cerise and amber and mauve and aubergine.

That night I experienced something I’ve never seen before, not even in the middle of the desert in my native Namibia – a sky so jet black you couldn’t see the hand in front of your face. And encrusted in this black velvet sky tens and tens of thousands of the brightest stars, in an expanse that starts to your left and ends on your right, a half circle, 180 degrees heaven. Close enough it seems you can reach out and tickle each star! The Milky Way a cloudy strip (and for the first time ever did I clock why it’s called the Milky Way!), the Southern Cross, the Three Kings – they were all there in their extraordinary twinkling, majestic splendour. 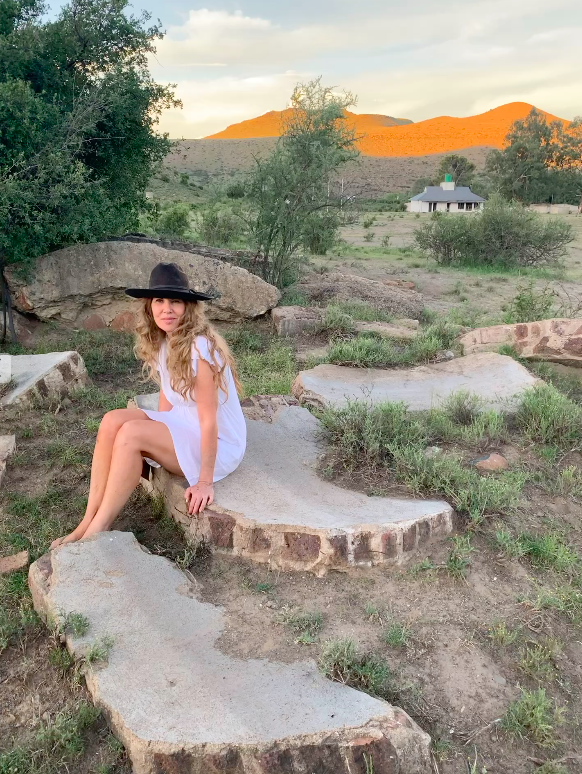 Late afternoon pyjama & Stetson stroll across the ruins of the old cricket club (aka drive-in movie theatre) of Nieu Bethesda. 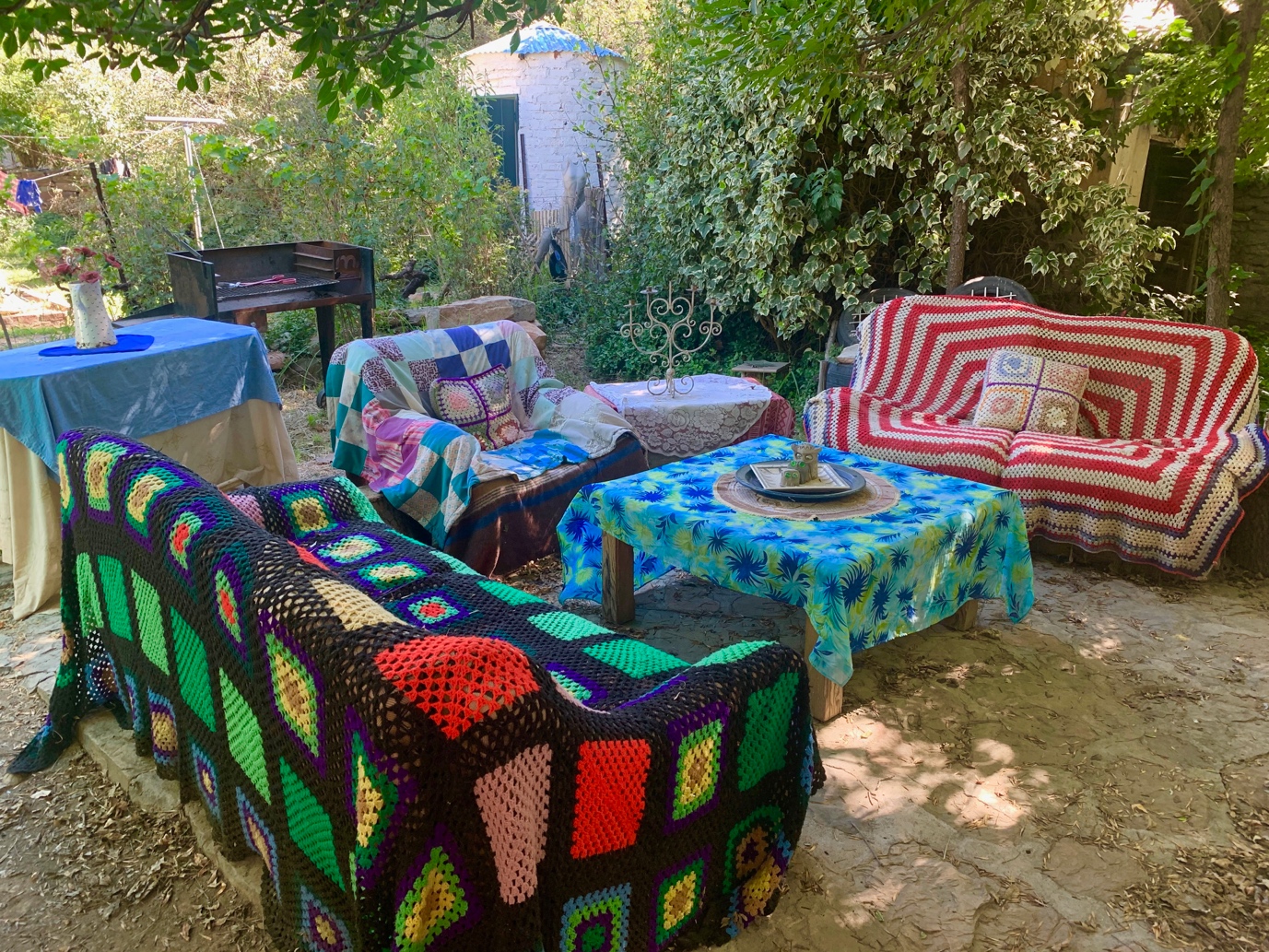 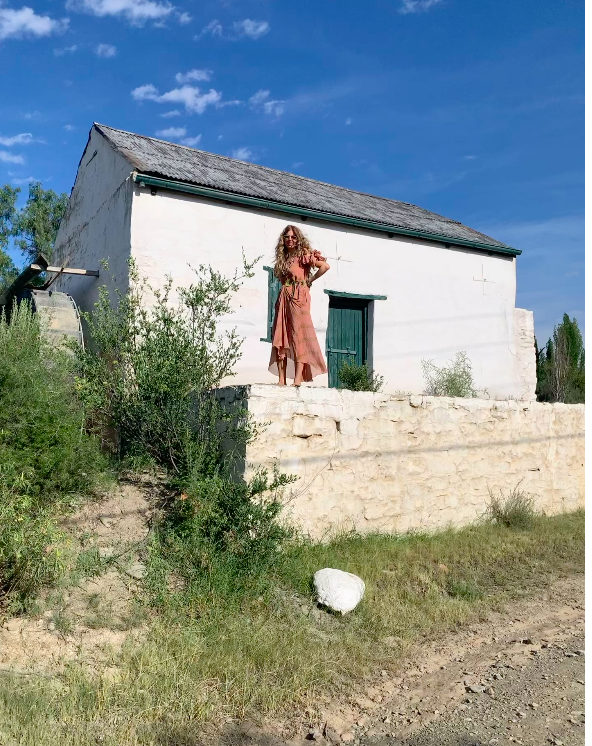 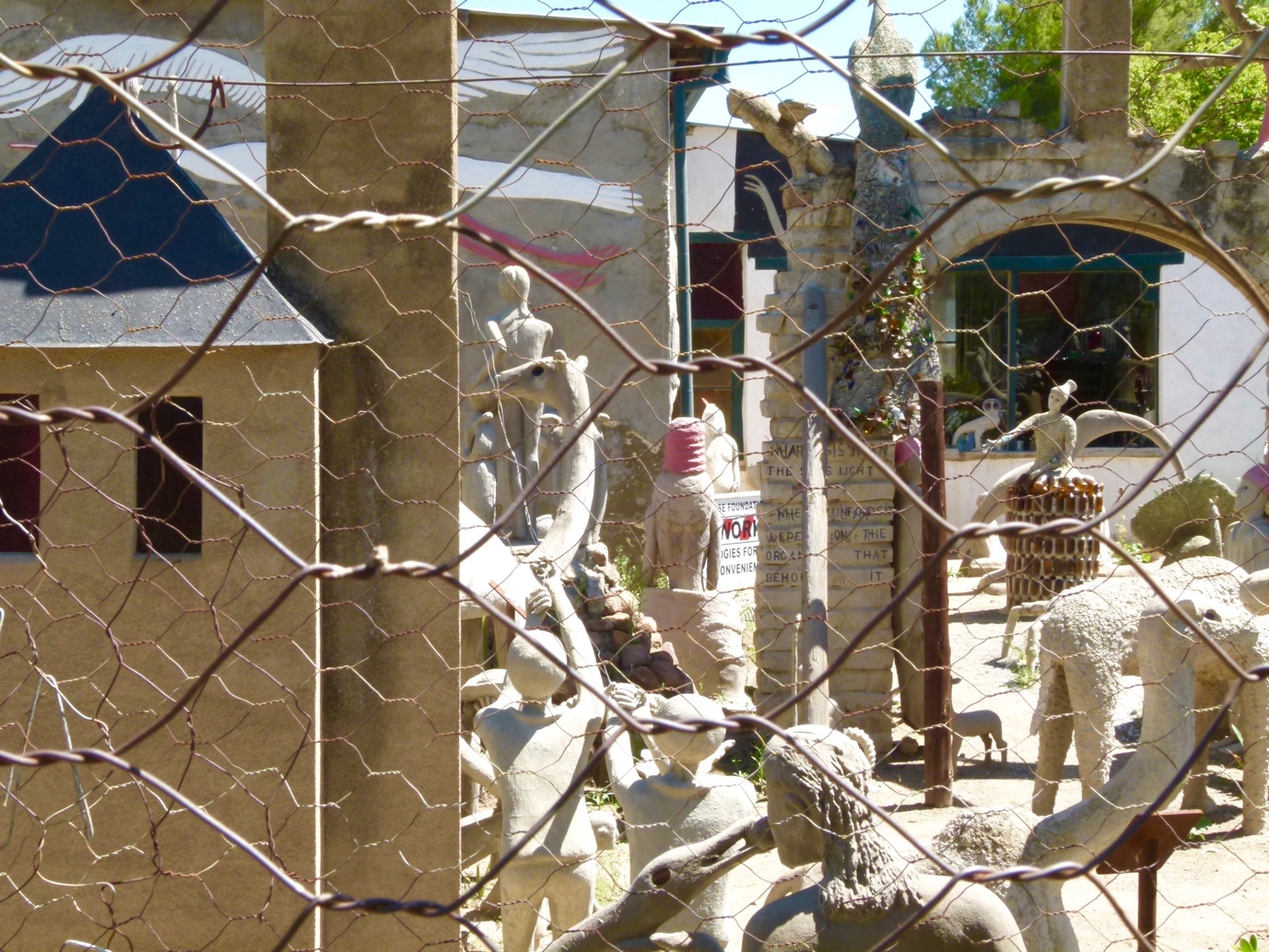 The crammed yard of the Owl House, with over 300 bizarre statues made by eccentric local Helen Martin. 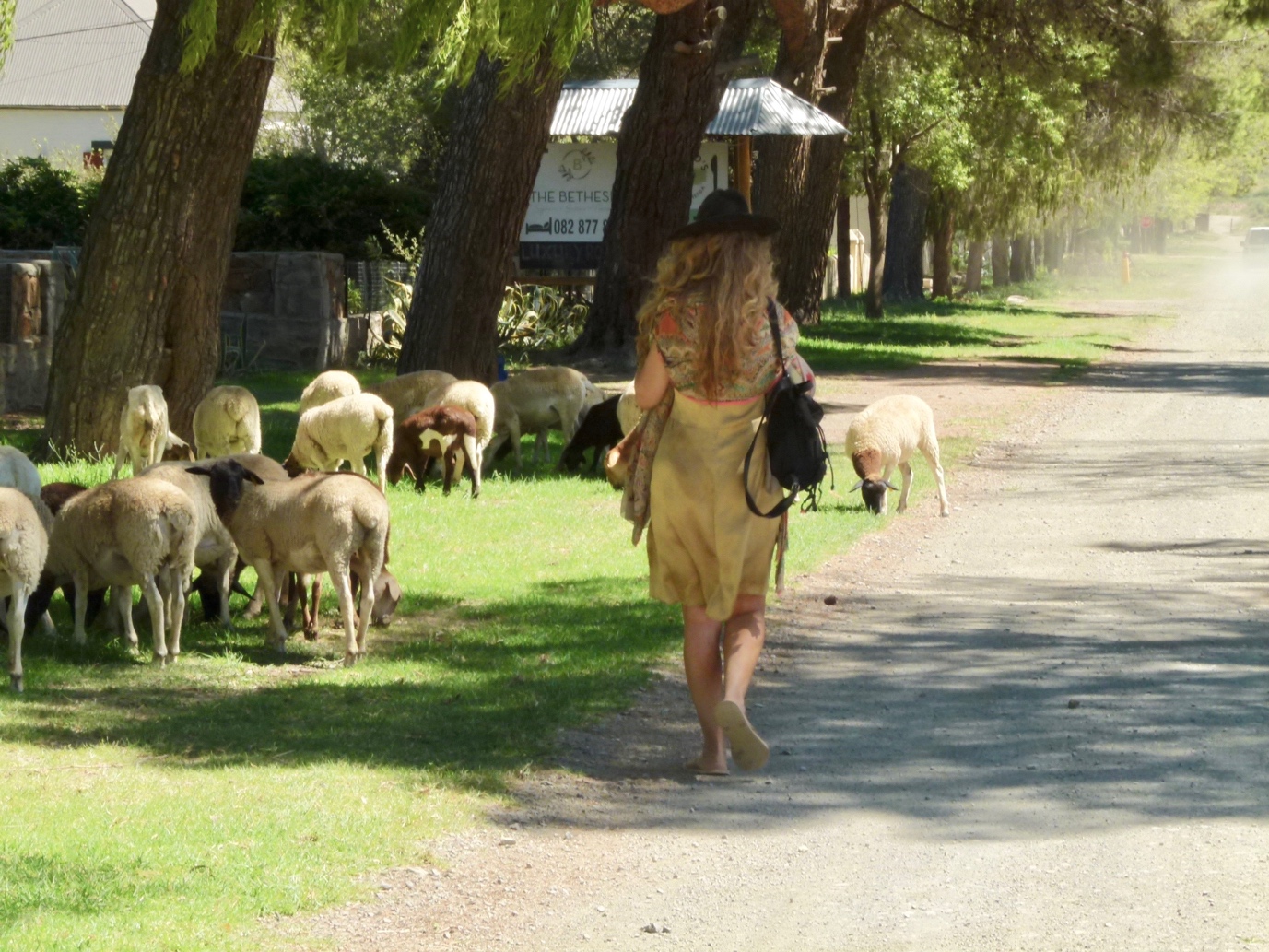 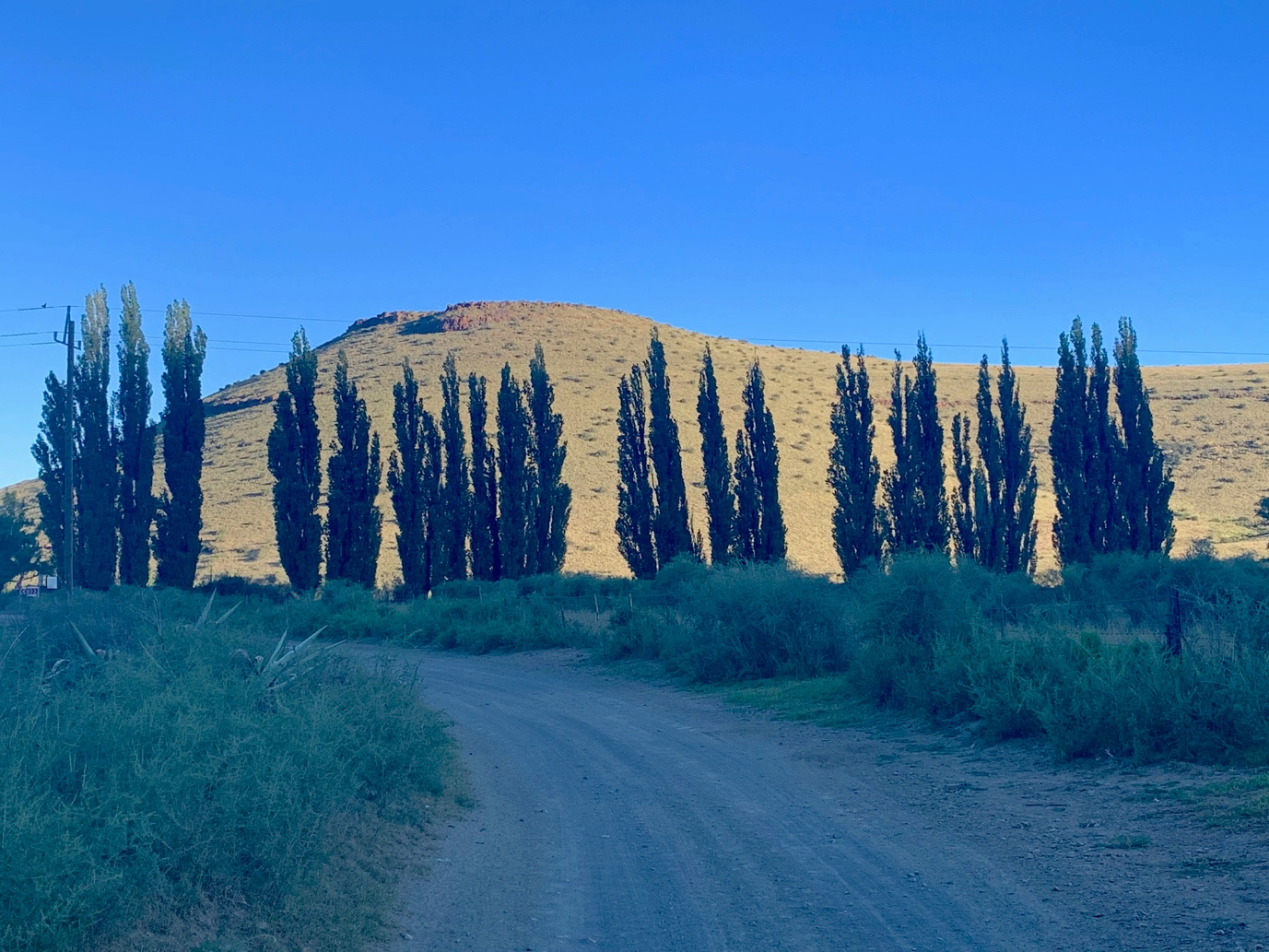 The dramatic approach to Nieu Bethesda with its hedgerow of giant cypresses. 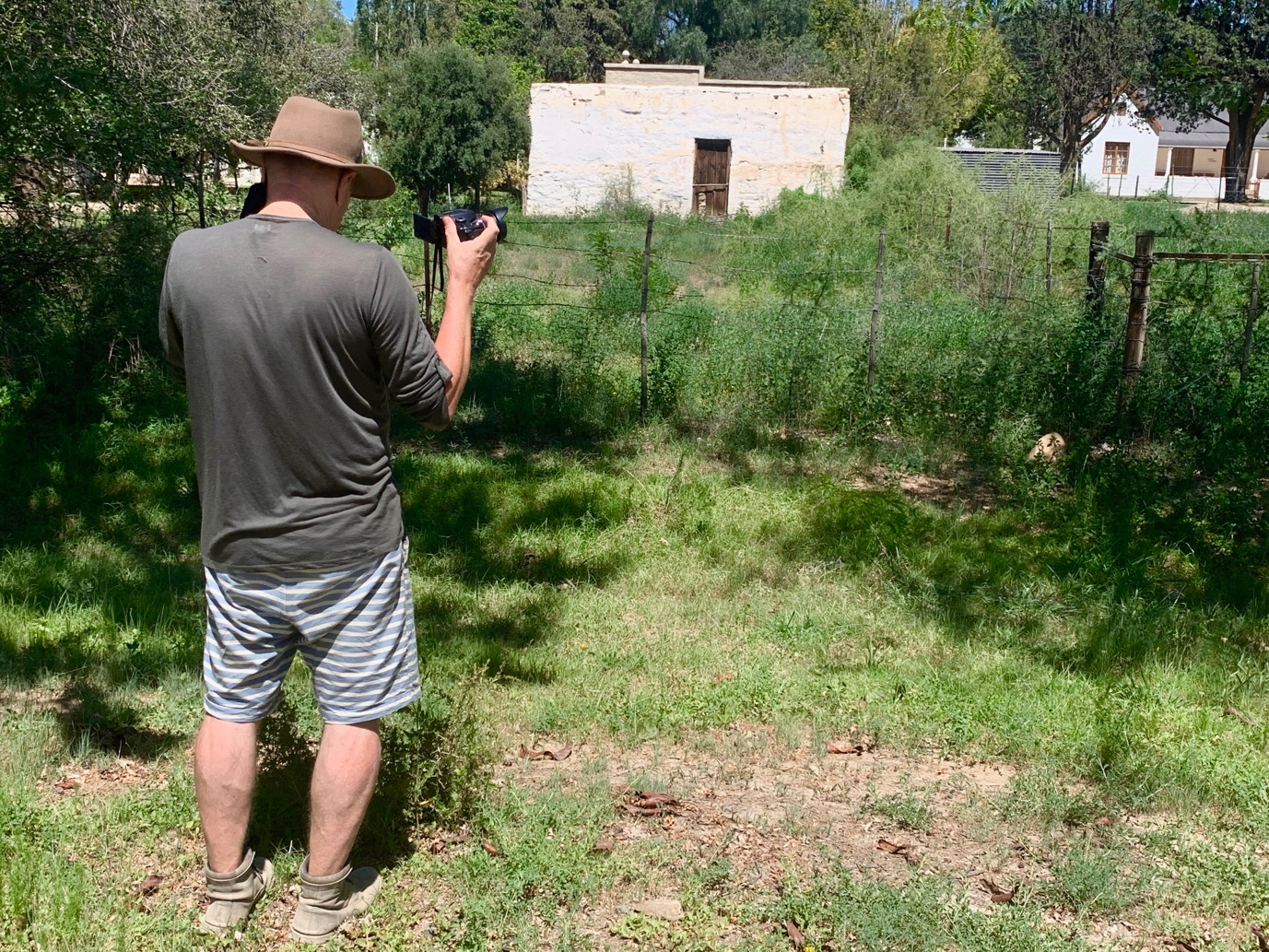 Material for a new set of paintings! 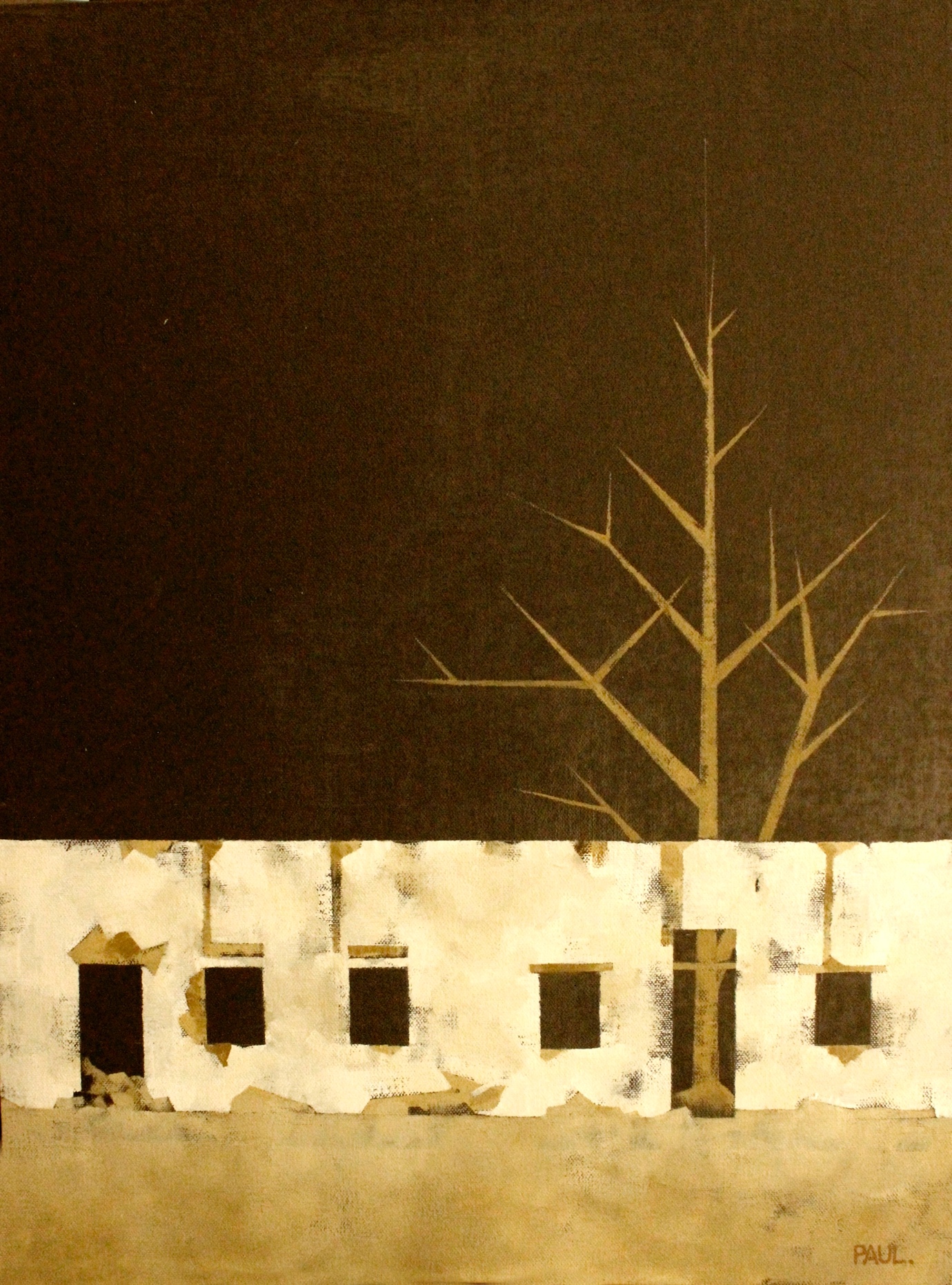 Now, I can continue to recount every magical detail of the next two days – the awesome locals who sold us a concrete owl with glassy green googly eyes (‘for putting a tea light inside’), the bizarre Owl House with its random selection of biblical figurines (owls, camels and other objects created by an eccentric local woman who died in 1973), the quaint canals that crisscross the entire town, the sculptors, artists, coffee roaster & beer brewer (same guy) we met and… and…. and…

But I think you need to make the trek and go see for yourself.

In fact, we may spot you there as we’ll also be back soon, seeing (some more) for ourselves.

And maybe, just maybe (probably definitely, actually) our next trip will be equally hot and dusty.

One way this time. 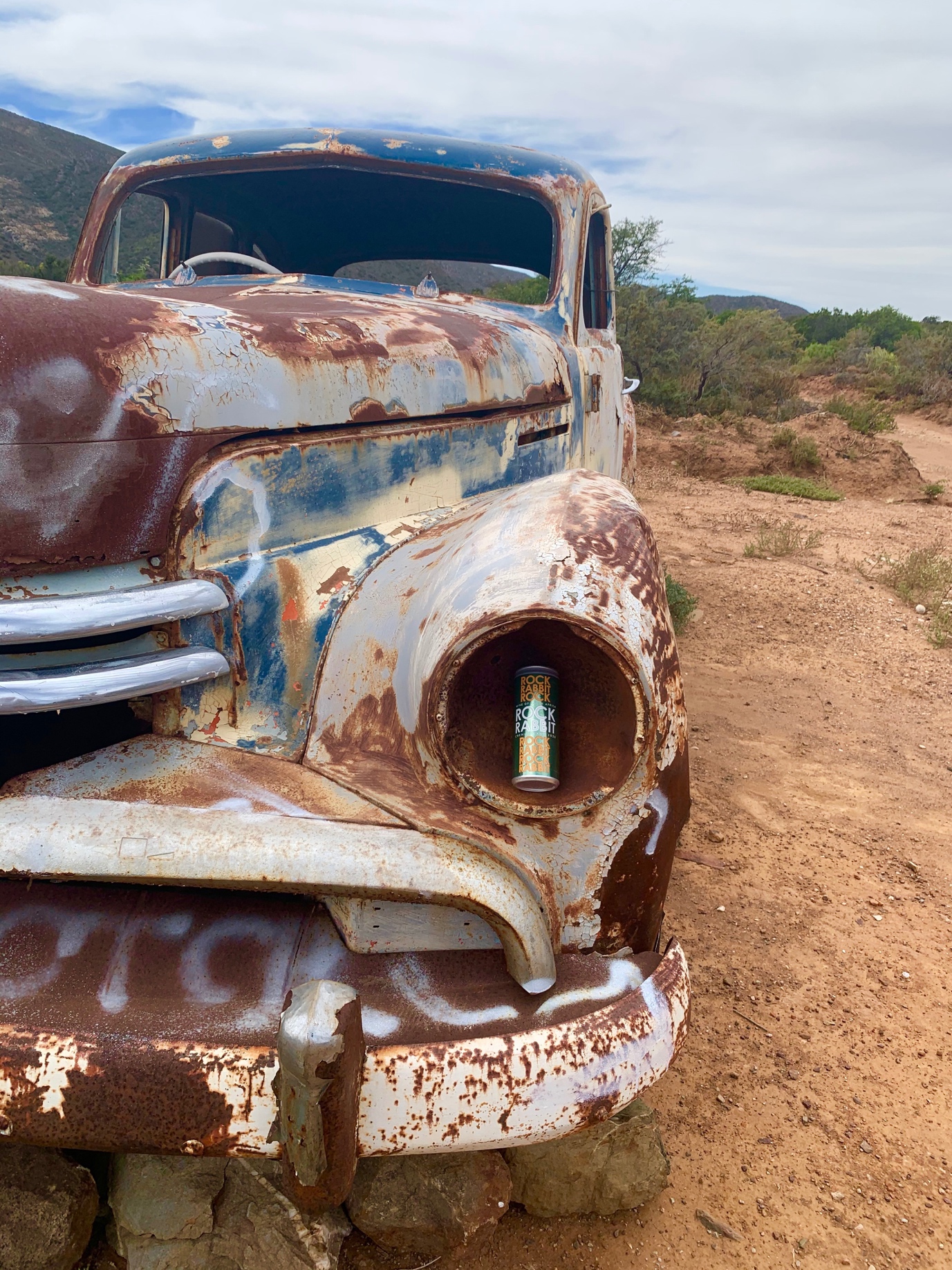 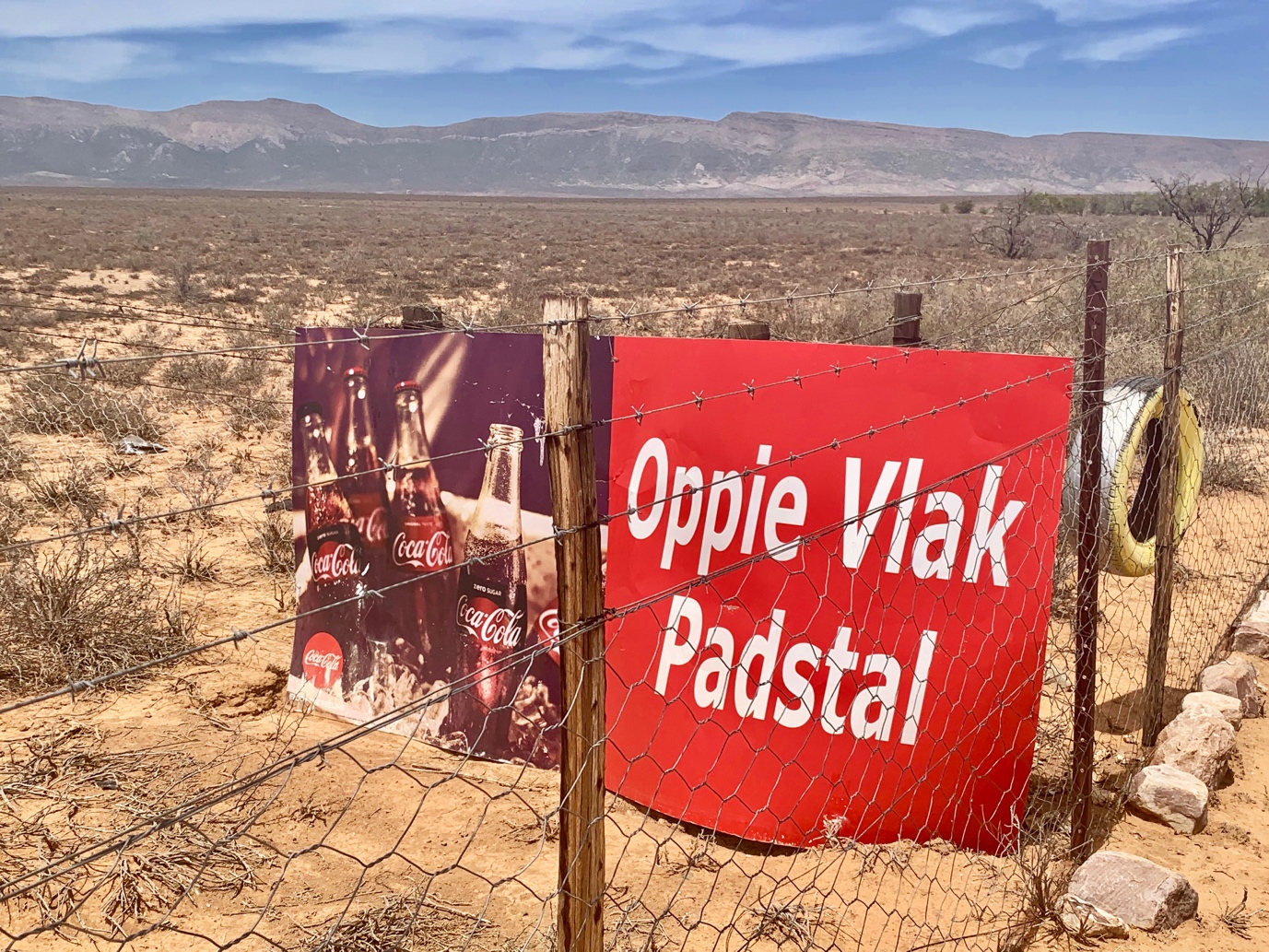 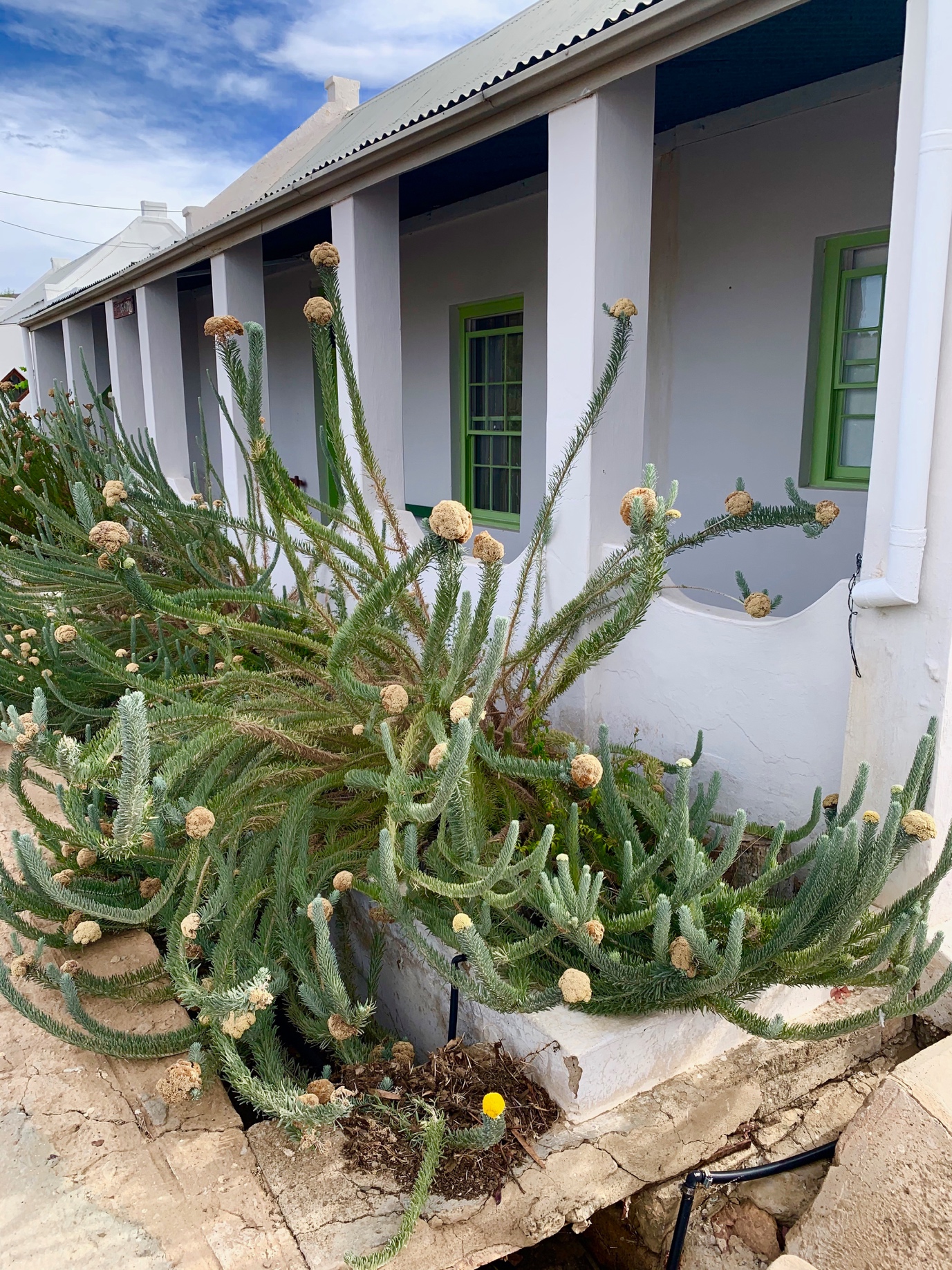 A typical restored house in the Karoo town of Prince Albert 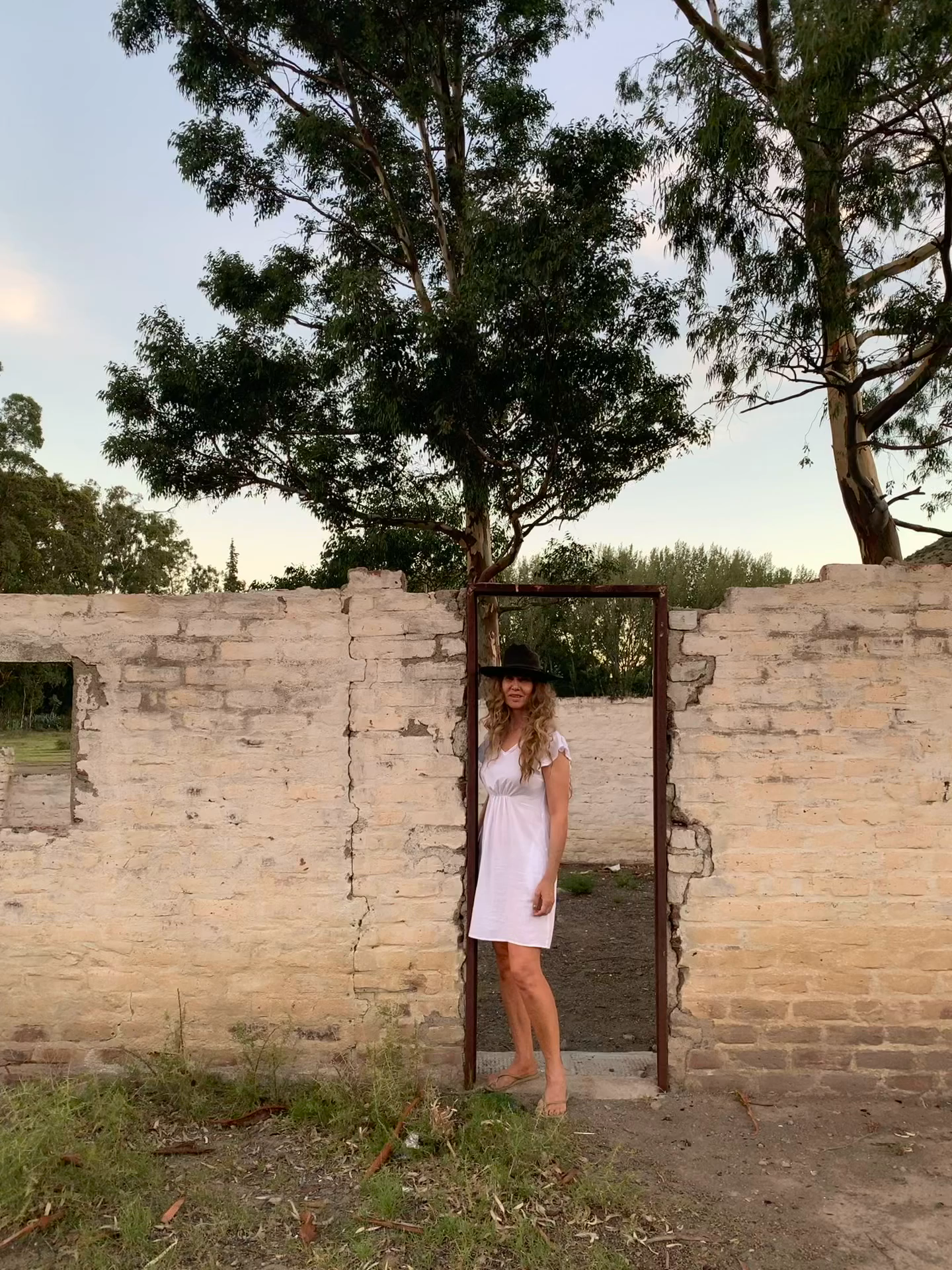