The inaugural Irish Food Writing Awards were presented in Fallon and Byrne in Dublin, with a post-event reception taking place in the Cellar Bar at the Merrion Hotel. Over 200 entries from 16 categories were received from Irish food and drink journalists, writers, bloggers and photographers from throughout the island of Ireland. Nine of the twenty seven international judges travelled to Ireland to attend the event, including Rene Redzepi from Noma in Copenhagen, food broadcaster Jay Rayner and Tom Parker Bowles.  The judges travelling to Ireland with the support of Tourism Ireland 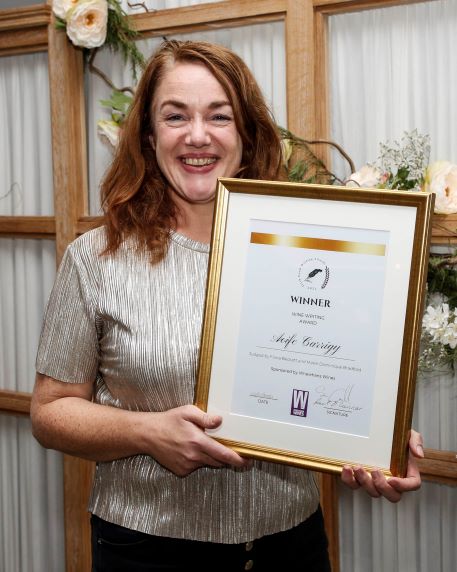 A number of drinks writers were honoured at the inaugural 2021 Irish Food Writing Awards in Dublin.  While this new competition is focused on those individuals who produce content about food in Ireland, there is also a section to acknowledge those writing about drinks for various publications and on-line.

The winner of the 2021 Wine Writing Award was Aoife Carrigy of the Irish Independent Weekend Magazine.  The Wine Writing Award was sponsored by Whelehan Wines and judged by international judges Fiona Beckett and Marie Dominique Bradford of Trois Fois Vins in Paris.  Aoife is a worthy winner, she has been writing about wine for many years and took over the wine column in the Irish Independent, from Corinna Hardgrave just over a year ago in 2020.  Many congratulations to Aoife on her great achievement.

The organisers of the event also paid tribute to legendary wine writer, Tomas Clancy. Tomas, for many years,  wrote the wine column for the (then) Sunday Business Post and was also a presenter on Sean’s Moncrieff’s Movies & Booze on Newstalk.  Tomas was the posthumous recipient of the Outstanding Achievement Award. It was accepted by his wife Claire Kearney and sons Tomas and Liam Clancy.

Other drinks writing awards presented on the night included Best Food Magazine or Supplement Award to Food & Wine Magazine, which is published by the Business Post. Editor Gillian Neilis was on hand to accept the award which was sponsored by Invest Northern Ireland. The spirits writing sponsored by Powercourt Distilleries was awarded to Oisin Davis who writes the spirits column for Food & Wine.The Beer Writing Award sponsored by Brú Brewery was awarded to Breandan Kearney for his work published in Good Beer Hunting.

The Irish Food Writing Awards were established to recognise the high quality of food and drink writing from throughout the island of Ireland, across print, broadcast and online.  In all categories, entries were accepted from the nominees themselves, or by a third party and were open to writers, journalists, bloggers and photographers.