Teeling Whiskey, has been honoured as the top rated Irish Whiskey for its 28-Year-Old Single Malt at the prestigious 2020 annual International Wine & Spirits Competition (IWSC). The International Wine & Spirit’s Competition (IWSC) is recognised as one of the world’s most prestigious accolades.  At this year’s IWSC competition, Teeling Whiskey received the highest rating of any Irish Whiskey with an overall score of 96 out of 100 and a gold medal for its 28-Year-Old Single Malt. This was closely followed by its Renaissance 18-Year-Old Single Malt with a score of 95 out of 100 as well as a further six silver medals and four bronze medals for other Teeling Whiskey products. 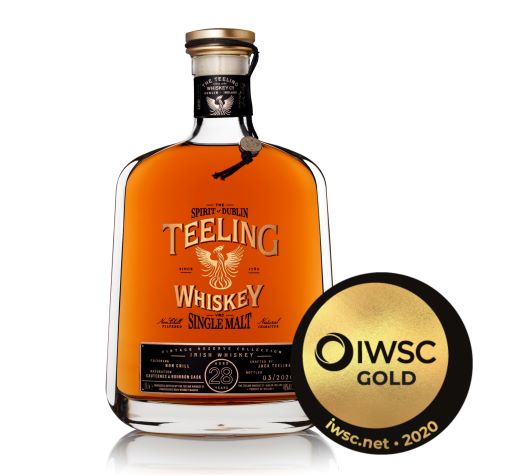 This brings the total to nearly 300 International Awards for their Irish Whiskeys including “World’s Best Single Malt” received at the World Whiskies Awards in 2019 .

The Teeling 28-Year-Old Single Malt Irish Whiskey was first distilled in 1991. This small batch bottling is limited to just 4,000 70cl bottles which were hand bottled in unique decanter bottles and come with their own certificate of authenticity. Retailing for €500 per 70cl bottle this is available in the Teeling Distillery in Newmarket, Dublin 8 as well as good independent off-licenses in Ireland.